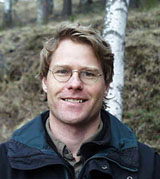 Hydrologic alteration throughout the arid and semi-arid western United States has modified the composition and functioning of riparian ecosystems. Accompanying widespread human changes to natural hydrologic regimes in the middle of this century has been the rapid invasion and establishment of the exotic shrub tamarisk. Tamarisk degrades riparian habitat through modifying soil development processes, depleting riparian ground and soil water, and forming monospecific stands that provide little structural complexity and poor wildlife habitat. Through mechanisms of habitat degradation and interspecific exclusion, combined with the tremendous production and dissemination of seeds and a wide ecological amplitude, tamarisk has become the dominant species across many floodplains throughout the western U.S. Dominance by this species threatens native biotic diversity of riparian ecosystems.

The objective of this study is to combine new field data with existing data sources to distinguish between three alternative hypotheses concerning the biotic and abiotic mechanisms by which tamarisk establishes and becomes dominant in four western ecoregions. This investigation will lead to the development of a process-based model that specifies the conditions under which tamarisk establishes and becomes dominant, and how this invasive species alters ecosystem properties over time. Understanding the interrelationships between flow modification, the decline in native species, and dominance by tamarisk is key to isolating the aspects of hydrologic regimes that should be modified to restore impaired riparian functions.

Sites will be selected to represent a full range of ecological conditions under which tamarisk has become established and persisted. Examination of sediment stratigraphy and GIS analyses of channel cross-sectional and planform change will be used to examine historic floodplain patterns and processes contributing to tamarisk dominance. A space-for-time replacement approach will enable the investigation of the processes of competitive exclusion during tamarisk succession in different physiographic settings.

General ecological models of tamarisk stand development will be generated and tested, based on data collected across a broad regional range. These models will contribute to a scientific basis for developing a management strategy for plow prescription that inhibits tamarisk dominance while facilitating the development of native plant communities. Accordingly, models will assist TNC in developing ecologically sound preserve management strategies, while providing a regionally relevant framework for other agencies.

Merritt, D.M. and E.E. Wohl. Downstream hydraulic geometry and channel adjustment during a flood along an ephemeral, arid region channel. Geomorphology, in press.

Merritt, D.M. and N.L. Poff. In prep. Quantification of the degree of flow regulation in regulated rivers.