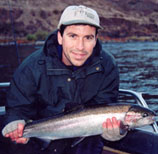 From the introduction: "Researchers have collected much information in recent years about the status, life history, and habitat relationships of the various subspecies of cutthroat trout. However, we know little about mechanisms determining regional patterns of cutthroat trout distribution and abundance. The spatial scale of prior and ongoing research is typically restricted to a single stream or stream segment. However, by assembling existing studies and surveys into a large database, we may identify large scale, regional patterns and the factors that determine cutthroat trout distributions. This information will allow identification of populations most at risk, identify the best possible candidate streams for population restoration, and identify the best areas in which to establish conservation reserves. The proposed research seeks to answer three central questions: 1) Can cutthroat trout distributions be predicted from upslope, landscape level variables such as parent geology, road density, and vegetation type, and can variables be identified allowing these fish to withstand invasions of non-native salmonids? Similarly, 2) Can general instream habitat characteristics be predicted from the landscape setting? This information will be used in a matrix-based demographic model incorporating current and potential populations, landscape features, disturbance regime, fish mobility, and known barriers to answer question 3) Can we identify areas (coldwater conservation reserves) where populations will most likely resist extinction?