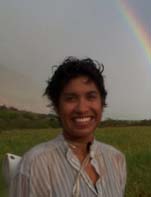 Natural ecosystems suffer increasingly from multiple exotic species invasions. Still, we know little about how new invasions affect the ability of exotic-dominated ecosystems to support native biodiversity and to resist additional invasions. We also know little about the importance of environmental context in shaping the effects of invaders and invasive species removal projects in exotic-dominated ecosystems. This two-year field study of French broom invasion in California grasslands will address these critical issues. In this study, I will evaluate: 1) the relationship between French broom invasion severity and native plant, arthropod, and avian diversity, 2) whether broom invasion facilitates or inhibits invasions by other exotic plants in these ecosystems, 3) how removing French broom from these exotic-dominated systems affects their ability to support native diversity and their susceptibility to new invasions, and 4) the importance of climate in shaping the effects of French broom removals. This project's findings will directly apply to the management of French broom invasions at TNC grassland, woodland, and riparian sites throughout California. My findings will also provide the foundation for broader consideration of how invasion dynamics in exotic-dominated sites affect conservation values and strategies. Finally, my findings about climate's effects on restoration outcomes can contribute to ongoing discussions about how climate change will affect conservation strategies.

Dr. Carla D'Antonio at the University of California, Berkeley, Department of Integrative Biology