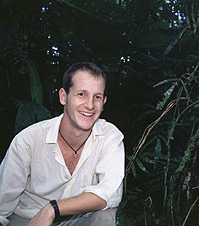 Although ecosystems are naturally dynamic, the rate at which humans are altering the world's abiotic and biotic conditions is unprecedented in recent history. Introduced species are an important type of human-induced disturbance and they have become a characteristic of most modern landscapes. Introductions of exotics can drastically alter the selective environment for native species, particularly for potential prey species whose behavioral repertoire and life-history traits may not be adapted to cope with a novel predator. Despite its importance to conservation, little is known about how different species respond to such sudden changes in their environment. In this study I will measure the behavioral responses of two native leopard frog species to introduced American bullfrogs (Rana catesbeiana) and centrarchid fishes (e.g., green sunfish, Lepomis cyanellus). The lowland leopard frog (Rana yavapaiensis) has declined throughout most of its native Arizona partly as a result of predation by bullfrogs and centrarchids. In contrast, the Rio Grande leopard frog (R. berlandieri), a Texas native, can co-exist with these exotics and has expanded into the range formerly occupied by lowland leopard frogs. One plausible mechanism for the different population responses of these two species to the same exotic predators is that the behavior and life-history of Rio Grand leopard frogs currently match their novel selective regime, whereas those of the lowland leopard frogs do not. To investigate this possibility, I will compare the ecology of both species in the field, and test the predator-avoidance responses of individuals from populations of each species that have been exposed to the introduced predators for increasing periods of time (0, 1-10, 11-20, and >20 years). This study will (1) reveal whether the decline of the lowland leopard frog is due to a mismatch between the organism's behavior/life-history and its (now altered) environment; (2) lay the ground-work for understanding the characteristics of species that will be most severely impacted by introduced species; and (3) determine the time necessary for a naïve prey species to detect cues associated with a novel predator. This work is part of a broader effort to develop novel management strategies for areas where the eradication of exotics is either biologically impractical or prohibitively expensive. Rather than attempt to restore 'ancestral' conditions, management efforts in such areas may be wiser to ensure the short-term persistence of species until they have adapted to their novel environment.

Novel selective environments for indigenous species as a result of biological invasions.