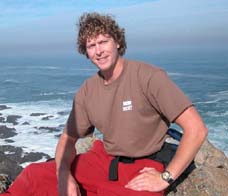 Salt marshes are one of the most important habitats in Eastern North America. In addition to being highly productive, marshes temper coastal flooding, filter terrestrial run-off, and act as nurseries for several commercially and ecologically important species. For nearly 5 decades, the prevailing theory underlying marsh management and conservation has assumed that bottom-up forces, such as nutrient availability, are the dominant community regulators. My research in southern marshes, however, challenges this paradigm and suggests that powerful trophic interactions are equally important. In VA salt marshes, I found that the common (100-300 ind./m 2 ) marsh snail, Littoraria irrorata, is capable of exerting strong, top-down control of salt marsh plants. Unless kept in check by its predators (e.g. blue crabs) this plant-grazing snail can transform one of the most productive ecosystems known into a barren mudflat.

Large expanses of southeastern salt marsh (100’s of km 2 ) are currently experiencing unprecedented die-back. I have surveyed 8 die-off areas (6 in GA, and 2 in LA) and found snail densities to exceed 2000/ m 2 . Given that blue crab densities have recently declined precipitously (40-80%) in southeast estuaries, it is possible that the cascading consumer effects shown in my small-scale experiments in VA may already be at work in southern marshes. No studies currently investigating marsh die-off, however, incorporate top-down effects into their experimental framework. Therefore, the primary objectives of this study are to: (1) provide an in-depth understanding of the extent to which snail grazing contributes to marsh die-off and (2) examine whether the decline in blue crab populations indirectly contributes to southern marsh die-off by releasing populations of plant-grazing snails from top-down control. In addition, I will examine the extent to which bottom-up factors, such as eutrophication and high soil salinities (chronic problems in many marsh ecosystems around the world), stimulate snails to graze down marsh grass. To address these goals, I will use (1) a multi-factorial experimental approach involving manipulation of both snail densities and the concentration of Nitrogen and salinity in marsh porewater at 2 die-off and 2 control sites in both GA and LA, (2) a broad-scale survey of snail densities and grazing intensity at >40 dieback areas spread throughout the southeastern US coast, and (3) a correlative approach employing long-term (~30 yrs) data sets of blue crab harvests, snail densities, and incidence of scarring on archived snail-shells.

The consequences of marsh die-off are far-reaching, since marsh grasses provide essential habitat and nutrients for almost all associated fauna. Results from the proposed study will allow marine managers to predict potential effects of eutrophication and predator depletion (e.g. over-harvesting of blue crabs) and to formulate effective multi-site strategies for marsh conservation. I am currently working with TNC marsh managers through the Efroymson workshop program as a scientific advisor to help identify and incorporate these and other threats into long-term conservation strategies using Conservation by Design. As a Smith Fellow, I will assist East coast TNC marsh managers to implement the completed eco-regional marsh conservation plan by acting as scientific advisor at local field sites. Because I am broadly interested in the generality of top-down control as a neglected factor in coastal marine systems, I would also like to examine TNC Conservation Area Plans for marshes throughout North America, and ask whether attention to top-down effects might improve TNC’s success. I view this component of my project as a collaborative venture, in which I act as a coordinator, and involve both site-based managers and TNC scientists as well.

Do top-down and bottom-up forces interact to cause massive die-off of southeastern salt marsh?