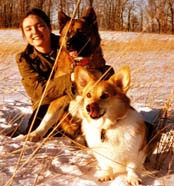 Humans have an obvious impact on the earth and its organisms as is evidenced by human-induced extinctions and changes to the landscape. This influence is felt at all levels of biodiversity, but is most often treated at the species level or above. Preservation of genetic diversity, however, should be an important focus of conservation efforts because it is the mechanism through which evolutionary modifications, such as adaptation and speciation, promote species persistence. Genetic diversity is directly affected by the movement and dispersal patterns of organisms across the landscape, which in turn is directly affected by the activities of humans. The products of these activities are translatable into Geographic Information Systems (GIS), which have been used with great success to map organismal distributions correlated with landscape features, but very rarely to visualize the corresponding patterns of genetic diversity and connectivity.

This two-year study will examine how processes such as evolutionary history, landscape features, and anthropogenic structures affect contemporary spatial genetic patterning. I will take a landscape genetics approach to examining the effects of habitat fragmentation on the preservation of evolutionary processes in the Black Hills ecoregion of South Dakota. By visualizing genetic discontinuities across the landscape, I will determine how habitat fragmentation affects the distribution of genetic diversity in northern leopard frogs (Rana pipiens). Correlating landscape and environmental features that act as barriers to migration, dispersal, and ultimately gene flow, will shed light on the importance of habitat fragmentation in disrupting evolutionary processes, without which populations lose the ability to evolve or adapt to environmental change. The results of this work will allow conservationists to design more permeable, and therefore more functional, landscapes by incorporating genetic information into reserve and corridor design.