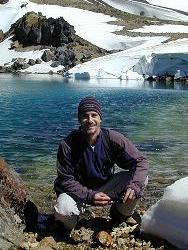 Invasive species have caused major global change, harming native species and communities throughout the world and inflicting enormous economic damage. Anticipating future threatens posed by invasive species requires a synthetic, predictive, proactive approach that forecasts the entire invasion process to further inform the identification and prioritization of critical conservation areas and the threats to them. My proposed research addresses this need by developing spatially-explicit population models that predict the rates and patterns of arrival, establishment and ecological impacts of two pervasive aquatic invaders – rainbow smelt (Osmerus mordax) and rusty crayfish (Orconectes rusticus) – which are invading freshwaters throughout the United States. Model development will involve formulizing the functional relationships between natural and anthropogenic factors and species arrival, establishment and integration into probabilistic functions, parameterizing the models using pre-existing data and validating the models using newly collected field data. Final products of this research will include an extensive database and geographic coverage of site-specific probabilities of arrival, establishment and potential ecological impacts of the invaders in lakes across their range and a process-based model that formalizes our ecological understanding of the key mechanisms responsible for the different stages of their invasion dynamics. Model simulations will be used to generate a number of future invasion scenarios (i.e., based on different rates of introduction and environmental change) and model outputs (GIS maps of vulnerable sites) will be distributed to watershed managers, thus providing a tool for decision-makers responsible for the management of freshwater ecosystems in the Midwest. Products from this research contribute directly to TNC’s Conservation by Design by providing a multi-tiered quantitative framework for informing the selection of conservation priorities aimed at minimizing the future ecological impacts of rainbow smelt and rusty crayfish invasions on native biodiversity.