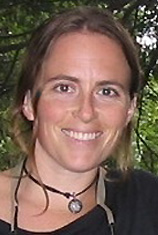 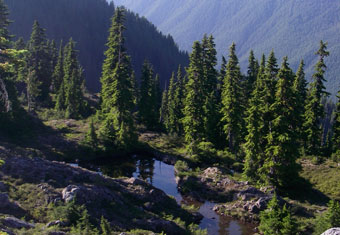 Climate change and its effects on biodiversity present unprecedented challenges to the conservation community, and call for the development of new climate adaptation strategies that promote ecosystem resilience to change. Interactions between climate change and other stressors increase ecosystem vulnerability, so one promising approach is to focus conservation efforts on eliminating stressors that can be proactively managed. My research focuses on one such case in mountain regions of the Pacific Northwest, where wetland communities are currently “squeezed” between two interacting human threats: rapidly changing climate and introduced fish. Sport fish were introduced to formerly fishless mountain wetlands during the last century for human recreation, and now exclude native amphibians and invertebrates from many deep, perennial ponds and lakes. As a result, these native species currently inhabit only the remaining, mostly shallow (fishless) habitats that may be extremely vulnerable to climate-induced drying. Fish removals have been successful and are consistently followed by rapid amphibian recolonization and the recovery of invertebrate communities in restored habitats. Fish removals therefore represent an adaptation strategy to buffer the effects of climate change and restore resilience to these rich and unique ecosystems. However, fish removals are expensive, so a critical step is to determine where to allocate limited resources most effectively. My research brings together tools from four active disciplines – climatology, hydrology, bioinformatics, and population ecology – to identify priority regions to target fish removals. As a test case of a proactive climate adaptation strategy, this project will serve as a model for future conservation efforts in many regions and ecosystems, and the methods that my collaborators and I develop will advance the field of forecasting ecosystem responses and resilience to climate change. On the ground, the products developed in this research will be immediately useful to land managers tasked with managing conflicting demands to provide for human recreation while preserving biodiversity in the face of climate change across large expanses of treasured and protected lands.

Dr. Alan Hamlet at the University of Washington and Drs. Wendy Palen and Nicholas Dulvy of Simon Fraser University, Lara Hansen of EcoAdapt and Dr. Michael Adams of the U.S. Geological Survey