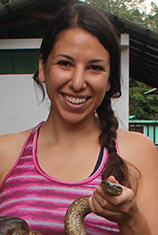 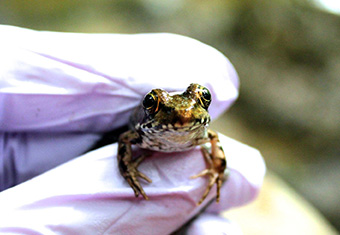 Two decades of research on the amphibian-killing fungus Batrachochytrium dendrobatidis (Bd) have shed light on Bd’s distribution, biology, and how it causes the disease amphibian chytridiomycosis. We now know that Bd has been spread all over the world mainly through human movement of amphibians (including for research, pets, and food), and that Bd is a “generalist” pathogen: it can infect more than 500 species of amphibians. However, we still don’t have a complete understanding of what makes some amphibians so susceptible to Bd (they get really sick and die) while other amphibians seem to be resistant or tolerant (they don’t get as sick and they survive). What is most confusing is that even within a single amphibian host species, there can be a wide range of effects from infection with Bd, varying from extreme susceptibility to apparent resistance. In the western United States, Bd has been implicated in die-offs of the yellow-legged frogs Rana muscosa, R. sierrae, and R. boylii. For endangered species like yellow-legged frogs, captive breeding to produce “rescue colonies” (e.g., in zoos) is currently the main conservation/rescue measure, with the hope that captive individuals can eventually be reintroduced into the wild. However, when Bd is the biggest threat to these species, this strategy might not work: even where susceptible host species have gone completely extinct, Bd persists in the wild on other amphibians that are still out there (“reservoir” hosts). Indeed, Bd was implicated in the very low success of captive Boreal toad reintroductions in Colorado in 2010-2014. Therefore, reintroduction of captive individuals back into the wild comes with the risk of future Bd outbreaks, unless we can ensure that the animals we release are resistant to Bd. In addition, with limited conservation resources and funding, it is difficult to actively monitor and conserve all wild populations. Gaining a better understanding of potential Bd susceptibility or resistance would allow for more effective amphibian conservation and management, e.g., protection strategies could be focused on the most susceptible wild populations.

With this quandary in mind, I will design a Bd susceptibility genetic screening test that will serve as an amphibian conservation tool, similar to disease susceptibility genetic screening tests that are used in humans (e.g., 23andme). To accomplish this, I will perform my postdoctoral research on the genetic signatures of Bd resistance in yellow-legged frogs. First, I will conduct a controlled Bd infection experiment on laboratory-reared R. boylii collected from a Central California population that has rebounded following a Bd outbreak and decline in the 1980s. While R. boylii is considered near-threatened, R. muscosa and R. sierrae are listed as endangered and cannot currently be used in experiments. Fortunately, this type of experiment was previously done on R. muscosa and R. sierrae, and the datasets are available to be used in later comparative analysis. My experiment will serve two purposes: (1) to test for Bd resistance in the rebounded R. boylii population, and (2) to determine the genetic basis of response to Bd infection. To accomplish this second purpose, I will compare gene expression between infected and control animals, which I will use to identify which R. boylii genes are “activated” or “deactivated” (upregulated or downregulated) during Bd infections. These will serve as candidate yellow-legged frog resistance genes. Next, I will determine which genes have played a clear role in the evolution of Bd resistance by determining which of the candidate genes show evolutionary responses to historical Bd outbreaks in yellow-legged frogs. I will accomplish this through sequencing and analyzing these candidate genes in museum specimens from pre- and post-epizootic populations of R. boylii. Candidate genes exhibiting evolutionary changes (i.e., changes in allelic or genotypic diversity/composition, and signatures of positive selection following Bd outbreaks) will be used in development of the Bd susceptibility genetic screening test. This Bd ‘Litmus Test’ will be integral to frog conservation efforts as it will open doors to selective captive breeding and reintroductions, as well as effective screening and management of vulnerable wild populations.

Leveraging the Past to Preserve the Future: Finding a Litmus Test for Amphibian Disease Susceptibility