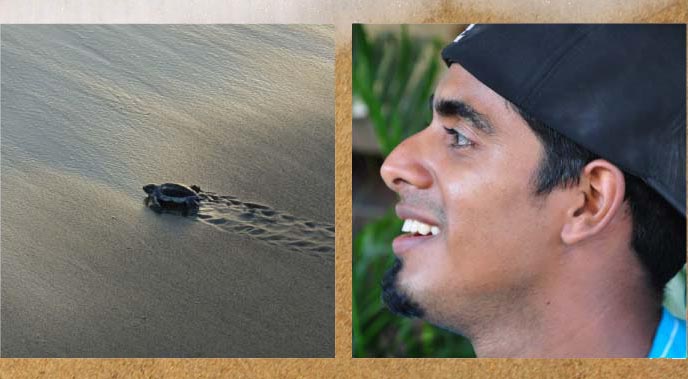 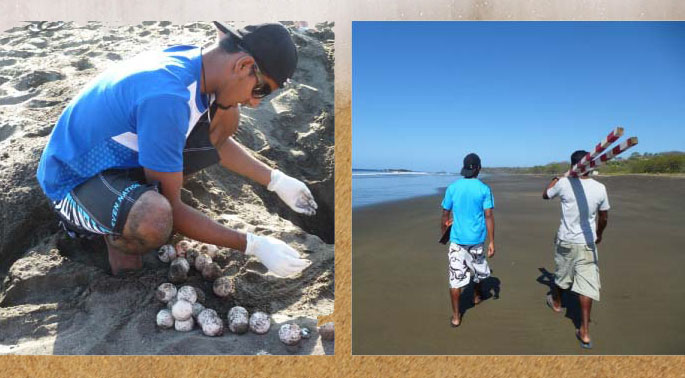 Jairo was born on March 22nd, 1987, in the province of Limón. He grew up in the picturesque community of Gandoca, an isolated Caribbean farming community inside the National Refuge of Wildlife.

He encountered sea turtles for the first time when he was eight, when his school class took part in the release of young sea turtles on Gandoca beach.  Watching the little turtles running towards the sea, facing dangers, it was love at first sight.

While at high-school, he participated in several activities related to sea turtle conservation whenever he could. These included patrolling Gandoca beach at night, conducting morning surveys and taking eggs to a safe area to protect them from poachers. He later became a volunteer for a local organization working on sea turtle conservation in the community of Gandoca, as well as in the beaches of Cahuita, Pacuare, Ostional, Playa Grande, Osa Peninsula and Moín.

Moín is an 18 km-long beach on the Atlantic coast and an important nesting ground for several sea turtle species, including leatherbacks and hawksbills. Every year, hundreds of female sea turtles return to Moín, where they were born, to lay their eggs. Jairo dreamed to one day be able to see the little sea turtles he released return as adults.

The Costa Rican Wildlife Sanctuary (CRWS) conducted regular walks along Moín beach to collect sea turtle eggs and put them in a safe place away from poachers. In 2011, the Wider Caribbean Sea Turtle Conservation Network (WIDECAST), an international organization for the conservation of sea turtles, hired Jairo to join the CRWS efforts. He was soon made aware of the dangers of working on Moín, which suffered from egg poaching and was a known location for other illegal activities such as drug dealing.

In 2012, in a successful initiative to reduce the level of poaching, CRWS hired 10 former poachers to join Jairo and others on the monitoring program. The police accompanied the beach surveys  to ensure the safety of the group given the dangers of the location. However, later in the year, the police were unable to participate in the beach patrol program which led to its termination. Despite this, Vanessa Lizano, from CRWS, and Jairo, passionate of the aims of the program, continued with the beach patrols. Vanessa was forced to stop when poachers, whose activity was being disrupted, threatened her son. Jairo continued with the monitoring but for safety restricted his activity to daylight hours only.

On May 31st 2013, Jairo went to Moín beach with a group of eight friends and volunteers, who remained in the car while he patrolled the beach. When driving back to town they found a tree branch blocking the road. They didn’t realise it was an ambush. As soon as Jairo got out of the car, he was attacked by several men wearing balaclavas, who were hidden in the forest waiting for him. The girls of the group were taken to an isolated location where they were robbed and raped, while Jairo was taken back to Moín beach where he was brutally murdered. The next morning, his body was found laying on the sand. He was only 26 years old.

Jairo has become a hero and a symbol for environmental conservation in Costa Rica.

The trial for Jairo’s murder started in October 2014. Seven men were accused and taken to the stand, but were absolved in 2015 due to irregularities during the investigation. In January 2016 a new trial started and on 29th of March 2016 four of the seven men were found guilty and sentenced to 90 years in prison.

The SCB Marine Jairo Mora Sandoval Award honors his commitment to marine conservation and it is given for bravery associated with an outstanding contribution to the field of marine conservation, with particular emphasis on responsible and educated scientific endeavor, public engagement and conservation activism.