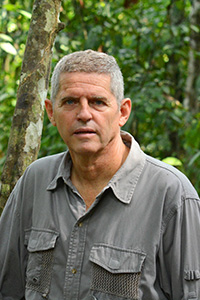 Luis Arranz was born in Tenerife, Spain in 1956. He studied biology in the Universidad Autónoma de Madrid and in 1980 he began work in Equatorial Guinea, first doing tree census and then for the Project Men and Nature funded by the Spanish cooperation to create a network of protected areas in the country till 1986.

Between 1986 and 1990 worked in South America, redacting the management plan for Huanchaca National Park (now Noel Kempf Mercado NP) in Bolivia and looking for places to create protected areas in Bolivia Brazil and Venezuela.

Since January 2017, he works for WWF in Dzanga Sangha Protected Areas in the Central African Republic.