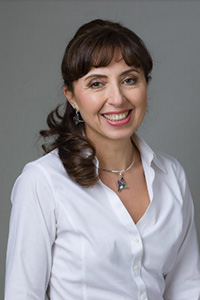 Cristiana  Pașca  Palmer  was  appointed  by  the  United  Nations  Secretary‐General  as  the  Executive  Secretary of the Secretariat of the Convention on Biological Diversity, starting 17 March 2017.    Prior to her appointment, Ms. Paşca Palmer served from November 2015 to January 2017 as Romania’s  Minister  for  Environment,  Waters  and  Forests,  during  which  time  she  also  headed  the  Romanian  delegation  at  the  2015  Paris  Climate  Conference,  where  she  signed  the  agreement  on  behalf  of  Romania, the 2016 Marrakech Climate Change Conference and the 2016 UN Biodiversity Conference in  Cancun.  As  Head  of  the  Ministry  of  Environment,  Ms.  Paşca  Palmer  oversaw  eight  subordinated  agencies–including  the  National  Environmental  Protection  Agency,  the  Environmental  Fund  Administration, the National Forest Authority, Romania’s Water Administration, and the Romanian  Meteorological Administration—totaling approximately 30,000 staff and a $250 million annual budget.     She  has  extensive  experience  in  global  policymaking  and  in  coordinating  the  implementation  of  environment  and  sustainable  development  policies,  programmes  and  projects  at  the  national  and  international levels.      Ms. Paşca Palmer is a former Head of the Climate Change, Environment and Natural Resources Unit  within the European Commission’s Directorate‐General for International Cooperation and Development  (DEVCO‐EuropeAID) between 2011 and 2015. There she was responsible for EuropeAid’s global policies  and  programs  supporting  biodiversity  conservation  and  ecosystems  management  in  developing  countries,  in  addition  to  its  global  policies  and  programs  on  climate  change,  forests,  water  and  sanitation, and green economy. To operationalize this work, she managed a $2.8 billion budget, with a  large portion allocated towards biodiversity. One of the most significant biodiversity related efforts  conceived and led by Ms. Paşca Palmer was the design of the “EU’s Biodiversity for Life Initiative  (B4Life)”,  a  $1.2  billion  comprehensive  flagship  program,  financing  innovative  initiatives  linking  biodiversity conservation with food security and green economy transformation. As well at the EU, she  worked  as  a  Policy  Analyst  on  International  Relations  and  the  Western  Balkans  in  the  European  Commission’s Directorate‐General for Climate Action, from 2010‐2011.

Ms. Pașca Palmer is a multidisciplinary practitioner and academic in international development with a  strong focus on green economy and environmental sustainability, in addition to business management,  international negotiations and environmental diplomacy. She possesses comprehensive knowledge of  the UN system, especially with regards to the UN’s work on the environment and development. Prior to  being appointed Executive Secretary of the Convention on Biological Diversity, one of her distinguished  roles within the UN was her election as Vice‐President of the United Nations Environmental Assembly’s  Bureau (UNEA 1), where she participated in the preparatory work for UNEA 2 and attended as a key  note speaker. She was also one of two appointed EU negotiators on behalf of the European Commission  for the Rio+20 Summit in 2012.    During a professional career spanning over twenty years, Ms. Pașca Palmer has also held various  positions with local and international civil society organizations in Eastern Europe, with the World Bank  Group/International Finance Corporation in Washington D.C., and has worked in academia as a policy  researcher and teacher at Harvard University and the Fletcher School of Law and Diplomacy. A social  activist at heart, she was the founder and president of Green Cross Romania and was Country Director  Romania for Fauna & Flora International (FFI), often referred to as the world’s first conservation society,  where  she,  among  other  things,  managed  FFI’s  in‐country  operations  in  Romania  during  the  implementation  of  the  $8.8  million  GEF  and  World  Bank  Biodiversity  Conservation  Project,  which  pioneered the first system for protected areas' management post‐communism.    Born in 1968, Ms. Pașca Palmer holds a PhD in International Relations from the Fletcher School of Law  and Diplomacy in the United States with a focus on development economics, international business  management, and environmental sustainability. She also holds a Master in Public Administration from  the John F. Kennedy School of Government at Harvard University and a Master of Science in Systems  Ecology and Management of Natural Capital from the University of Bucharest. Ms. Pașca Palmer is the  recipient of prestigious US and European academic scholarships (Edward S. Mason, Joint Japan/World  Bank, Marie Curie, and Henry R. Luce), and was awarded by former President Mikhail Gorbachev, the  Gorbachev  Award  for  "significant  contributions  to  the  environment."  In addition  to  her  native  Romanian, Ms. Pașca Palmer is fluent in English and French. She enjoys the outdoors and has a great interest in ethnography, folklore and traditional knowledge