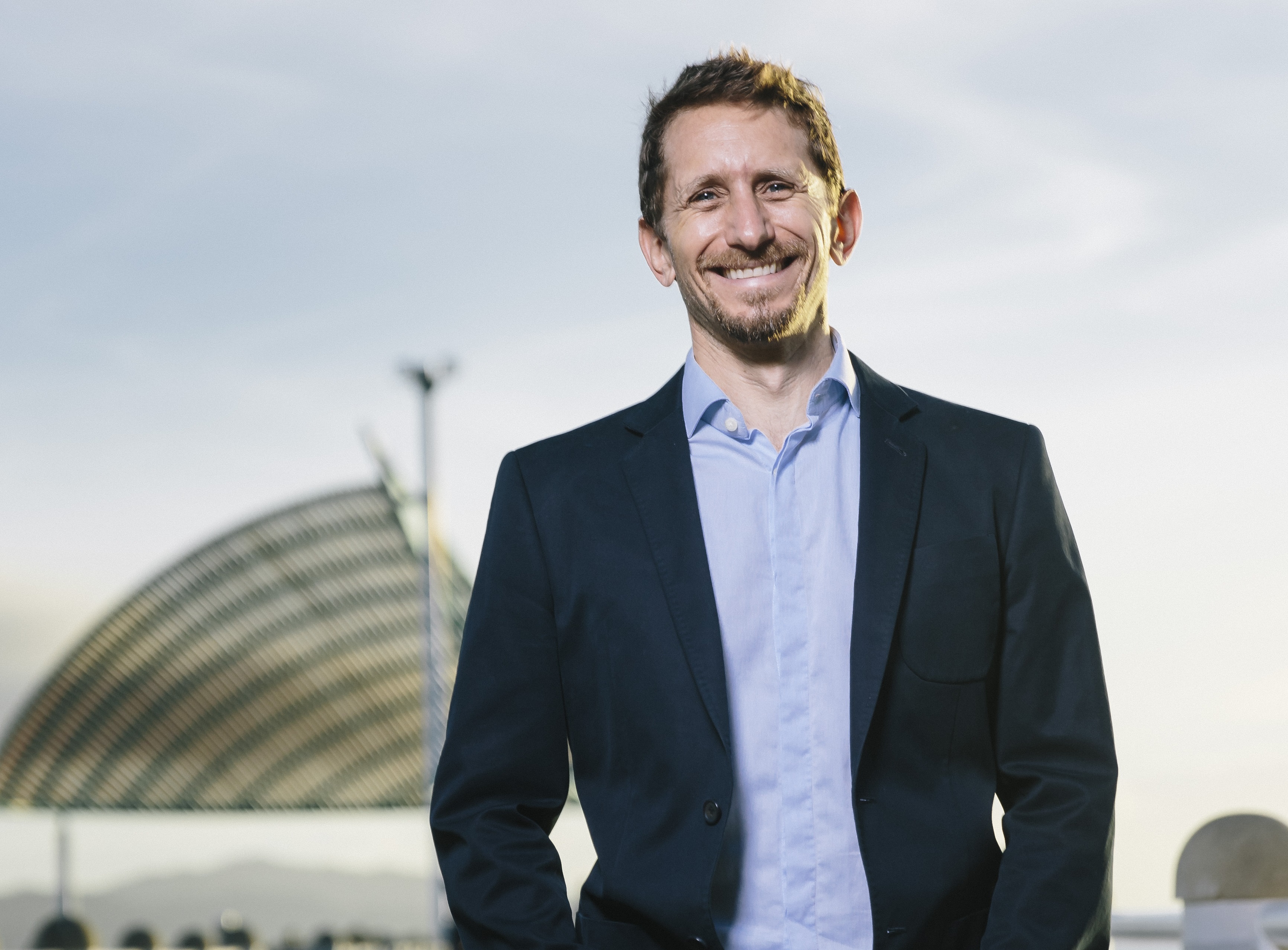 Joshua Cinner began his work as an environmental social scientist while serving as a Peace Corps Volunteer in Jamaica in the mid 1990s.  He has since completed a Master’s degree from the University of Rhode Island and a PhD from James Cook University.  Josh’s research explores how social, economic, and cultural factors influence the ways in which people use, perceive, and govern natural resources. His background is in human geography and he often works closely with ecologists to uncover complex linkages between social and ecological systems. He has worked on human dimensions of marine conservation in Australia, Jamaica, Mexico, Papua New Guinea, Kenya, Madagascar, Tanzania, Seychelles, Indonesia, Mozambique, and the USA. He has published >115 peer-reviewed journal articles and a book published by Oxford University Press. Josh is now a Full Professor at James Cook University. He currently holds an ARC Future Fellowship, and is a recipient of the 2015 Pew Fellowship in Marine Conservation and the 2017 Elinor Ostrom Award on collective governance of the commons. You can follow Josh on Twitter at @JoshuaCinner, check out his Pew Fellowship project here, and check out his group's current research initiatives here! 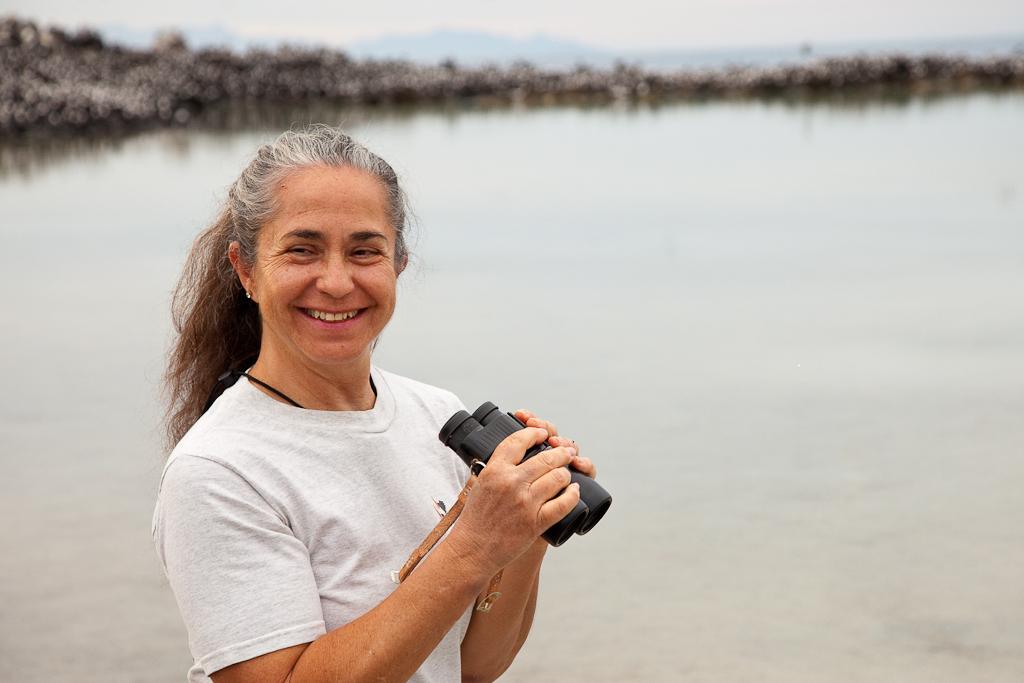 Title: "Seabirds of the Gulf of California, Mexico: what have they taught us?"

Enriqueta Velarde was born and raised in Mexico City, and has worked since 1979 studying seabird ecology. She has visited Isla Rasa every spring for the past 39 years to measure, weigh, census, band, and observe the seabirds. She has also researched the interrelationship of bird population size to anchovy and sardine stocks in the Gulf of California. Velarde and her team have been successful in convincing fishermen to stop illegally ransacking birds’ nests to sell the eggs, and they have totally eradicated invasive rats and mice that had a devastating effect on the seabird population. Additionally, Enriqueta has established a close collaboration with the indigenous Mexican Comcaac community and worked with them and biologist colleagues to train and empower the Comcaac to manage their own natural resources in the towns of Punta Chueca and El Desemboque in the state of Sonora along the west coast of the Gulf of California. She has done similar work with groups of local women in the town of Bahía de los Ángeles in the state of Baja California. At present, she is full time researcher at the Universidad Veracruzana in Mexico. Her main interests are seabird life history, genetics, and adaptations to present and past food availability, and nesting conditions for their long term survival. She is also interested how seabirds can be used to learn about the ocean conditions and as sentinels of the environment as well as indicators of forage fish populations, for management purposes. Also of interest to her are the sources of seabird mortality due to human activities and how to mitigate them. Velarde’s book, Islas del Golfo de California, was also used as the base for the designation of the Gulf of California islands as a World Heritage site! 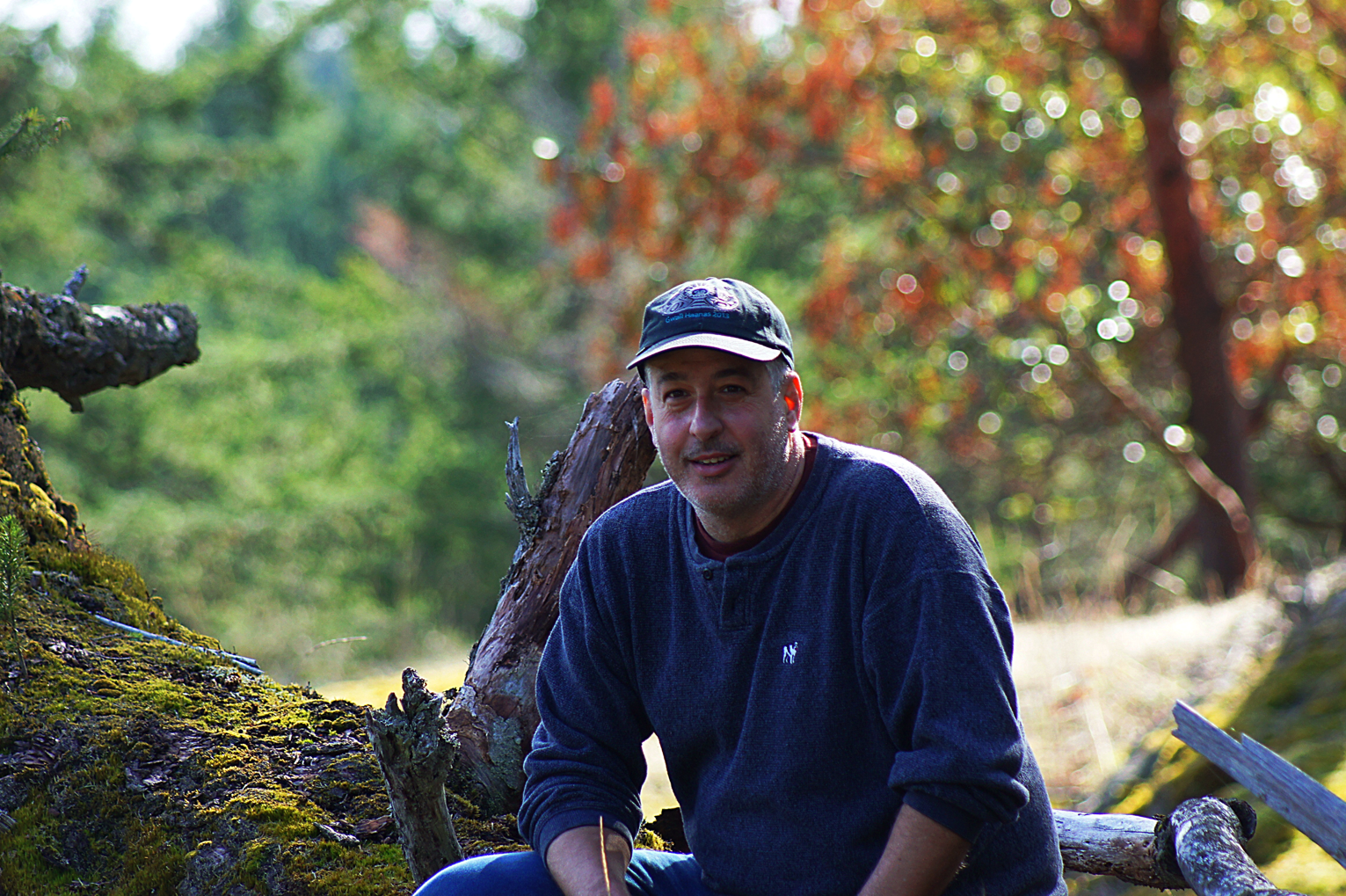 Title: "Conservation at the edge: interdisciplinary science for nature and people"

Phillip Levin is the lead scientist of The Nature Conservancy, Washington and a Professor-of-Practice in the School of Environmental and Forest Sciences at the University of Washington. Dr. Levin is a conservation scientist who is interested in bridging the gaps between theory and practice in conservation, and developing modeling and statistical approaches to inform conservation and management of ecosystems. The main focus of his current work is developing interdisciplinary tools to inform conservation of marine, aquatic and terrestrial ecosystems and the communities that depend on them. Prior to joining the Nature Conservancy and University of Washington, he was the Director of Conservation Biology and a Senior Scientist at NOAA Fisheries’ Northwest Fisheries Science Center in Seattle, WA, USA. Levin served as the scientific lead of NOAA’s Integrated Ecosystem Assessment efforts in the California Current Large Marine Ecosystem and Puget Sound. In the course of this work, he has led the development of new analytical tools for characterizing ecosystem health and forecasting the cumulative effects of coastal zone management and climate change on ecosystems. Dr. Levin received the Department of Commerce Silver Award and NOAA’s Bronze Medal for his work on marine ecosystems, and the Seattle Aquarium’s Conservation Research Award for his work in Puget Sound. He has published over 150 scientific papers in peer-reviewed journals, book chapters and technical reports, and edited the recently published book, “Conservation of the Anthropocene Ocean: interdisciplinary approaches for nature and people”.  His work has been featured in such news outlets as NPR, PBS, the BBC, MSBNC, The Economist, among others. Levin recently served as President of the Western Society of Naturalists, and has served on numerous editorial boards and scientific advisory panels. Levin received his Ph.D. in zoology from the University of New Hampshire in 1993 and was a postdoctoral fellow at the University of North Carolina. You can follow him on Twitter at @ConsLevin and find more information on his website here. 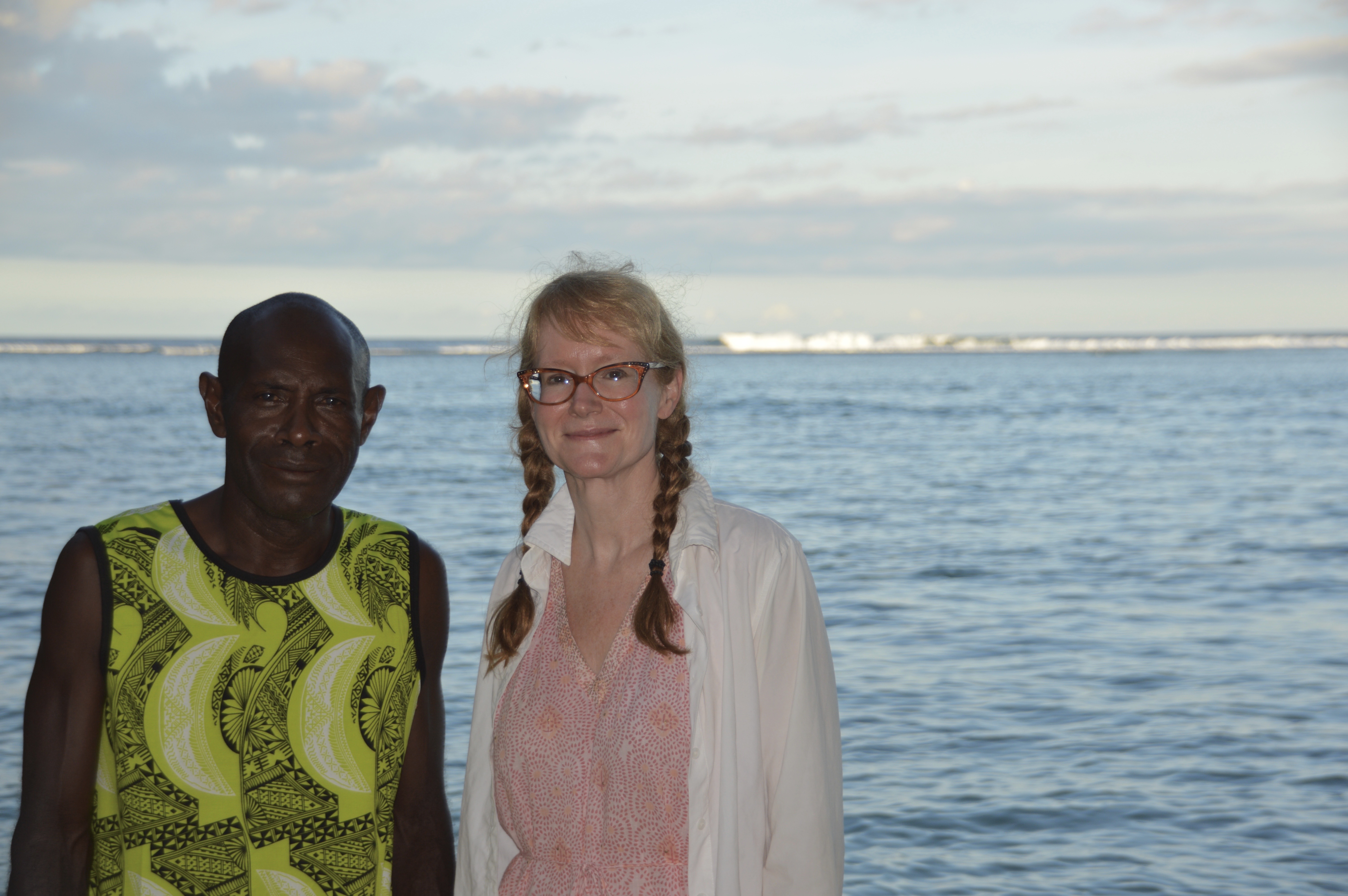 John Aini is the founder and director of Ailan Awareness, an indigenous NGO in New Ireland, Papua New Guinea. He is also a Mai Mai, a traditional cultural leader, in New Ireland. Trained in Fisheries Science at the National Maritime College, Aini is one of the foremost experts on indigenous knowledge of marine environments and conservation practice in the Melanesian Pacific. He is the recipient of the Seacology award for international conservation and has served as a partner to The Nature Conservancy, The Wildlife Conservation Society, and Global Witness during their work in his country. Mr. Aini has held awards from the Asian Development Bank, The United Nations, The United States Ambassadors Fund for Cultural Preservation, The Christensen Foundation, and Columbia University. He is an advisor to the National Fisheries College, The National Fisheries Authority, and has worked with the IUCN to teach conservation workers about the importance of indigenous management practices.

Paige West holds an endowed chair and is the Claire Tow Professor of Anthropology at Barnard College and Columbia University. For the past twenty-one years she has conducted research on conservation in the Melanesian Pacific. West is the author of three books, the editor of five more, and the founder and editor of the journal Environment and Society.  She is the recipient of numerous awards and fellowships including the American Anthropological Association’s Anthropology and Environment Junior Scholar award (2002), the American Association of University Women Junior Faculty Fellowship (2004), and the American Council of Learned Societies Faculty Fellowship (2004), the Rockefeller Foundation's Bellagio Fellowship (2006), The Mack Lipkin Man and Nature Fellowship at the American Museum of Natural History (2013), and the Tow Family Foundation Professorship (2016). She has served as a distinguished lecturer for Phi Beta Kappa (2017/2018), the United States National Social Environmental Synthesis Center (2016), and the Leonard Hasting Schoff Memorial Lectures (2013). In 2003, she founded the Seminar on Politics, Society, Environment and Development at Columbia University, and in 2012, she became the chair of the Ecology and Culture University Seminar at Columbia. West currently serves on the board of directors for the Center for the Study of Social Difference, The University Seminars of Columbia University, the Barnard College Center for Research on Women, and as co-chair for the Pacific Climate Circuits project. She is the past chair of the Association of Social Anthropology in Oceania and the past president of the American Anthropological Association Environment and Society section. In 2017 her most recent book, “Dispossession and the Environment” won the Columbia University Press Distinguished Book Award. In addition to her academic work, Dr. West is the co-founder, and a board member, of the PNG Institute of Biological Research, a small NGO dedicated to building academic opportunities for research in Papua New Guinea by Papua New Guineans. You can learn more about her on her website here.

Since 1997, John Aini and Paige West have been working together to help understand the links between biological diversity and cultural practice and to help the people of New Ireland Province work to conserve both their natural resources and their valued cultural traditions. In 2010, they co-founded the Roviana Solwara Skul, a school in Papua New Guinea dedicated to teaching at the nexus of indigenous knowledge and western scientific knowledge. 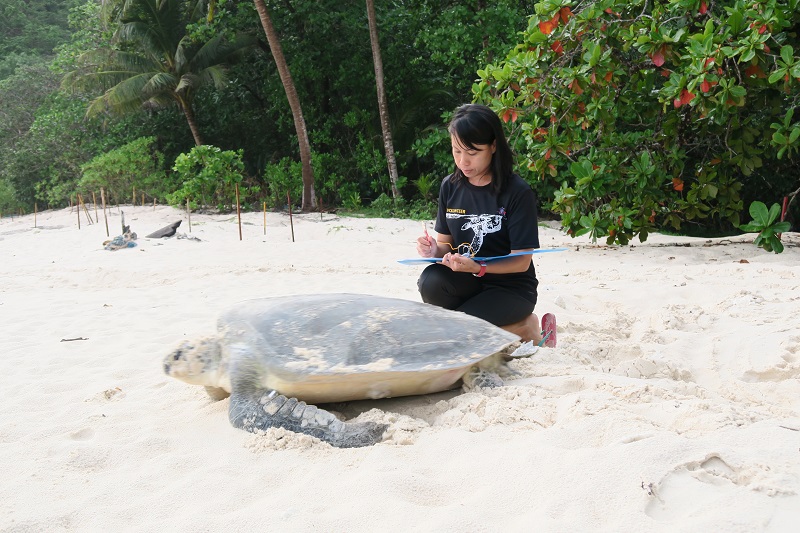 Dr. Juanita Joseph is one of the leading sea turtle biologist and conservationist in Southeast Asia. She had been involved in sea turtle conservation since 1996. She obtained her M.Sc. from University Putra Malaysia and Ph.D. from Royal Holloway University of London. Her research focused mainly on the nesting biology and molecular ecology of sea turtles. Dr. Joseph runs a sea turtle conservation at Redang Island (2009 – 2017), and organised many outreach programmes in Malaysia, such as the SEATRU Volunteer Programme. Working closely with the Department of Fisheries Malaysia and WWF-Malaysia, she hopes that one day the State Governments in Peninsula Malaysia will enact a legislation to ban the commercial sales of sea turtle eggs. Juanita is currently working with the Borneo Marine Research Institute of University Malaysia Sabah.  You can learn a little more about the amazing work Juanita has done here or here, and follow her on ResearchGate here!

To conserve the world’s oceans we must go beyond science, and use it to inform policy and management, and ultimately to catalyze change. The Society for Conservation Biology's International Marine Conservation Congress (IMCC) brings together conservation professionals and students to develop new and powerful tools to further marine conservation science and policy.