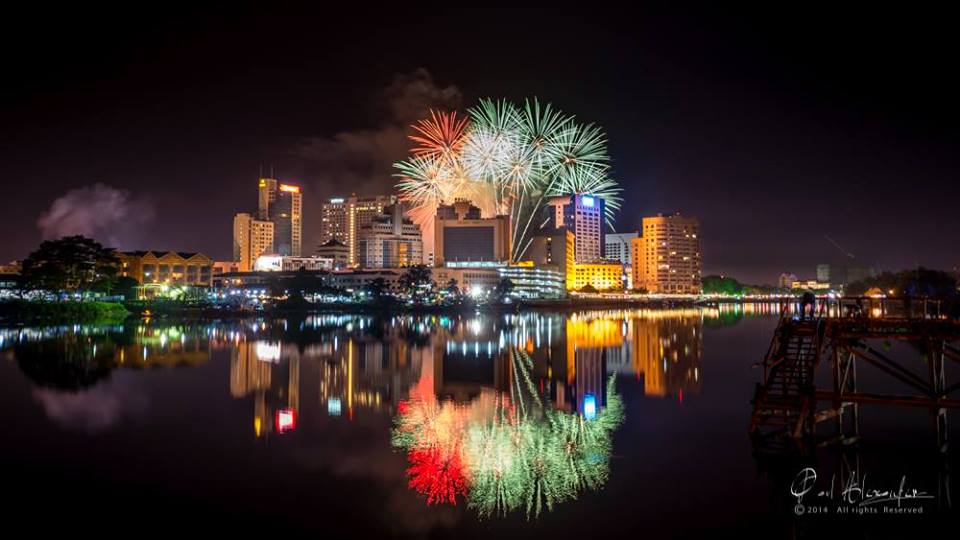 Kuching at night during a celebration 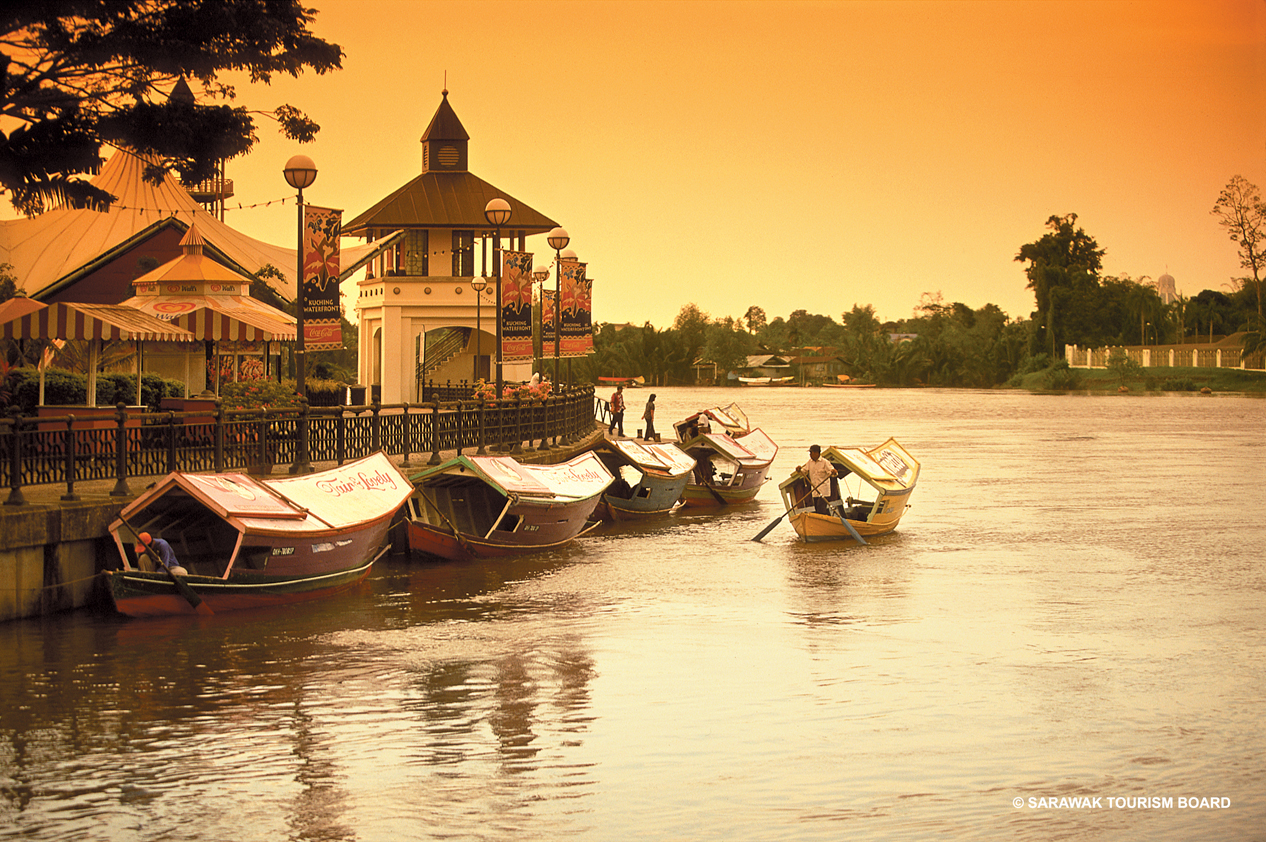 Sunset in Kuching along the waterfront 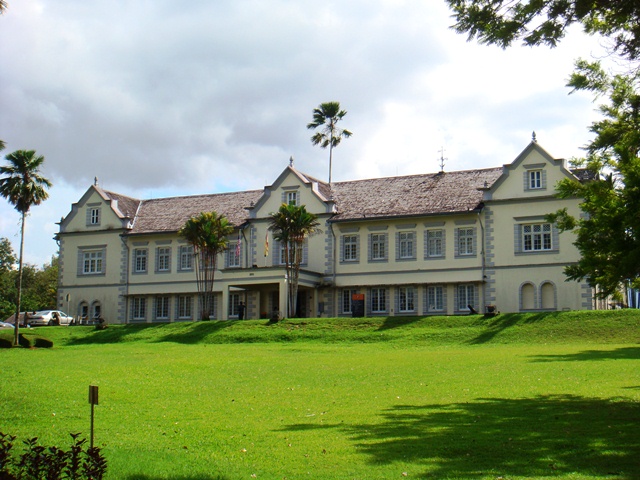 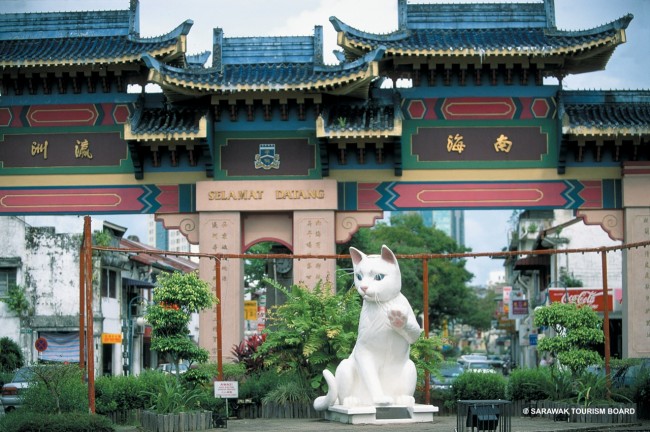 The entrance to Padungan Street, one of Kuching's two Chinatown areas 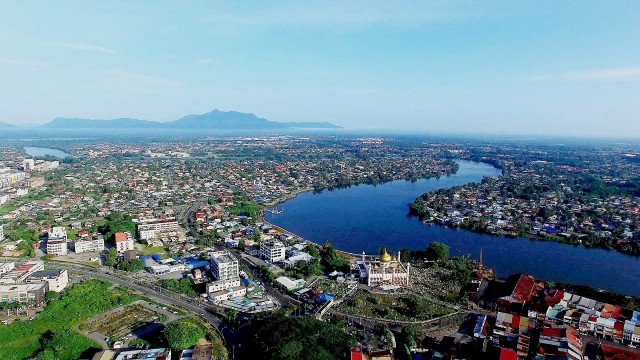 Kuching, the capital of Sarawak, is simply unique. No other city in Malaysia has such a romantic and unlikely history, nor displays its charms with such an easy grace.  The residents of Kuching (pop. 650,000 approx.) enjoy living here, and take great pride in their fascinating city, which is reflected in their attitude to visitors.  Kuching welcomes visitors warmly, but it does not put on an act for them.  Instead it goes about its own business in a relaxed manner that hasn’t changed in 160 years.  To make the most of your visit you must put on your walking shoes, take to the streets (and the water), and join in.

Like all towns and cities in Borneo, the focal point of Kuching and the reason for its existence is the river.  Hiring a sampan to meander slowly up and down the Sarawak River is the best way to get your first impression of Kuching. From the river you will see picturesque Malay villages (kampungs), a golden-domed mosque, a Victorian fort, a whole street of 19th century Chinese shophouses and an imposing wooden-roofed palace, all set against a background of distant mountains.

Kuching’s city centre is well preserved and very compact; virtually everything that is worth seeing can be reached on foot or by sampan. The narrow, bustling streets are crammed with shops selling all manner of goods, from the mundane to the exotic. There are ornate Chinese temples, many fine examples of colonial-style architecture, a beautiful waterfront and a number of interesting museums, including the historic Sarawak Museum. There is an excellent range of accommodation, from luxury via boutique to budget, good restaurants, and nightlife to suit most tastes and pockets. You can try local delicacies such as deer meat and jungle fern, drink a glass or two of tuak (local rice wine), or feast on a vast array of seafood dishes Kuching has an unusual name – the word means “cat” in Malay. There are a number of stories as to how this name came about, but it is unlikely that it has anything to do with cats. The two more likely explanations are that it derives from the Chinese word kochin, meaning “harbour,” or that it is named after the mata kuching or “cat’s eye” fruit, a close relative of the lychee that grows widely here.

Sarawak is a unique and enjoyable tourism destination, and Kuching is the ideal base from which to go exploring. The nearby national parks include the famous Bako, home of the rare proboscis monkey, Gunung Gading, where giant rafflesia flowers bloom, Kuching Wetlands, which protects a fascinating mangrove ecosystem, Kubah, with its rare palms and orchids, and Semenggoh and Matang Wildlife Centres with their resident orangutans. Literally hundreds of Iban and Bidayuh longhouses are within easy travelling distance. Damai, on the nearby Santubong Peninsula is Sarawak’s main resort area, and many travel agents offer “two-centre” packages allowing you to explore Kuching, go on a longhouse trip, visit Bako and the rainforest and then relax on the beach after the rigours of jungle trekking.

Kuching is also the ideal base for visiting longhouses. Local travel agents have a variety of tours, ranging from half-day trips to nearby Bidayuh longhouses, to week long safaris to Iban longhouses on the Skrang, Lemanak and Batang Ai river systems.

To conserve the world’s oceans we must go beyond science, and use it to inform policy and management, and ultimately to catalyze change. The Society for Conservation Biology's International Marine Conservation Congress (IMCC) brings together conservation professionals and students to develop new and powerful tools to further marine conservation science and policy.