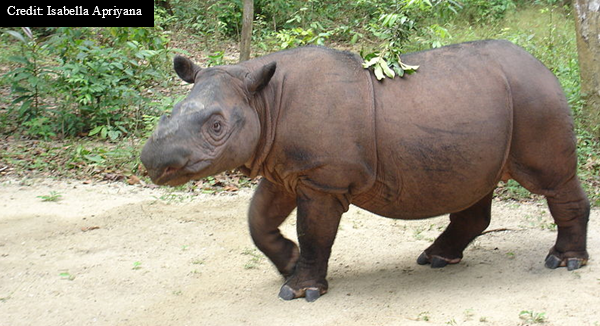 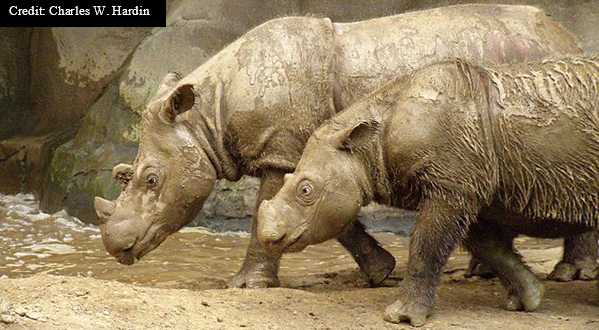 Rhinos wallow in mud holes to keep cool and protect them from insects. 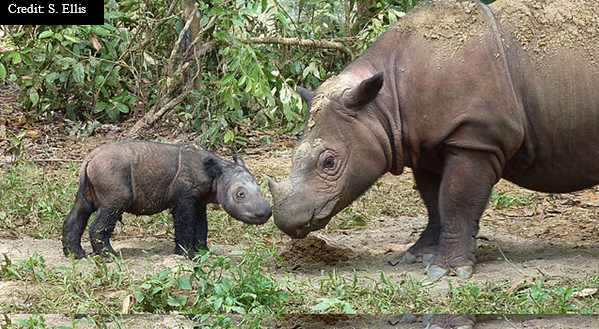 Critically Endangered, there are less than 100 Asian Two-horned Rhinos left.

The Asian Two-horned Rhinoceros ​(Dicerorhinus sumatrensis), also known as the Sumatran Rhinocerous, is considered Critically Endangered due to habitat loss and poachers who sell various body parts that have alleged (but unlikely) medicinal applications.  Its current range has been reduced to a few isolated populations in Sumatra and Borneo.  Studies in the wild have shown that these wide-ranging rhinos feed on over 100 species of plants, and change their diet when feeding in different parts of their range. This indicates that they can be linked to a wide diversity of other species. Their survival is dependent on significant conservation action that includes effective protected area management, anti-poaching efforts, broad public support for their restoration, and research that can be applied to their conservation in the field.

The Asian Two-horned Rhinoceros in the News:​

Conservation beyond Boundaries: Connecting Biodiversity with Communities, Governments and Stakeholders

The theme of ICCB 2019 recognizes the challenges of conserving biodiversity across political and cultural boundaries. Biodiversity does not recognize human-drawn boundaries, but the latter can have major impacts on the biosphere through social, political and economic structures. Conserving biodiversity beyond boundaries requires communication and collaboration between countries, government agencies and NGOs, and communities, and across fields of knowledge. Threats to species and ecosystems, such as commercial wildlife trade, infrastructure, and expansion of the human footprint reach beyond boundaries. To achieve targets for sustainable development, conservation solutions must be achieved through collaboration, dialogue and decision-making at local, regional and global scales.