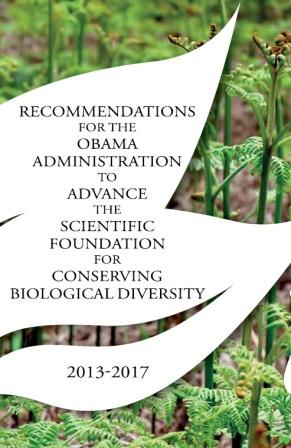 April 22, 2013.  Today, SCB released a set of recommendations to the Obama Administration, which outlined a series of steps that agencies throughout the Federal government can take in the next four years that would strengthen the scientific foundation for conserving biological diversity.  The recommendations in this report focus primarily on steps that the President and the various Federal agencies can take now, under existing law, to protect, conserve, and restore biological diversity.

In the report, SCB urges the administration to elevate climate change to a top priority by acting aggressively to regulate greenhouse gas emissions and to enact new policies and regulations regarding the management of public lands that would increase the amount of carbon those lands can sequester.  The report outlines additional steps that can be taken to improve the implementation of our core environmental laws such as the Endangered Species Act and the National Environmental Quality Act.  The report suggests improvements in the policies adopted in the first Obama term in order to fulfill the vision set out in the President’s Memorandum on Scientific Integrity—to protect scientists from political interference and to more effectively ensure that the scientific process will guide the development of policies that affect biological diversity.  Finally, SCB outlines additional actions that can be taken in the international arena to address not only climate change, but other substantial threats to biodiversity such as illegal trade in endangered species.