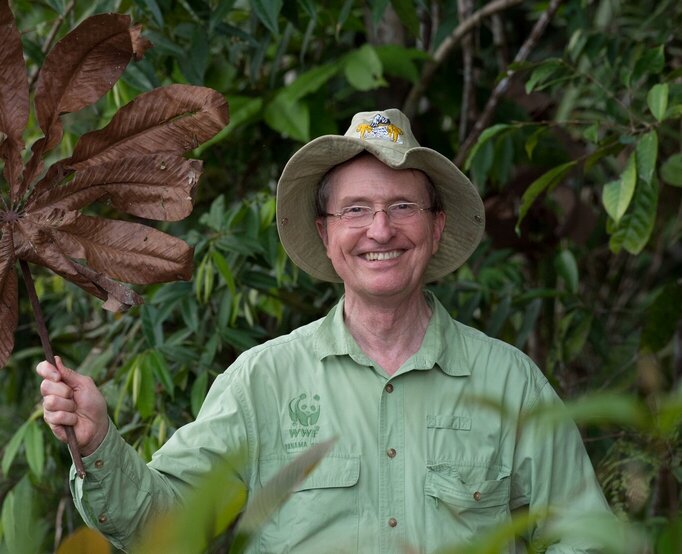 I'm devastated by the loss of my PhD advisor, Tom Lovejoy.

Tom was one of a kind. He was the magical blend of accomplished scientist, diplomat, and policy-influencer AND was the most generous, kind mentor one could ever hope for. Much has been written about his professional accomplishments - of which there were many. Not only did he coin the term "biological diversity," but he also put Amazonian conservation on the international stage, pioneered the concept of debt-for-nature-swaps, and established the world's longest running ecological field experiment that paved the way for the field of conservation biology and policy actions to preserve the living world. All of us in conservation stand on his shoulders.

But most of all, Tom was a kind and generous person. This, more than anything, was what made him and his work so influential. I’d like to share just a few attributes Tom embodied that made him so special as a person and so effective as a conservationist. We can all learn from his enduring legacy that conservation is not only about what we do, but how we do it.

Tom was steadfastly dedicated to his students. He never hesitated to help us, despite his very busy schedule - with competing demands like serving as Science Envoy for President Obama or chairing board meetings for the many boards he sat on, among many other important demands.

Tom loved bringing people together. He taught his course "The Challenge of Biodiversity" each spring, which involved introducing his students to his research and hosting amazing guest lecturers - followed by a happy hour! He invited advisees to his home - Drover's Rest - at the end of each semester and always served up a very enjoyable time. The house was full of fascinating collections from his travels, and we sensed how powerful it was in convening important groups of people. Convening was one of Tom's superpowers. He could bring people together and make conservation magic happen.

Tom knew everyone and was generous with his connections. He often described luminaries and celebrities as his friends, and we were often starstruck! What's more, he was always willing to connect his students to other experts in the field if he thought they could help us with our research or its application.

Tom was humble. He was always winning awards, and when we'd congratulate him, he'd shrug it off. He didn't really care about that kind of thing. He cared much more about other people, relationships, and saving the world's biodiversity.

Tom was all about making a difference. He often shared with his advisees that the goal of his work was to make the most difference that he could each day.

Tom was authentic. He once told me that he was criticized for not speaking forcefully enough when interviewing on the topic of biodiversity loss and conservation. He responded plainly that he spoke in his natural voice, and that was as good as anything. I learned from this about the power of being true to oneself in a world that attempts to force conformity to certain expectations.

Tom was an optimist and ever-persistent. He believed that optimism serves a purpose in our work in conservation, helping us to keep going despite the many challenges. Tom worked nearly up to the very end of his life. He was always striving to do something - write, influence, collaborate, convene. Even in the most difficult circumstances, he saw opportunities.

Tom dared us to be our best selves and always strive to make a difference. With a wink and in the spirit of John Lewis, Tom often told us to "make good trouble" with our science and its application. These words will continue to inspire courage in my research and its communication.

Overall, Tom's impact on the world of conservation science, policy, and advocacy is enormous. If I could sum up what I've learned from Tom: Tom taught me that conservation success hinges on combining rigorous evidence, ethics, and communication, along with solid relationships to make real change happen.

Tom, thank you for everything. We will carry your legacy forward.