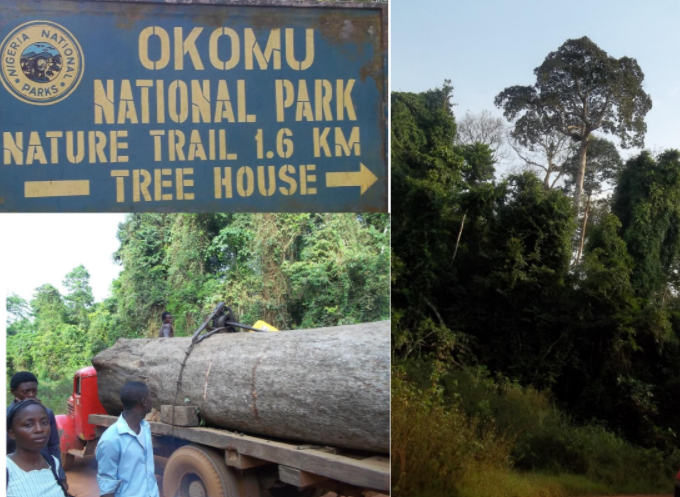 Read the PDF with signatures here.

Background to the problem
Protected areas (PA) around the world face challenges and this is even more so in the global south where resources are lacking, natural resources governance is weak, and PA officials have limited capacity. The Okomu National Park (ONP), in southwestern Nigeria, was originally established as a forest reserve in 1912 and covers a total land area of 181 km2. It was designated a national park in 1999 with the original aim of conserving two species, the forest elephants (Loxodonta africana cylotis) now listed as Critically Endangered in the International Union for the Conservation of Nature Red List and the white-throated monkey (Cercopithecus erythrogaster pocoki) listed as Endangered[1,2]. Other wildlife species of global importance found in the park include the African buffalo (Syncerus caffer nanus), chimpanzees (Pan troglodytes), the red-capped mangabey (Cercocebus torquatus), mona monkey (Cercopithecus mona), and putty-nosed monkey (C. nictitans ludio), as well as three species of antelope: Maxwell duiker (Cephalophus maxwelli), yellow-backed duiker (Cephalophus silvicultor), and red-flanked duiker (Cephalophus rufilatus), and a species of mongoose (Herpestes sp.). Others are the civet cat (Viverra civetta), the red river hog (Patamochoerus porcus), dwarf crocodiles (Osteolamus tetrapis), warthog (Phocochoerus aethipicus), and tree pangolin (Phataginus tricuspis) [1]. Further, about 150 species of birds have been identified in ONP, including the African grey parrot (Psittacus erithacus), and the African grey hornbill (Tockus nasutus) [1]. Some of the key trees found in the park are the Ceiba petandra, Celtis zenkeri, Triplochiton scleroxylon, Antiaris toxicaria and Pycnanthus angolensis[1]. ONP is the last stronghold for these species and plays a vital role in their survival. The national park is situated between latitudes 6°15’ and 6°25’ N and longitudes 5°9’ and 5°23’ E and is about 60 km north-west of Benin City, southwestern Nigeria.

In recent times, alarming levels of logging have occurred in ONP[3]. Similarly, in 2011, conservationists raised an alarm over illegal logging in the park[4]. This persisting and escalating destruction of the last vestiges of rainforests in ONP calls for urgent action. Without this, we will be losing, in a short space of time, one of Nigeria’s critical sites for biodiversity and the country’s insurance against climate change in the region. ONP is an important part of the Guinean forests of West Africa biodiversity hotspot[5].

Importantly, the Edo State governor Mr Godwin Obaseki has recently committed, in response to this crisis, to collaborate with the Federal Government to manage ONP, revitalise the park and strengthen security in the region[6]. However, this proposal will need to be informed by the best science available for sustainability and long-term impact.

Empirical studies have repeatedly demonstrated the ecological consequences associated with large-scale deforestation[7,8]. Given the mandate of the UN Decade on Ecosystem Restoration (2021-2030) “to prevent, halt and reverse the degradation of ecosystems on every continent and in every ocean”, Sustainable Development Goals (Goals, 12, 13 and 15), and the strategic priorities of the Society for Conservation Biology (SCB), we take the following positions:

1. The ONP represents one of the most important sites of biodiversity in Nigeria and globally. Losing this vital PA would be tantamount to retrogressing on all our national and international commitments to biodiversity conservation including meeting our National Determined Contributions of the Paris Agreement to address climate change and the Convention on Biological Diversity.

2. That this problem is due to both internal and external factors. Internal, as relates to management problems, corruption, and lack of basic amenities and equipment to enforce protection laws; and external, due to meagre budget allocation and low priority by the government[1] .

3. That the situation can be reversed if the government, civil society, and private institutions consolidate efforts to intervene on the problems in ONP, and indeed all Nigerian national parks.

The following recommendations based on the peer-reviewed literature are provided to address current challenges in ONP:

1. While funding should be provided to augment equipment and infrastructure, these may fail to improve enforcement and not lead to positive conservation outcomes if not followed by resolution of land tenure, clarity in user rights, enhanced patrolling strategies and protection of rangers from risks of retaliation[9] .

2. Consecutive steps within the enforcement regime such as detection, arrest, persecution, and conviction must not allow any weaknesses to lie in any of these steps to prevent undermining the effectiveness of enforcement. For example, if these sanctioning steps are poor, just increasing efforts may not be enough to heighten deterrence[9] .

3. Park officials should endeavour to make the timing and location of their patrols unpredictable to increase the detection probabilities for illegal activities such as logging and hunting[9] .

4. Funding should be channeled from government, civil society, private institutions, and the international community to increase the budget allocation for managing ONP including increasing the wages of rangers who are at the frontlines of conservation.

5. Park officials should increase investment in co-management efforts with local communities surrounding ONP to facilitate information sharing and cooperation in controlling logging in the park.

Endorsed and Signed by