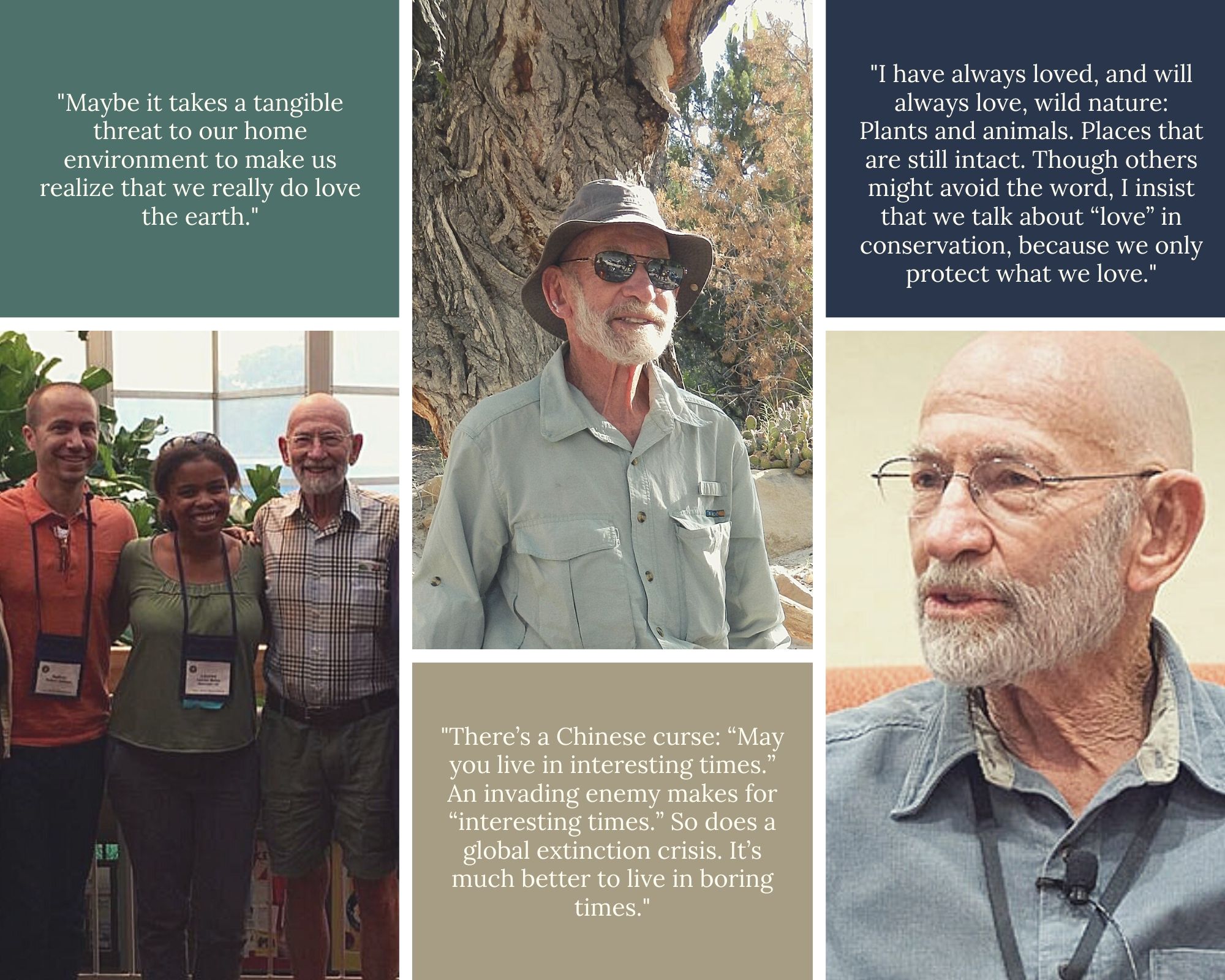 Quotes from We Only Protect What We Love. Photos, left to right: 1. Michael Soulé at NACCB 2014. 2. Photo credit: Wldlands Network.

Michael Soulé, famed and revered in conservation circles though not well enough known outside of them, was, in his quiet way, one of the great spiritual and intellectual leaders of the late 20th and early 21st centuries. If you cared about the existence of biological diversity on planet Earth, as you should, he was a lodestar.

As a teacher, as a researcher, as a theoretician, as a colleague, and as a leader, he influenced the field of study and activism known as Conservation Biology probably more than any other single person. Serving as the founding president of the Society for Conservation Biology was only a reflection, not an apogee, of his contributions. Among other achievements, he was co-author or editor of five landmark books: Conservation Biology: An Evolutionary-Ecological Perspective (Soulé and Wilcox, eds. 1980), Conservation and Evolution (Frankel and Soulé 1981), Conservation Biology: The Science of Scarcity and Diversity (Soulé ed. 1986), Viable Populations for Conservation (Soulé ed. 1987), and Continental Conservation (Soulé and Terborgh eds. 1999). These works, plus his willingness to step up into the realm of persuasion and application, bringing nonscientists into the struggle to conserve Earth’s biological diversity—through efforts such as the Wildlands Project—made him a uniquely heroic figure. Whether you cared about lizards of the California chaparral, mountain gorillas of Rwanda, rare orchids of the Andean highlands, or carnivores anywhere he was your paladin.

Yet, at the same time, what a kind and wise and charming man. I first went to interview him in the late 1980s, when to me he was an august figure, but one who greeted me gently at his office at UC Santa Cruz, with a bicycle parked in the corner, eating a cardboard cup of dried soup for his austere lunch as we talked. Later I had more relaxed opportunities to enjoy his company and ponder his thoughts, including a shared river trip along the Missouri River downstream from Fort Benton, Montana, along with Dave Foreman, Michael Gilpin and their spouses, for languid days and whisky campfires, as well as dinners in Bozeman with my wife, Betsy Gaines, and at his house in Paonia, Colorado, when he put me up like a visiting nephew. Those hours were brief gifts. I barely knew him, but I was blessed with his friendship, as many were, and I venerate—yes, present tense, I continue to venerate, as though he’s among us still—his sharp mind and his gentle heart, equaled by few others I’ve encountered on this planet.

DAVID QUAMMEN, Author of Spillover, Ebola, The Reluctant Mr. Darwin and Song of the Dodo (a must read for all conservation biologists); and now working on a book about Covid-19.