River Otters Lurking in the Sea: Further Evidence of a Paradigm Shift in Conservation

Several centuries of overhunting coinciding with rapid human population growth have led to the demise of many predators at the top food webs. Through the loss of top predators, the scientific community has little understanding of what food webs looked like in the past. However, there is a silver lining as recent research has recognized that the loss of top predators comes with a heavy cost, as some top predator populations can control food-webs by keeping other consumers in check and stabilizing whole ecosystems.

In the United States, legislation such as the Endangered Species Act and Marine Mammal Protection Act, has helped protect vulnerable species from the risk of extinction by establishing laws to protect them and their habitats. The return of these animals, especially top predators, to their former ecosystems will require us to rethink the underlying theory of what are their “natural” habitats. For example, we are finding that sea otters can be successful outside of their well-known kelp forest habitats, by using tidal salt marshes for food, rest, and pupping. Alligators were once thought to lack the ability to process excessive salt and therefore avoid marine environments, however, we are finding that not only do alligators use marine environments but they can successfully hunt crabs and sharks. These recolonization events also present a challenge to conservation, as managers adapt to changing food webs (see articles on our recent research here, here, and here).

One species that has benefitted from conservation efforts over the last century is the North American river otter (Lontra canadensis). Like many animals prized for their pelts, the river otter was under threat from overhunting, and by the early 19th century it was at risk for extinction. However, primarily local-scale conservation measures and stricter water quality and pollution standards have allowed the river otter to rebound, and it now inhabits most of North America. River otters are semi-aquatic mustelids (the weasel family), and are traditionally thought to be freshwater animals. However, across both coasts of North America, river otters are expanding into coastal environments. Certain populations along the west coast rely entirely on marine food sources because they do not live within proximity to major freshwater sources.

From a conservation perspective, river otters inhabiting marine ecosystems challenge old paradigms that are still prevalent in conservation practices. There are detailed efforts to conserve important habitats critical to the survival of the recovering river otters, but these efforts work within the idea that river otters are freshwater dwelling organisms that mainly occupy freshwater. The fact that there is a healthy and successful colony of river otters in a marine system such as the Salish Sea of San Juan Island is indicative of a paradigm shift that deserves our attention. Understanding the habitat expansion of river otters is crucial to developing the best conservation plans for a recovering top predator. 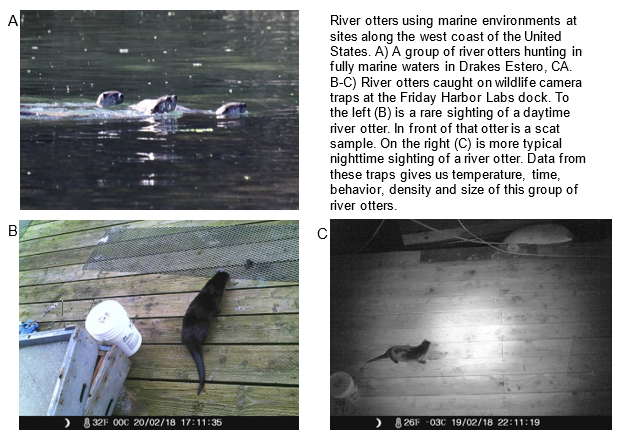 And just as we are scratching the surface to all these questions about this enigmatic creature, and other recovering top predators, the U.S. Congress and the Trump Administration are developing new proposals to strip away key components that make the ESA (see New York Times article) and MMPA (see The Hill article) work for these animals. How do we navigate endangered species recovery with an administration that values economics over conservation? It’s up to us, the conservation community, to figure out ways to continue learning about these charismatic creatures to better inform conservation and management before policy makers rush to decisions that would weaken hallmark laws for species protection.