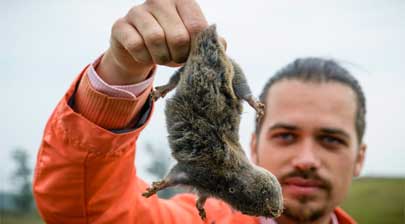 Dr. Attila Németh received the first European Early Career Conservation Award from the SCB Europe Section for his interdisciplinary research that led to the discovery of new endemic mammal species in Europe, for his work to increase public awareness of neglected species and for his pivotal role in the establishment of protected areas, and national legislation for their conservation in Hungary, Romania and Serbia.

Thanks to Attila Németh and his colleagues’ works, all the mole rat species in Hungary have been elevated to the highest protection rank in the updated species protection list.

Since the beginning of Attila’s research programme, a strong communication campaign was put in place with 25 educational articles, one educational book and two book chapters in educational books, more than 30 TV and radio interviews, and over 70 appearances in broadcasted educational programs. Thanks to this campaign mole rats went from totally unknown animals to familiar ones in Hungary.

Attila’s conservation impacts spans several countries in the Carpathian basins. Attila’s field work and phylogenetic analyses proved that the blind mole rats of the central Transylvanian Plateau, in Romania, are a distinct species, endemic of the region, now called Méhely’s blind mole rat (Spalax antiquus ) representing one of the greatest zoological values of this region. The international collaborations established by Attila to study mole rats in Hungary and Romania were instrumental in the creation in 2011 of an intergovernmental Hungarian–Romanian Joint Committee on the Environment, which set as one of its main priorities in setting the investigations of all blind mole-rat species occurring in the two countries.

Attila also discovered through phylogenetic analyses another species of lesser mole rat, now named Vojvodina Blind Mole Rat (Nannospalax montanosyrmiensis ), a species that can only be found in three localities in the whole world between Serbia and Hungary and that should be considered critically endangered. The discovery of this species and the discovery through Attila's field-work of a population at the border between the country were pivotal in the establishment of a trans-boundary protected area system across Hungary and Serbia.

Attila's achievements were acknowledged by the SCB Europe Section with the first European Early Career Conservation Award, and he will give a guest-keynote talk upon receiving his prize at the Student Conference on Conservation Science in Tihany, Lake Balaton on August 31st.