A Leaf Out of My Album 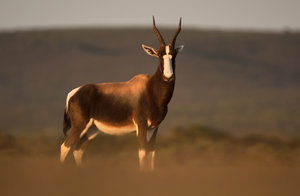 The bontebok (Damaliscus pygargus) is a South African-endemic antelope that was hunted to the brink of extinction in the late 1800s. With just a few individuals remaining, it was once among the rare antelopes of the world. Thanks to conservation efforts in the 1930s, the species survived and today can only be found in protected reserves in South Africa. Since the bontebok is closely associated with a type of vegetation called coastal fynbos that is found only in the Cape region, these reserves are all situated in the Western Cape of South Africa.

One such reserve, De Hoop Nature Reserve, has been crucial to the survival of this charismatic antelope. Aptly translated in English as “The Hope”, De Hoop lies at the southernmost tip of Africa and is 34,000 hectares of pristine fynbos, beaches, sand dunes, wetlands and mountains. This World Heritage Site is home to the world’s smallest and most threatened plant kingdoms – the Cape Floral Kingdom, on which bontebok and many other species subsist.

It was within this beautiful setting close to sunset that I was walking with my camera, when I saw a distinctive chocolate brown, white-nosed and white-backed medium sized antelope in the distance – there was no mistaking: it was a bontebok! I quietly crept forward hoping not to scare the animal off, and when I got close enough, lay on my belly on the ground to gain a low perspective. I commando crawled even closer and finally got my shot just as the animal turned to look at me.