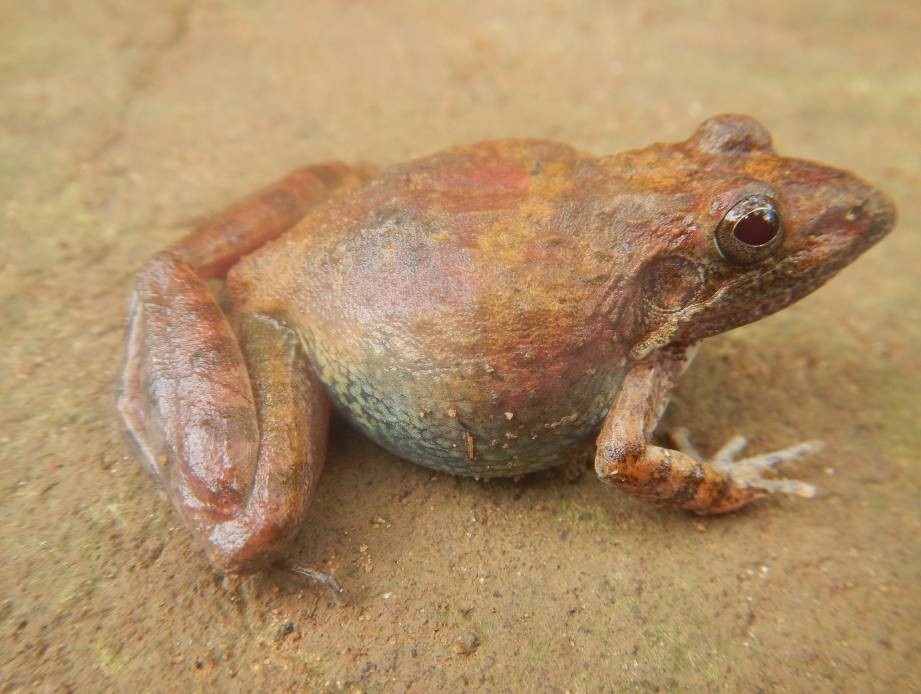 The Fouta Djalon highlands are one of the most impressive natural landscapes spread over 80,000 km² in central-northern Guinea. These highlands rise to 1,600 msl and are characterized by flat-topped mountains, sandstone, dolerite and soils rich in minerals (Morton, 1986). Besides these geological features, the region is renowned for its fascinating waterfalls, deep valleys with fast flowing streams, and as the source of major rivers such as the Senegal and Gambia that irrigate savannah formations and forest islands far downstream. Hence, the region’s forests and freshwater habitats supply important ecosystem services in addition to the rare and endemic species of plants and animals that are found there, especially amphibians. (Hillers et al., 2008).

In June 2018, a herpetological survey of five days near Labé, in the Fouta Djalon region, enabled us to record numerous endemic and sub-endemic anurans, among which Ptychadena retropunctata, a rare and poorly known frog. The species is commonly recognized under the name of Cameroon grassland frog, but previously not recorded in Central Africa. The frog was originally described from Mount Nimba, in south-eastern Guinea (Angel, 1949). Further records were published from the Boké region in north-eastern Guinea (Hillers et al., 2006) and the Loma mountains in north-eastern Sierra Leone (Lamotte, 1971). Also, reported from Kedougou, in south-eastern Senegal (Monasterio et al., 2016). All records thus far restricted to the western part of the Upper Guinea biodiversity hotspot of West Africa.

We photographed the frog, measured its snout-urostyle length with a dial caliper, and thereafter released it at its site of capture. The female frog had a compact body with a pointed snout. Its snout-urostyle length reached 48 mm. Its hind legs were comparatively stronger and longer than forelegs. The dorsum of this animal was feebly granulated. Some more or less dark transverse bands were present on its fore and hind legs. The tympanum was characterized by an external cavity equal to diameter of the eye. The dorsum was rust-coloured while the venter was whitish.

This became the first record of Ptychadena retropunctata from the Fouta Djalon highlands. A preliminary assessment of the amphibians from the Nialama Classified Forest, Touri Dam and Saala waterfalls, all within this area, had failed to detect the species in the last decade (Hillers et al., 2008). Notably, the species is still listed as data deficient (DD) on the International Union for the Conservation of Nature (IUCN) Red List.

This new record for the species and suggests that it may be widespread in the Fouta Djalon, and an in-depth study later in the wet season, focusing on population sizes, calls and microhabitat preferences of this frog could be useful and assist with the protection of its habitat. Specifically, the protection of the Saala waterfalls and adjacent forests is a dire need to end the exploitative activities in this area which could otherwise devastate a crucial ecosystem of national and regional interest.

We are very grateful to the villagers of Pellel Koura for hosting us, help with the survey and for their keen interest in their forests and wildlife. We are indebted to support from the COMBO project funded by the Agence Française de Développement, the Fonds Français pour l’Environnement Mondial, the Mava Foundation, and from Biotope’s Foundation. We thank Catherine André, Biotope and Guinée Ecologie for the survey logistics.

Jean Cassaigne is a herpetologist at Biotope, France.