Back from the Brink-- The Sahelo-Saharan Antelopes 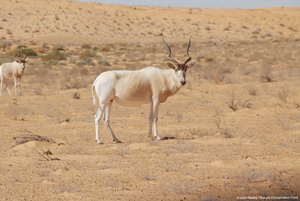 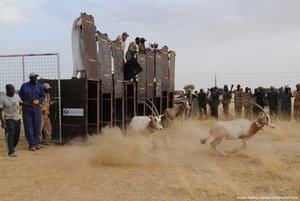 The Saharan desert and its Sahelian fringes cover over 10 million km², roughly a third of the landmass of Africa. This vast region is shared by at least 14 countries and is home to millions.  Yet the Sahara is not just miles and miles of endless sand but a complex mosaic of landscapes, including some of the biggest grasslands and highest mountain ranges in Africa.

The Sahara Conservation Fund (SCF) aims to conserve the wildlife, habitats, and other natural resources of the Sahara and its bordering Sahelian grasslands. The singular biodiversity of this region maintains the health and productivity of the grasslands; the germination and dispersal of plants is crucial to prevent desertification and habitat loss. The antelopes that live in them are part and parcel of this ecosystem. In the Sahara, there are two species of antelope: the addax and the scimitar-horned oryx.

Addax and scimitar-horned oryx are the largest desert antelopes and formerly inhabited large areas of the Sahara and Sahel. Both species were once common in the region but have suffered catastrophic declines due to excessive hunting, habitat loss and periodic drought. As a result, the scimitar-horned oryx is now extinct in the wild and the addax critically endangered, with only small populations remaining in Chad and Niger.

The addax (Addax nasomaculatus) is a relatively short-legged, stocky antelope (95-105 kg) with long corkscrew horns. It is a highly adapted desert-dweller. It is a nomadic species, exploiting ephemeral annual pastures and more permanent perennial grazing, with movements out of the desert during periods of drought or during hot season in search of shade and grazing.

Addax inhabit sandy desert with dune fields and firmer sand sheets. It shows a strong seasonal association with areas of perennial desert pastures composed of tussock grasses (Stipagrostis spp.) and succulent thorn scrub (Cornulaca). Its distribution is currently restricted to a narrow band of desert between eastern Niger and western Chad, with possible vagrants from Niger to southern Algeria. The situation remains unknown in former strongholds in Mauritania.

A survey carried out by SCF shows there are probably less than 300 Addax still living in the wild. The last major population of around 200 addax lives in the Tin Touma desert of eastern Niger.

The scimitar-horned oryx (Oryx dammah - Cretzschmar, 1826) is a large antelope (130-180 kg) with long, backward-sweeping, curved horns. Like other desert ungulates, it satisfies water requirements through the food it eats, will drink when water is available, and often migrates far in search of fresh rainfall and green pasture.

The scimitar-horned oryx is an inhabitant of Sahelian grasslands and sparse Acacia woodlands. It is not a true desert species, but it will penetrate suitable sub-desert habitats if pasture is available during the wet and cool seasons, grazing wide variety of grasses (Panicum, Aristida, Brachiaria, Chloris) and many leguminous herbs, with a strong affection for wild melons of the genus Citrullus because of high water content.

The former distribution of the scimitar-horned oryx is a broad band of suitable habitat across all Sahelo-Saharan countries from Morocco in the west to the Nile Valley in the east. The last strongholds are in central Niger (Termit) and central Chad (Batha, Ouadi Rimé-Ouadi Achim).

The scimitar-horned oryx is extinct in the wild. Last animals were observed in eastern Niger and central Chad (1980s). Several thousand of animals lived in Chad and Niger up until late 1970s. Civil war in Chad, and drought and poaching in Niger were major causes for its final decline. It is well represented in zoos and private collections, although the founder stock is limited mostly to several dozen animals captured in Chad in the 1960s. But were it not for zoos and private collections, the scimitar-horned oryx would be totally extinct today.

Since the mid-1980s, efforts to restore the oryx to the wild were carried out in a few countries, including Senegal, Morocco and Tunisia. Releases of captive bred scimitar-horned oryx and addax were undertaken in several fenced reserves in Tunisia between the 1980s and early 2000s.

The collaboration between Tunisia’s Direction Générale de Forêts (DGF), the North American Species Survival Plan and the European Endangered Species Programme also contributed to the broader Convention on Migratory Species (CMS) Action Plan for Sahelo-Saharan Antelopes and brought together many participating organizations and donors in a truly international effort for conservation. To prepare for eventual releases into the wild, SCF joined forces as well.

SCF then spearheaded international efforts to develop a global strategy for the restoration of the oryx and together with many stakeholders developed a suite of tools for the selection of suitable conservation sites and the establishment of criteria critical for successful outcomes.

After feasibility studies were carried out by the Environment Agency of Abu Dhabi (EAD), SCF and the Zoological Society of London (ZSL) in 2013, it was decided to focus the project on Chad’s Ouadi Rimé-Ouadi Achim Game Reserve, a vast protected area set up in the 1960s specifically for the conservation of oryx and other desert species. This 77,360 km² protected area is one of the largest in the world.

With the signing of project agreements between EAD and the Government of Chad, and EAD and SCF in 2014, work began on building a basecamp and pre-release pens in the reserve, and the selection of oryx from the nascent World Herd in Abu Dhabi for transport to Chad. ZSL, but also our other partners the Smithsonian Conservation Biology Institute, the Royal Zoological Society of Scotland, Marwell Wildlife, and Fossil Rim Wildlife Center provide further technical support for wildlife monitoring, oryx genetics and animal husbandry.

Today, following a recent release of 75 antelopes, there are more than 150 oryx living in the wild in Chad. The first critical target of the project is to have around 500 animals living unaided in the wild. In the longer term, we hope the oryx will be removed from the Extinct-in-the-Wild category.

In April 2017, SCF participated in a workshop in N’Djaména, Chad, to develop a 2017-2022 regional action plan to protect key populations of addax in Chad and Niger. The plan aims to use coordinated trans-boundary actions to improve knowledge and protection and where appropriate use reinforcement and reintroduction to increase population size and connectivity in natural range. The dama gazelle (Nanger dama), also a critically endangered species living in the area, is also covered in this plan.