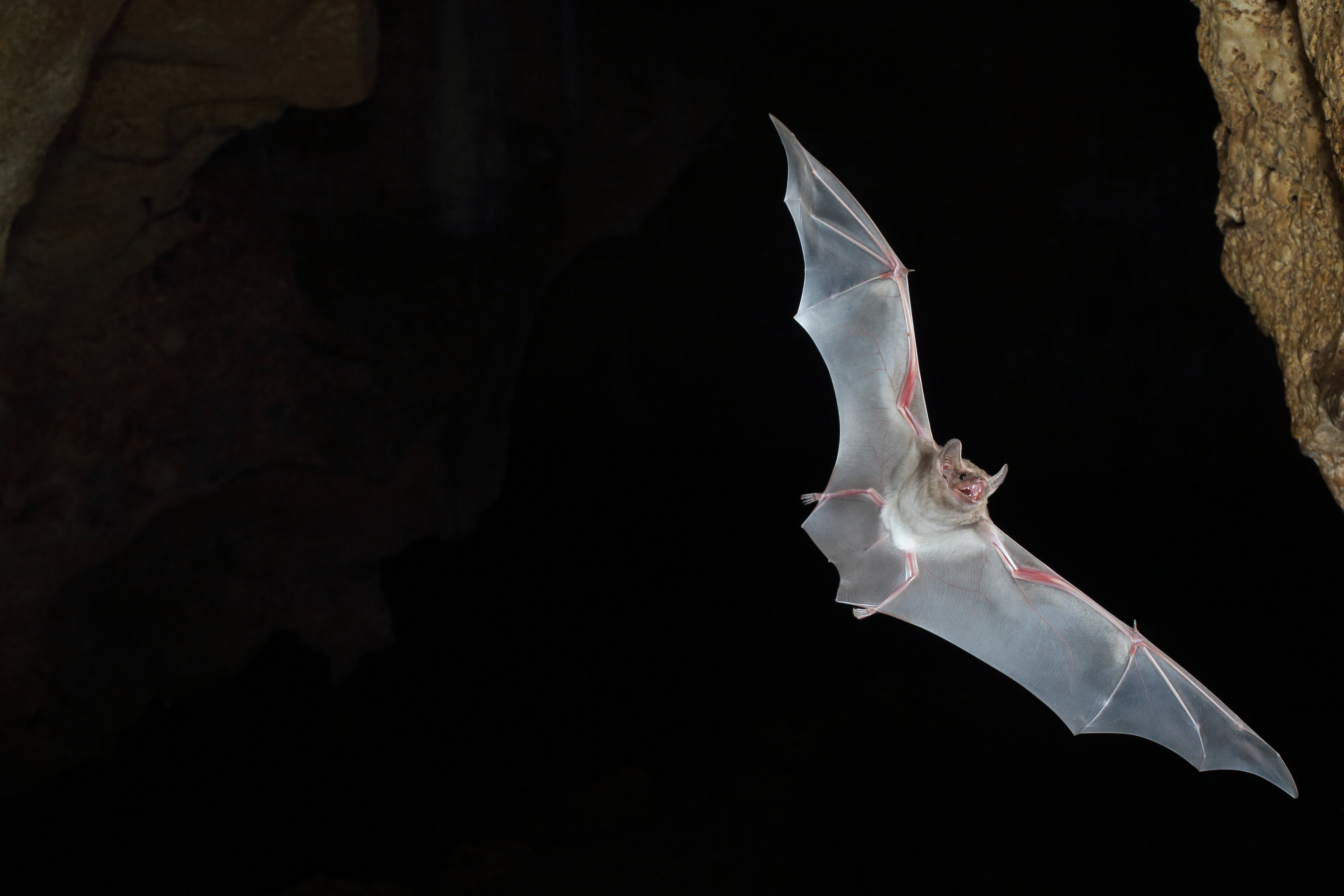 Bats live their lives concealed by darkness, and this is their principal protection against predation and disturbance. Darkness is particularly critical at the roosts, where many bats congregate and reproduce (Voigt et al. 2018).  An increase in artificial light is a serious consequence of rapid urbanization the worldover (Russo and Ancilotto 2015) and exposes bats and other nocturnal animals to threats which could endanger their survival (Hölker et al. 2010, Rowse et al. 2016).

The seafront town of Shimoni, some 70 km south of Mombasa at the Kenyan south coast, has grown exponentially in recent times due to a tourism boom, mainly due to the Shimoni slave-cave. A historical monument under the aegis of the National Museums of Kenya, this cave is also home to thousands of bats of different species. Shimoni housed slave holding pens in the late 16th century and tourists are taken on guided cave tours to learn about African history and the importance of bats as well.

The slave-cave is known to bat enthusiasts and researchers worldwide, because several important and pioneering studies were made there in the past (e.g. Pye 1972, McWilliam 1982) as well as more recently (e.g. Webala et al. 2019). Bat research led by the Mammalogy section of the National Museums of Kenya still goes on in the cave and will hopefully continue.

At least six bat species roost in the cave at present - giant leaf-nosed bat (Macronycteris gigas), striped leaf-nosed bat (Macronycteris vittata), Lander's horseshoe bat (Rhinolophus landeri), Geoffroy's horseshoe bat (Rhinolophus clivosus), Hildegarde's tomb bat (Taphozous hildegardeae), heart-nosed bat (Cardioderma cor) – and a few more have been there in the past, including the African sheath-tailed bat (Coleura afra), and Sundevall's leaf-nosed bat (Hipposideros caffer). However, the Shimoni slave-cave is now (2019) under immediate threat from the recent installation of a strong LED streetlight just in front of the main cave opening by an international aid organization. The well-meant purpose of the installation was to provide light along the main street of the village for safety, convenience and comfort of the public. 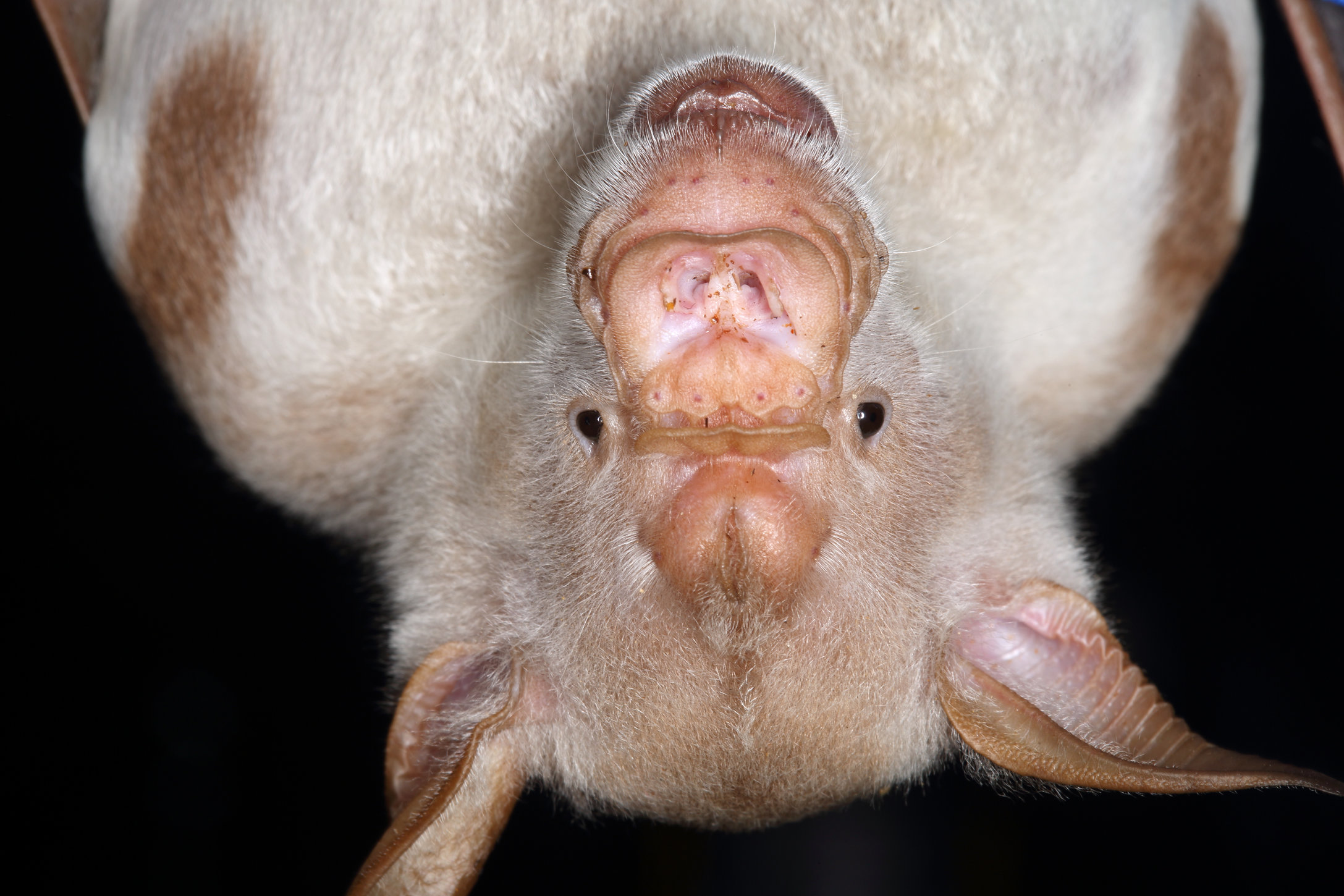 However, lights and bats don’t jell and strong lights in the wrong place, such as near a big bat roost, would be devastating (Rydell et al. 2017). In this case, surely the lights are detrimental to bats. However, this risk was not considered, simply because nobody thought of it. There was little or no consultation. The bats no longer emerge through the main cave opening because of the light from the lamp, which exposes them to predators waiting outside. Instead, they use a hole in the other (dark) end of the cave, but the hole is small and is increasingly being overgrown by vegetation, which will soon block the exit.

As far as we know, the Shimoni slave-cave is the only known locality in Kenya where the giant leaf-nosed bat is found, and perhaps the only place in the whole of Africa where it coexists with the sympatric striped leaf-nosed bat. Indeed, the two species form separate colonies just next to each other in the ceiling of the cave, and both can easily be watched from below. They have become rather tolerant to occasional groups of visitors in the cave over a long time and can be observed easily by anyone equipped with a torch or an ultrasound detector. Before the construction of the streetlight outside the entrance, this cave was a rare example where tourism and bat conservation have coexisted successfully over many years, thanks to careful management by the local staff and a total absence of permanent lights. Places like the Shimoni slave-cave are extremely important for conservation, because they provide opportunities where the public, locals and tourists alike, can experience spectacular bats and give them the attention they so badly need.

In hindsight, the problem with the new streetlight could easily have been avoided if local expertise were consulted. Nevertheless, we are working with the management to reduce the negative effect of the light, perhaps by moving the light post away from the cave opening or by redirecting or shielding the lamp. A permanent extra opening by cleaning the bushes in front of the exit holes currently used at the back of the cave is planned. It would a good idea to put up signage informing tourists about the bats and their sensitivity to light, so that torches or spotlights are not aimed directly at roosting bats. We also suggest that the cave is kept clean from plastic and other garbage, which signals neglect and poor management.

In conclusion, permanent lights should be avoided at bat colonies, particularly in and near bat cave entrances. Given that bats provide a host of ecosystem services as pollinators, seed dispersers and insect predators (Boyles et al. 2011, Srilopan et al. 2018), minimizing disturbances to bat caves and preserving their habitats are top priorities to conserve these ecological marvels of Africa.

We thank Sahid Chidzinga, Muhammed Parango and the staff of the Shimoni slave- cave for providing us access to the cave.