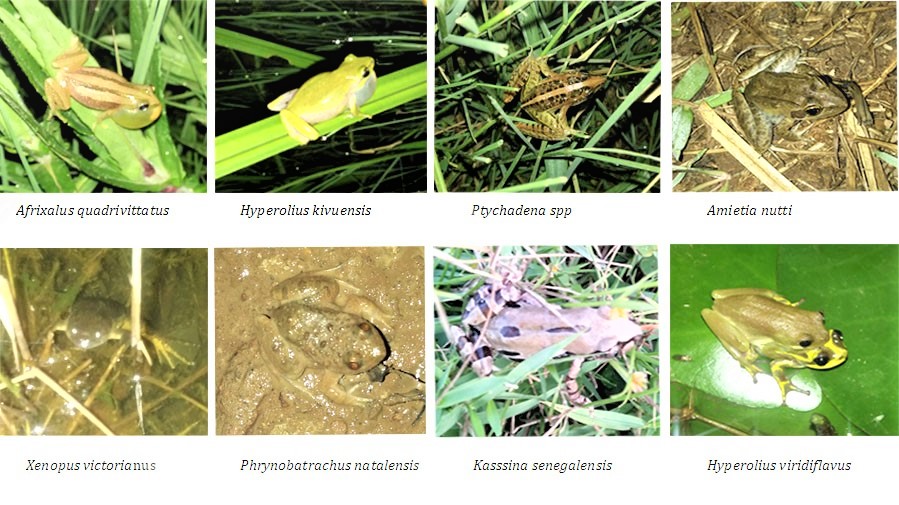 There have been several studies (Roelke 2010; Dehling & Sinsch, 2013; Sinsch et al., 2012; Lehr et al., 2015; Hölting et al., 2009; Roelke, 2010; Dehling, 2012) that substantiate the diversity and distribution of anuran in Rwanda. Anuran are useful indicators of wetland health when data are available for their distribution and habitat selection (Saber, Tito, & Said, 2017).  However, Rwandan anurans are still poorly studied (Dehling & Sinsch, 2013) and this lack of information on their taxonomy and distribution limits the ability to effectively manage and conserve wetlands in Rwanda.

Wetlands provide ecosystem services to people and serve as habitat for biological diversity that cannot survive elsewhere (Barbier, 1997). Boyer & Grue (1995) explained the importance of amphibians as bio-indicators of environmental quality. Yet they aren’t shown much love and empathy from the public due to their looks and hence, the world is oblivious to the steep global declines in amphibian populations (Stuart et al., 2004).

We aimed to identify the anuran species found in the Mugesera and Gitarama wetlands of Rwanda by bioacoustics.  A comparison of amphibian diversity in both natural and disturbed wetlands was also included. We carried out the study in October, November and December 2018 in the Mugesera (Eastern Province) and Gitarama wetlands (Southern Province) of Rwanda using eight survey nights blocked to three units of 2-3 consecutive recording nights each. During each night the recording was started at 7, 8 and 9pm in the study area.  The recording period accounted for 3-4 weeks/sampling session and was conducted at different microhabitats where frogs were likely to be calling out to conspecifics and intraspecifics. Bioacoustics recordings were obtained using the SonyJ PCM–D50 Linear PCM Recorder with stereo microphones or any other device able to record the call and later converted to mono-audio which in Adobe Audition Version 1.0 to analyze advertisement call structure based on previously recorded calls by Schiøtz (1999), Channing & Howell (2006) and du Preez & Carruthers (2009).

In the Mugesera wetlands, eight microhabitats where frog calls were sampled including uncultivated swamps near main roads and up to a 50 meters gradient away from the road, three distant edges of uncultivated papyrus, a semi cultivated swamp near road, a fish pond, and a dammed lake. In Gitarama district, microhabitats included a mud hole, a lake, irrigation channel with vegetation, a flooded uncultivated meadow, a central ditch, a partially flooded rice field, an irrigation channel without vegetation and a potato field.

Identified anuran community in Mugesera wetland consisted of six species: Afrixalus quadrivittatus and Hyperolius kivuensis (swamps near and in the <50 m from road but predominantly around ~20 m from road); H. kivuensis was calling from the edges of the papyrus vegetation; H. rwandae, A. quadrivittatus H. kivuensis and H. lateralis (from the semi-cultivated swamp, with H. rwandae call dominating); H. kivuensis, A. quadrivittatus in the fish pond vegetation; Kassina senegalensis (calling was remarkably higher in December collection at 7-8PM) and Xenopus victorianus (identified by homing in to the pond as the species calls under water); and H. viridiflavus highly dominant from the dammed lake.  Figure 1 shows some of these species.

In Gitarama wetland, the community was marked by eight (9) anuran species including Xenopus victorianus (in mud hole and slightly flooded uncultivated meadow); A. quadrivittatus, H. rwandae and H. kivuensis and H. viridiflavus on vegetation of the lake (H. viridiflavus dominating); H. kivuensis and A. quadrivittatus called from the irrigation channel with vegetation (high dominance of H. Kivuensis); A. quadrivittatus, H. kivuensis, H. rwandae, H. viridiflavus,  and Kasssina senegalensis (from uncultivated flooded meadow); H. viridiflavus and Amietia nutti (in the central stream); species were not identified from the calls from the rice field but Sclerophrys regularis were heard calling from vicinities of the rice field near Eucalyptus plantation; Phrynobatrachus natalensis was calling in the irrigation channel without vegetation. Around mud holes, Ptychadena anchiatae, Kassina senegalensis and Amieta nutti could be heard advertising, in contrast to Mugesera where few Ptyhadena spp. (nilotica group) were observed but not calling.  As it was observed, the calling activity was high during twilight (18-19h) and more intense during the month of October than November and December.

Areas with more microhabitats are most likely to have higher diversity of anuran species than locations with few microhabitats as shown in the preliminary results of this study. Data about distinct frog communities in relation to microhabitat types within wetlands, the diurnal partitioning of call time of the frog species in the wetlands, and the seasonal partitioning of call activity in frog species would be used to broaden the scope of this study.

Hanken, J. (1999). Why are there so many new amphibian species when amphibians are declining? Holocene invasions: finally, the resolution ecologists were waiting for! Trends in Ecology & Evolution, 5347(98), 98–99.

Mapendo Mindje and Lambert Tumushimire are graduate students at the University of Rwanda and University of Koblenz-Landau, Germany, respectively.