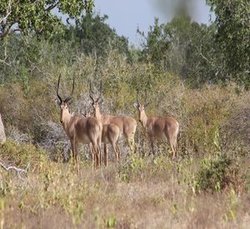 The hirola (Beatragus hunteri) is a rare antelope restricted to areas along the Kenyan-Somalia border. It is critically endangered and has been listed among 10-top focal species at risk of imminent extinction (IUCN, 2008, Isaac et al. 2007).  The likely extinction of the world’s most endangered and refugee antelope species could be the first loss of an entire mammalian genus in modern times.

Even though the governments of Kenya and Somalia instituted hirola conservation programs with legal protection since 1970, their population declined by 95% over the last four decades (Butynski 2000; Probert et al. 2015; Ali et al. 2016). Presently, its population stands at <500 individuals (Ali et al. 2016) and is restricted to small areas along the Kenya-Somalia border with no formal protection.

The initial decline of hirola was linked to a rinderpest epidemic in the 1980s. Even though the disease was eradicated a few years later, there was no desirable increase in hirola population. While there has been historical and political instability in the hirola’s native range, the reasons for their decline and subsequent lack of recovery has remained unclear until recently. We tried out evidence-based approaches to understand the causal factors underlying hirola declines and its recovery.

Firstly, we sought to answer two questions: (1) had hirola populations experienced habitat loss via tree encroachment? and (2) if tree encroachment occurred, did this result in intensified predation pressure on hirola? Since the mid-1980s, hirola have remained at low population densities throughout their geographic range, with predators’ abundance remaining relatively constant in the range (Ali et al. 2017). After a close examination and analysis of the long-term satellite imagery, we found that there was a nearly 300% increase in tree cover between 1985 and 2012 within this range, mainly by invasive species primarily, Acacia reficiens (Ali et al. 2017).

Historically, the optimal habitat for hirola was largely grassland with approximately 30% tree cover but this was now not the case. To understand the impact of tree encroachment across the range we used GPS telemetry and mark-resight and sight-resight analyses, to track hirola herds and their behavior while foraging in the areas. We found that they avoided areas with high tree cover all-year-round primarily due to food limitation (Ali et al. 2017). We further found grassland dependent species such as cattle and the endemic hirola antelope in the area had been affected, which subsequently also threatened local livelihoods dependent on livestock production.

Our analysis also indicated that tree encroachment and subsequent decline of range quality for hirola and other grassland species was brought about by elephant extirpation, overgrazing, fire suppression and climate variability in the region. As such, the declining and poor range quality through tree encroachment was the more likely factor suppressing the recovery of hirola, and a key factor underlying chronic low numbers of hirola.

Secondly, we investigated the demographic drivers of hirola declines by estimating their vital rates across 3 environmental settings of varying levels of predation and rangeland quality over the period between 2012 to 2015. Vital rates we included were survival rates and fecundity and their responses to environmental variations. The three settings were (1) a predator-proof sanctuary with relatively high rangeland quality because of minimal livestock grazing nested within the Ishaqbini Community Conservancy; (2) the Ishaqbini Community Conservancy with similarly high rangeland quality but in which large carnivores occurred; and (3) an area outside the community conservancy (rangelands) with similar numbers of large carnivores to the conservancy, but lower rangeland quality (i.e. high levels of livestock grazing with reduced forage availability).

Our studies showed species exhibiting rapid range collapse can be found in habitats with low rates of survival, recruitment, or both, leading to negative population growth (Pulliam & Danielson 1991; Caughley 1994).  With the establishment of the vital rates, we then developed population matrices, which we used estimate the finite rate of population change and demographic sensitivities.

Because large carnivore control is unethical and infeasible, the persistence of hirola may depend on the reversion of this excessive tree cover to grasslands in eastern Kenya. Rangeland restoration is therefore a prerequisite to the recovery of the critically endangered hirola antelope. Range restoration will be most successful, however, when it is supported by local communities and accounts for coupled relationships between human livelihoods and ecosystem function.

Following our findings, the Hirola Conservation Programme recently initiated a rangeland restoration project for this refugee antelope by assessing grassland recovery limiting factors using large scale multi-site experiments in their native range. This project will also have the knock-on benefit of improving local livelihoods. Their project has the support and participation of locals and is centered on century old Somali traditions including manual removal of trees, reseeding of grasslands and core area resting (planned grazing) for livestock as well as community-based elephant conservation and community engagement through education and empowerment. The findings from our research would also help to guide and enhance the chances of successful reintroductions of this highly endangered species.

Ali, A. H. (2016). Range Collapse, Demography and Conservation of the Critically