In Memoriam: Richard Nelson - Naturalist, Ethnographer and Author of the Arctic 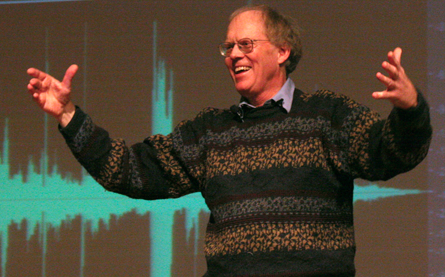 In 1977, I was living in Grand Teton National Park in Wyoming, in one of the most picturesque landscapes in the Americas.  I had earned a degree in Wildlife Biology and worked for the Forest Service and other jobs in Wyoming but was offered a job at the Naval Arctic Research Laboratory in Utqiagvik, Alaska (formerly Barrow) as an animal technician with several physiologists. Utqiagvik is 300 miles north of the Arctic Circle.  It was there that I first met the Inupiat Eskimo people and begin to learn about their way of life which included hunting bowhead whales.

I knew nothing about the Arctic when I arrived and was mainly trained in temperate region outdoor and mountaineering skills. About the time I arrived, a major bowhead whale study was funded by the US Government.  To participate in it, I had to learn how to survive on the sea ice to conduct the research. There was very little written material about sea ice skills, and it was then I discovered a book by Richard Nelson called “Hunters of the Northern Ice.”  His book was described by some as an “Eskimo Manual” with great deal of detail about arctic survival and hunting skills.

Richard Nelson was born and raised in the mid-west state of Wisconsin and earned a Ph.D. at the University of California. He moved to Alaska in the 1960s and lived for extended periods in Athabaskan and Alaskan Inupiat Eskimo villages. His Inupiat name was “Natchiq” which means ringed seal (Phoca hispida). In addition to Hunters of the Northern Ice he also wrote Hunters of the Northern Forests, Shadow of the Hunter, and The Athabaskans about the Native people that lived south of the Brooks Range just below the Arctic Circle.

Richard lived in Wainwright the 1960s and studied under the best hunters, trappers, and whalers at the time. He trained and drove his own dog team while hunting and trapping the inland regions of the Brooks Range foothills, and the sea ice. This was before the US Marine Mammal Protection Act of 1972, so he was able to participate in the hunts of seal, whales, and walrus.  He wrote up his experiences in detail which was a tremendous help for many researchers and biologist with projects on the sea ice.

I then spent the next 40 years of my life conducting research on bowhead whales working on the sea ice, learning from the local hunters and of course from Richard’s book.  However, it was not until about 15 years ago that I finally met Richard at Sitka, Alaska.  He had made his home there and was writing and producing the radio show Public Radio show “Encounters”. A superb series of writings and records on diverse subjects including arctic wildlife: caribou, ringed seal, polar bears, and ravens. He was physically strong and continued surfing the frigid waters of SE Alaska well into his 70s.

After our first meeting, I traveled to Sitka every year for the “WhaleFest” conference and always made time to meet with Richard. We shared a lot of stories about the Arctic. I learned even greater details of his experiences and the people of the region before snow machines, electricity, trucks and modern medical care.

Richard was an acclaimed and award-winning writer. His won the John Burroughs Medal for distinguished natural history writing, the Lannan Literary Award for creative nonfiction. He also, served as the Alaska State Writer Laureate.

It was a great honor to know Richard. I can say he was one of the nicest human being I’ve ever met.  I hope to carry on his work recording the lives of arctic people as well as the biology of the region.

Craig George is a conservationist based in Utqiagvik, Alaska. jtundra@barrow.com