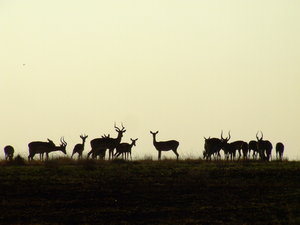 One of the most iconic images of Africa is a savannah teeming with a diversity of antelopes and their migrations in an intricate patchwork of grasses, forbs, shrubs and trees. How does this unique ecosystem maintain an array of these species? The process is referred to as niche partitioning. The rationale is that each species occupies its own niche, allowing resources to be divided amongst species in a way that minimizes competition and promotes coexistence.

However, there seem to be more antelope species than there are potential diet niches. One important niche axis is the separation of species whose diets may be dominated by woody plants (browsers), or grasses (grazers), or a combination of the two plant types (mixed-feeders).  Indeed, even distantly related species in the same niche share several anatomical, physiological, and behavioral traits. However, if partitioning along this axis was enough to explain the diversity of antelopes, then we would only expect a few specialist grazers, browsers and mixed-feeders in each ecosystem. By contrast, there seems to be much dietary overlap in real ecosystems, which tend to contain multiple – seemingly redundant – grazers and browsers.

One possibility is that further niche partitioning occurs at scales finer than the “browser vs grazer”. Collecting feeding data at such a fine resolution is difficult and resource intensive requiring hours of field observations. Thus, most detailed antelope dietary studies are limited to small geographic ranges, focusing on assemblages often within a single protected area; and/or to only two or three species, rather than the herbivore community. Such idiosyncratic data collection makes it hard to establish general patterns of niche partitioning.

Unlike their radioactive counterparts, stable isotopes do not decay over time. Thus, not only are the stable isotope compositions of plants dependent on physiology, but the isotopic signature of different plants can still be traced after they have been eaten by herbivores. This means that we can use the isotopic signature of herbivore feces as a reliable proxy for their dietary preferences. This provides a simpler alternative to studying dietary niches than the conventional approach of observing the foraging and habitat use by antelope.

Previous stable isotope studies have set the scene by supporting the hypothesis that herbivores vary their diets across a browser-grazer continuum (Cerling et al. 2003, Sponheimer et al. 2003).  Similarly, stable isotopes have also unveiled how browsing and grazing amongst savanna antelope does not follow the body-size scaling expected from ecological theory (Codron et al. 2007).

Our research aimed to expand on these studies by taking a holistic view of antelope isotopic niches across a large geographic extent. Our team collected antelope feces from 17 unique species across 10 different protected areas in the grasslands of central South Africa. We then quantified their isotopic niches to provide a thorough evaluation of the degree of niche overlap for entire antelope assemblages across a region spanning several hundred kilometers. This approach allowed us to build comparative models to analyze the inter and intraspecific variation of antelope dietary niches and how these may vary in response to the environmental conditions of different protected areas.

We have two key findings. First, we found that about 75% of the variation in stable isotope abundances occurred at between-species levels, whereas comparably little variance occurred at the within-species level. This immediately indicates a distinct pattern of niche partitioning among species, even accounting for substantial variation over space. Given the number and diversity of habitats and assemblages included in our data, this is some of the strongest empirical evidence indicating niche partitioning is a key factor underlying community structure in this animal group.

Second, there was significant geographic variation in the overlap of antelope isotopic niches. This could either be due to variable effect of the environmental conditions on niche structure (e.g. niche partitioning is more likely in low productive ecosystems), or it could reflect that a species’ dietary niche is partly determined by other species (e.g. species might have narrower dietary niches in the presence of competitors).

Regardless of which mechanism proves more likely, our findings illustrate that antelopes can’t just be interchanged through artificial introductions or translocations because the dynamics of populations and whole communities are dependent on patterns of species composition.

Our preliminary findings demonstrate how the dynamics of dietary niches can affect the co-existence of antelopes. With wildlife tourism bringing in revenues across Africa, there are increasing incentives to maintain a diversity of antelope for breeding, tourism and hunting. Understanding how antelopes can thrive together will be vital for ensuring their conservation, and the sustainability of tourism; especially in the context of anticipated environmental change.  Thus, our efforts are an important step towards ensuring that one of Africa’s most renowned scenes – a sunset-framed silhouette of antelope on plains – remains an enduring portrait for posterity.