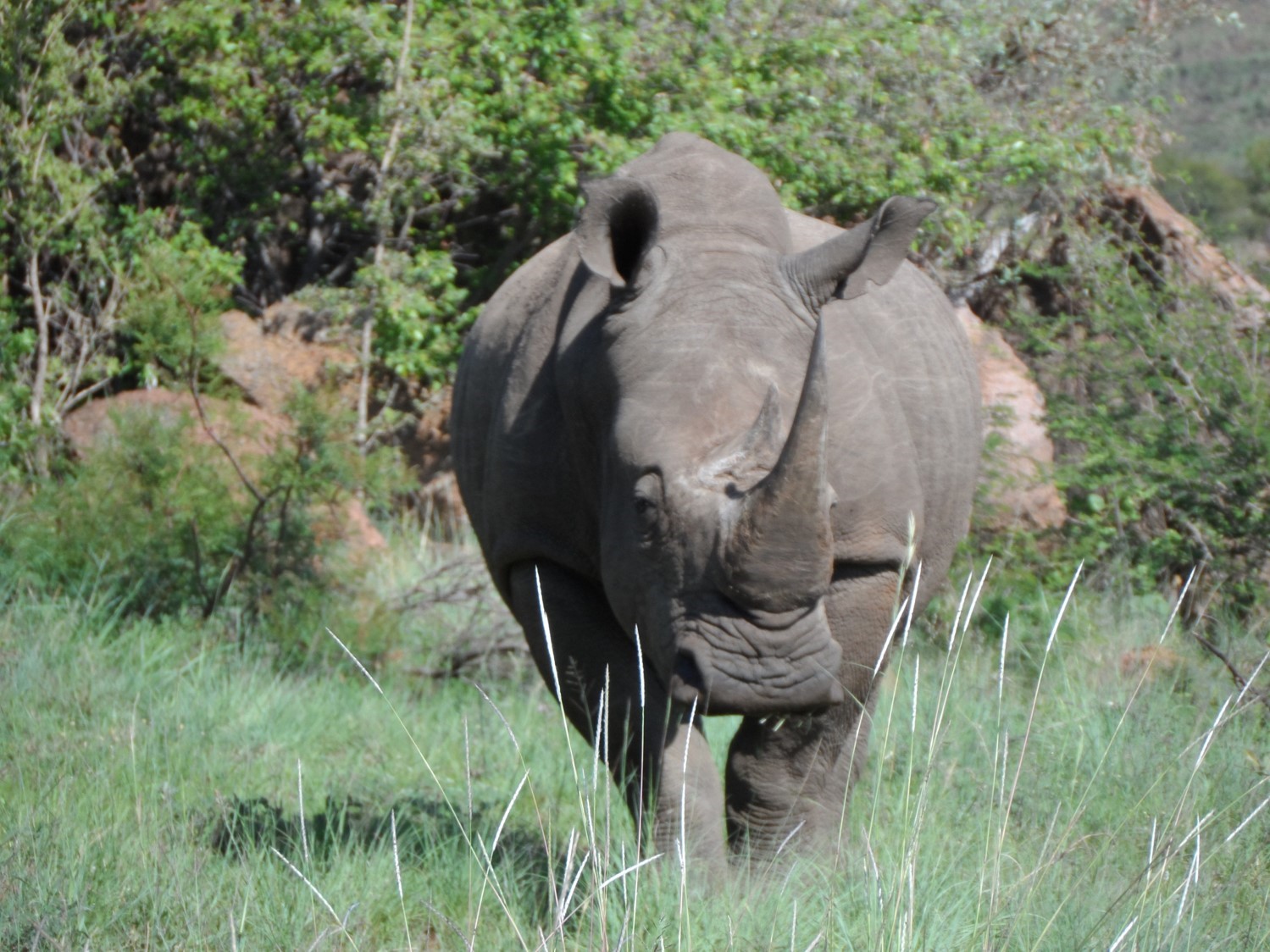 Rhinos are iconic animals of the African savanna and as one among the ‘big five’, they are popular in African safaris. The African rhino is comprised of two species, the black rhino (Diceros bicornis) and the white rhino (Ceratotherium simum). White rhinos are in South Africa, but they have also been reintroduced to Botswana, Namibia, Swaziland and Zimbabwe. As of 2013, the southern subspecies of white rhinoceros has a wild population of 20,405 making them the most abundant rhino subspecies in the world. Most of the black rhino population (98%) is concentrated in four countries: South Africa, Namibia, Zimbabwe, and Kenya. South Africa houses 40% of the total black rhino population.

Rhinos have been around for millions of years and played a crucial role in their ecosystem. They’re important grazers, consuming large amounts of vegetation, which helps shape the African landscape. This benefits other animals and keeps a healthy balance within the ecosystem. Local people also depend on the natural resources within rhino habitat for food, fuel and income.

Population explosion and urbanization have increased logging, agriculture, roads, settlements and destroyed rhino habitats as well. Although the African rhino species increased in numbers due to successful conservation efforts, especially in South Africa, they subsequently became at risk due to a huge surge in poaching to meet demand for illegal rhino horn, primarily in Asia. Countries and conservationists are stepping up their efforts, but record numbers of rhinos have been decimated to feed the demand for rhino horn.

Adult rhinoceros have no real predators in the wild, other than humans. Young rhinos can, however, fall prey to big cats, crocodiles, African wild dogs, and hyenas. Although rhinos are large and have a reputation for being tough, they are very easily poached; they visit water holes daily and can be easily killed while they drink. The most serious estimate, that only 3% of poachers are successfully countered, is reported of Zimbabwe.  Poachers have become more sophisticated. South African officials have called for urgent action against poaching after poachers killed the last female rhino in the Krugersdorp Game Reserve near Johannesburg. Statistics from South African National Parks show that 333 rhinoceros were killed in South Africa in 2010, increasing to 668 by 2012, over 1,004 in 2013.and over 1,338 killed in 2015. In some cases, rhinos are drugged, and their horns removed, which are bought and sold on the black market. East Asia, specifically Vietnam, is the largest market for rhino horns.

By weight, rhino horns cost as much as gold on the black market. Rhino horn is consumed purely as a symbol of wealth, people grind up the horns and consume them, believing the dust has therapeutic properties. Powdered horn is used in traditional Asian medicine as a supposed cure for a range of illnesses – from hangovers to fevers and even cancer. The horns are made of keratin, the same type of protein that makes up hair and fingernails.

Poaching syndicates, mostly based in Mozambique, but some within South Africa, are well-equipped, highly-organized and dangerous. They use helicopters, machine guns, veterinary immobilization drugs, night vision equipment and other sophisticated methods to stalk rhinos. This means countries and conservationists need to match this level of technology to be able to tackle the problem, alongside working to reduce demand.

WWF warns that the rhino poaching crisis was not only spreading to include other wildlife species like elephants and lions, but also impacting rural people living around protected areas because of their exposure to organized crime syndicates.

It’s imperative that the government, non-governmental and other environmental/wildlife conservation agencies in Africa collaborate to conserve African rhinos. Strengthening protected area networks, rhino habitat preservation, eradication of the illegal trade in rhino horn, crack down on poaching of rhinos, and conservation awareness are the tasks at hand. There is a dire need to recruit, train and equip wildlife scouts who protect rhinos from poachers. Eco-tourism that helps fund conservation efforts and compensate local communities for living alongside rhinos is another important aspect. The local communities living around protected areas should be allowed to use their natural resources more sustainably; and supporting the translocation of rhinos to create new, secure populations is a much-needed scientific aspect of rhino conservation.