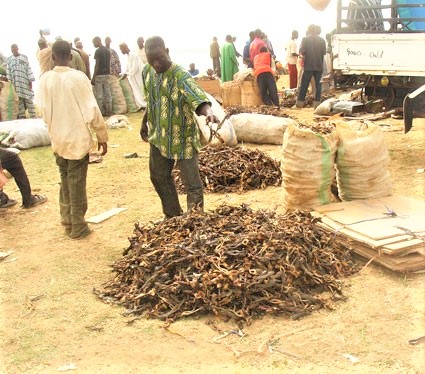 Amphibians play important roles in ecosystem services, medical research and as bio-indicators.  Yet, nearly 41% of all existing amphibians are threatened with extinction. Why this is so and how local interventions can influence global conservation outcomes is illustrated in this report.

Nigeria boasts of a wide variety of ecosystems ranging from mangroves and rainforests in the south, to different savannahs up north, to the Jos plateau in central Nigeria and mountainous habitats in Eastern Nigeria towards the Cameroon border (Onadeko and Rodel, 2009). About 115 species of amphibians have been recorded within the country, two of which are caecilians and one endemic species (Amietophrynus perreti) has been described in the country. A high biodiversity loss including steep decline in amphibian populations has necessitated assessment of the conservation status of amphibians in Nigeria. The causes of amphibian population declines are diverse and there appears to be no single cause for their decline (Blaustein et al., 2010), but the following factors are incriminated:

Habitat is key to the survival of species. According to Baillie et al. (2004), habitat loss is a key threat to about 70% of amphibian species. Most habitat loss is often due to agricultural expansion, logging, mining activities and land for human settlement. Nigeria has lost a vast majority of its rainforests and most of its savannah as well (Onadeko and Rodel, 2009).

In Nigeria, greater amphibian biodiversity is observed in areas around the coast. The Niger Delta is a region notoriously polluted because of the booming oil industry. Amphibians can be expected to be seriously affected by this type of pollution as their larvae feed off algae and continuously process water for respiration. Runoffs from agricultural farmlands into water bodies and nearby terrestrial habitats of amphibians also constitute a threat.

Climate change due to emission of greenhouse gases is global and have many implications for the survival of amphibians. These effects may be direct or indirect. Temperature plays an important role in the life cycle of amphibians (Blaustein et al., 2010). In amphibians, temperature acts as a controlling factor for many physiological processes, including rates of oxygen uptake, heart rate, locomotion, water balance, digestion, developmental rate, sex determination, and immune function.

Currently, a major disease that has contributed to the decline in amphibian populations is the chytrid fungus (Batrachochytrium dendrobatidis). Its spread is often enhanced by other factors such as climate change. It works by infecting the skin of amphibians, a vital organ necessary for respiration and exchange of materials. The disease is believed to have originated in Africa. The international trade of the African clawed frog, an asymptomatic carrier of the fungus, is believed to have resulted in its spread.

Anurans have been exploited for both consumptive and non-consumptive uses. Some frog species are edible and a delicacy to some ethnic communities in Nigeria. In Nigeria, dried, skinned meat of toads and fresh frogs has been found useful in the feeding of catfish and poultry, either as raw materials for processed feed or whole as food for catfish (Tran, 2015).  International trade in frog legs in 1998 was valued at approximately USD 48.7million (Teixeira et al., 2001). There has been an increasing trend in the export of frogs, and edible anuran species are being removed from the wild at a rate higher than replenished (Onadeko et al., 2012). In a study carried out by Mohneke et al. (2010), it was inferred that 2,738,610 frogs were harvested from the wild annually. Most frogs traded were reported to originate from the northern Nigeria and neighboring countries such as Benin, Niger and Chad.

In conclusion, without active and continued conservation efforts, amphibians will continue to decline at alarming rates. This will result in ecosystem imbalances detrimental to human life and biodiversity at large. It is therefore the ethical and moral responsibility of everyone to conserve amphibian populations. There is a pressing need to assess the populations of all amphibians in Nigeria. It is also important to maintain the remaining natural habitats especially, forests and to survey further for species that have, so far, escaped attention. Knowledge regarding amphibian diversity in Nigeria must be expanded. This will require partnerships between protected areas, local communities, government and non-governmental organizations and educational institutions. Monitoring programs should be put in place to ensure the survival. Frog farming should be encouraged with sustainable use in mind.

Onadeko, A. B., Egonmwan, R. I., and Saliu, J. K. (2012). Edible amphibian species: Local knowledge of their consumption in Southwest Nigeria and their nutritional value. West African Journal of Applied Ecology, 19(1), 67–76.

Oluwakayode M. Coker and Otobong M. Isong are researchers in wildlife genetics and biodiversity conservation at University of Ibadan, Nigeria