The Forgotten Chimpanzees of Uganda 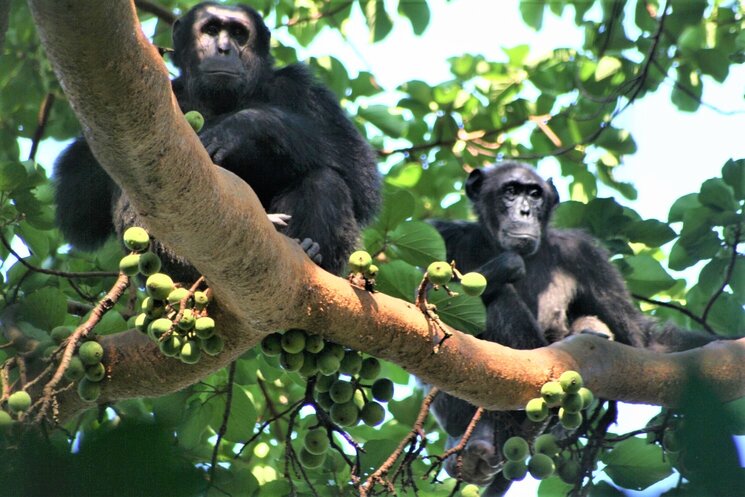 Uganda is home to around 5,000 eastern chimpanzees (Pan troglodytes schweinfurthii). Their populations can be found mostly in protected areas in western Uganda. Kibale National park has about 25% of Uganda’s chimpanzees. If 500 chimpanzees make up a viable population as surmised by researchers, Rwenzori National Park, Budongo and Bugoma Forest Reserves meet this criterion in addition to Kibale.  However, Maramagambo forest in Queen Elisabeth National Park, Kalinzu and Kasyoha-Kitomi Forest Reserves are interconnected by habitat corridors and are home to about 900 chimpanzees. This shows the importance of habitat connectivity for the conservation of endangered species.

The 2010-2020 IUCN action plan for conserving the eastern chimpanzee elucidates the importance of delimiting the chimpanzee conservation units to decide how individuals and populations fit into natural groups. They included the recent distribution and the historical distribution of the eastern chimpanzees to delimit the units. This strategy could preserve about 96% of known chimpanzee populations across most of ecoregions, capturing the range of ecological and cultural variation that exists within this subspecies. The action plan also states that key populations need to be identified as chimpanzees in East Africa occur in small forest fragments and, given the limited resources, this could save more individuals than focusing on forest fragments where populations have a reduced or minimal long-term viability.

In Uganda, chimpanzees occur mainly in national parks and forest reserves, but you can also find small populations living in forest fragments. This happens especially in Hoima, Masindi and Kibaale districts. These districts are located between some of the large forest blocks where the highest number of chimpanzees is found in Uganda: Budongo Forest, Bugoma Forest and Kibale Forest. The 2010-2020 Eastern chimpanzee IUCN action plan considered the Budongo-Bugoma corridor as one conservation unit containing between 100-500 chimpanzees, and planned to design habitat corridors that can allow genetic flow between Budongo and Bugoma populations while promoting conservation and supporting the local communities. This was also considered in the 2003-2008 conservation action plan for Uganda’s chimpanzees published by Uganda Wildlife Authority. Some well-known organisations like Jane Goodall Institute and Flora and Fauna International have worked to restore these habitat corridors.

The human population in Uganda has increased from 24 million people in 2002 to 45 million in 2020. Most people live in rural areas and grow cash or cereal crops by logging forests and leading to fragmentation and habitat loss. The chimpanzees which live in forest fragments get into conflicts with residents by raiding crops. Twenty people were attacked by chimpanzees in the past two decades in western Uganda, with the unfortunate deaths of some infants in villages. Therefore, coexistence between humans and chimpanzees is an urgent conservation need.

It is difficult to predict the future of forest patches that remain in western Uganda under the growing population, especially if they are privately owned. The country has lost a lot of its forest cover during the past years and it seems unlikely this situation can be resolved in the coming decade. When new corridors are restored to connect the main populations of chimpanzees in Uganda, more interactions will take place, and this could mean high conflicts with humans. At the same time, if the action plans to conserve the most important populations from the national parks and forest reserves work, chimpanzees would move not only outside habitat corridors, but also protected areas. Such scenarios lead to chimpanzees crossing over to human areas and they are lured by crops to cover their nutritional needs as their fragmented habitats don’t whet their appetites.

Following the IUCN guidelines for human-chimpanzee conflict mitigation and prevention, a raft of measures that allow coexistence should be implemented. Conservation awareness about sharing land with chimpanzees, alternative livelihoods, compensation for crop loss, reforestation and afforestation practices are measures that would help reduce human-chimpanzee conflicts.  As an example, the Bulindi Chimpanzee and Community Project is working in this direction for the conservation of a group of 22 chimpanzees while helping the communities to coexist with them.

The measures proposed by IUCN for improving the conditions of the corridors and of the populations in protected areas are clear and meaningful. However, how to conserve chimpanzee populations in the forest fragments outside the protected areas and ensure peaceful coexistence with the local communities? The answer is not easy, but every step in the right direction would make a difference.