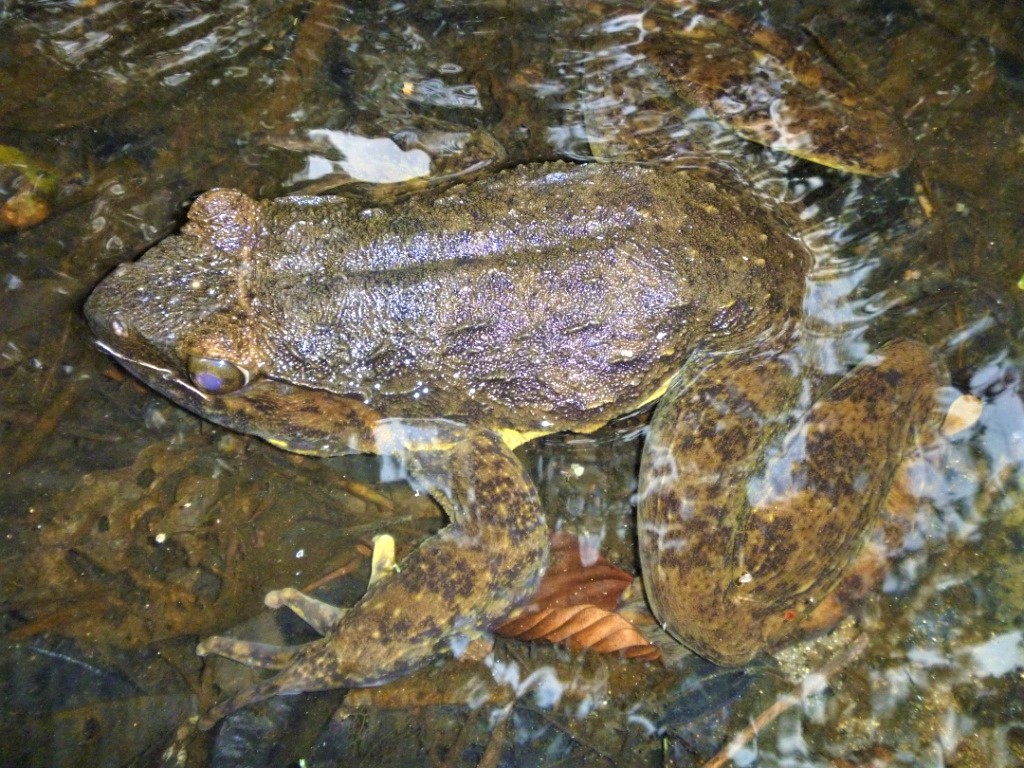 The goliath frog (Conraua goliath) of the order anura is known as the biggest frog in the world. Reaching up to 12.5 inches in length and 7.2 pounds in weight, it’s endemic to Cameroon and Equatorial Guinea (De la Riva, 1994; Amiet, 2004; Hans-werner et al., 2005). Although classified endangered according to the IUCN Red List and fully protected by Cameroon wildlife legislation, the goliath frog continuous to be threatened by habitat destruction and degradation due to human activities (Hans-werner et al., 2005) as well as illegal hunting or fishing for consumption and trade; the goliath frog is important source of proteins for local population (Gonwouo et Rödel, 2008). The ecology of goliath frog is not well understood, and this study aimed at amends.

We documented hunting pressure and population viability of the goliath with the aim to estimate the extinction risk of this species. Additionally, feeding ecology was studied to improve in situ and ex situ conservation efforts. Awareness campaigns were conducted in Moungo Division to sensitize local communities on the plight of goliath frog and try conserve this charismatic species.

The study area was in Moungo division located in Ouest Cameroon between 4°30’-5° N and 5°-10° E with the vegetation dominated by large farms of banana, cocoa, coffee, rubber tree and palm oil adjacent to degraded secondary forest.

During the period of August 2014 to January 2015, a stratified random sampling method was used considering the geographical proximity of the villages in relation to the rivers harboring the goliath frogs. Two hundred and twenty three (223) questionnaires were filled by residents in Bare-Bakem, Loum, Manjo and Nlonako villages; simultaneously 10 trails were delimited in 10 rivers and Visual Encounter Surveys (VES) (Crump et Scott, 1994) carried out at night four times in each river to observe and report the activities of the goliath frog.

Results: The goliath frog’s preferred habitats are fast flowing rivers, secondary forest and farmland. They can be solitary or in groups and invertebrates like crabs, snails, millipede, cray fish and spider constitute theirs majors food source. Their peak activity was from November to January which corresponded to the dry season. The local communities utilize them as food and prepare traditional medicine as well from these frogs that can jump more than 3m of height. The price of a single goliath frog varies from USA $3 to 9 depending of the size.

Intensive farming practices, illegal hunting or fishing, deforestation and palm oil extraction near riverine habitats have led to steep population declines of goliath frogs over the years. Much as weak laws prevent hunting, conservation awareness has made the local communities to rally for the goliath frog for sustainable harvests, scientific research, ecotourism, and thereby maintain ecosystem balance.

Local ecological knowledge gathered during the study has shown the rivers Mpoula, Ngounja, Mbo, Dibombe Mbete and True-Water harbor more frogs than the rivers Nkam, Ham, Sole and Tingue comparing their kilometric abundance indices. The mean temperature of these rivers was 24.0 ± 1.5°C during the night and the mean PH was 8.0 ± 0.7. The favorable moment to observe the goliath frogs is during the night in dry season when they come on the ground for feeding or on the bank to deposit their eggs, and no frogs were observed during our diurnal survey.

Bakossi people around Mount Manengouba, Cameroon, with special consideration of the Hairy

Ursla Koumbo is a herpetologist based in Cameroon.