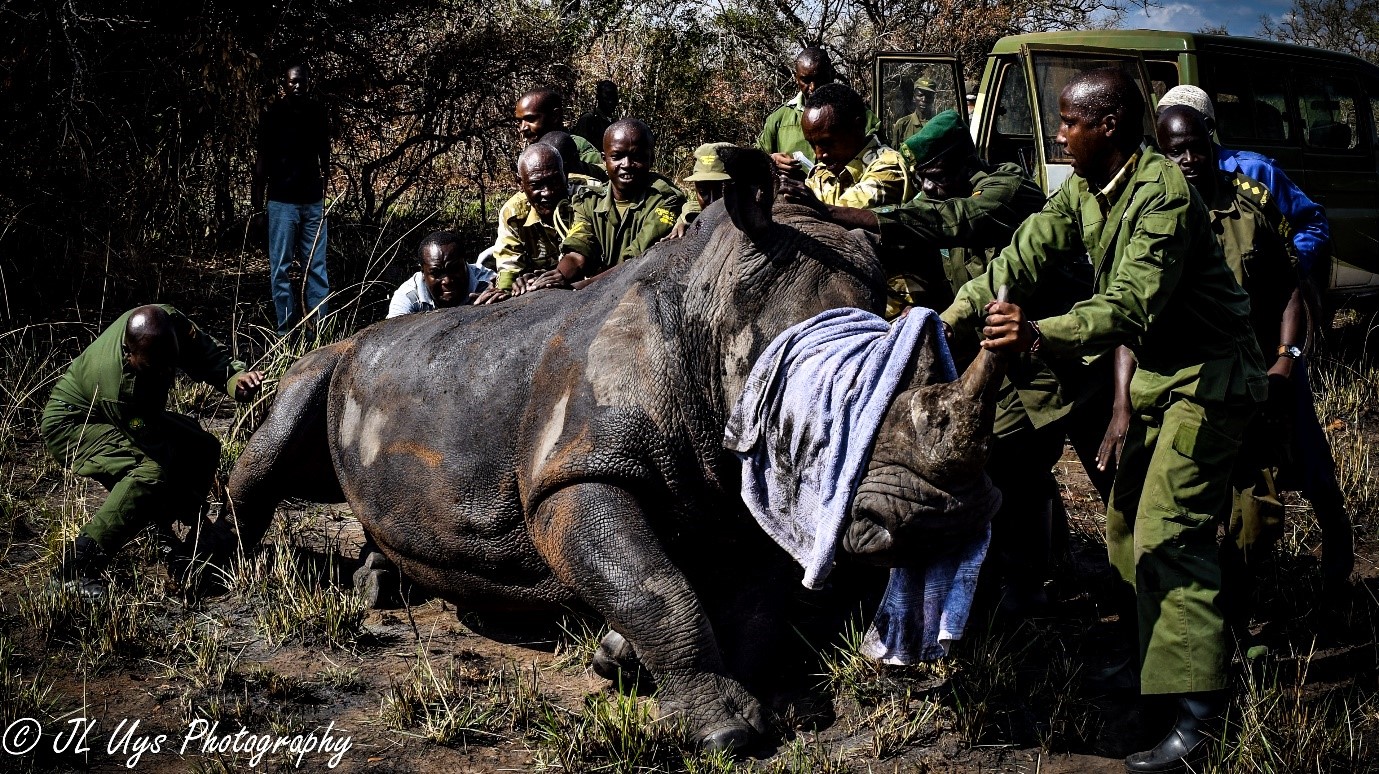 The presence of predators and other dangerous wildlife in rhino conservation areas can be restrictive on long-term, intensive research into ecology and behavior. Lions, elephants, buffaloes and hippos can pose a threat to human life, particularly at night. The establishment of a white rhino sanctuary on a former cattle ranch, with no dangerous game threats, has allowed researchers to peer behind the curtain and gain valuable insights about rhino behavior.

The Ziwa Rhino Sanctuary (ZRS) is a 70 sq. km enclosed area in central Uganda, operated by Rhino Fund Uganda in cooperative agreement with Uganda Wildlife Authority. Six founder white rhinos were introduced in 2005 and 2006, from which the population has grown to 24 in 2018. Each group of rhinos is accompanied 24 hours a day, 365 days a year by a two-man monitoring team who record the behavior of the rhinos on an hourly basis, from a non-invasive distance to ensure their presence does not influence the rhino behavior.

The data collected in an Excel spreadsheet and analyzed monthly using a purpose designed macro. Periodical downstream analyses are carried out when unusual observations are made or data across seasons is collated, and these are published in the specialist journal Pachyderm for swift dissemination to the most appropriate audience. Some of the highlights of the research outcomes from the hourly monitoring data collected since June 2010 include insights into white rhino nocturnal behavior, how the social organization develops and fluctuates as the population grows, confirming the white rhino gestation period as between 490 and 510 days, demonstrating the ability of dehorning to reduce fighting among adult males, and recording one of the earliest first-calving ages at four years and five months, with a maximum age at first-calving of five years and seven months.

From June 2010 to May 2011, the hourly behavioral data gathered showed that the rhinos covered the most ground between the hours of 15h00-17h00 and 22h00-24h00, with resting occurring most between 04h00-06h00 and 12h00-15h00. Their most active feeding periods were between 07h00-11h00 and 16h00-01h00, with drinking occurring from 10h00 and 15h00. These activity patterns fit with the traditional knowledge of rhinos in areas with readily available grazing and water. In harsher conditions they have been reported as active for more hours of the day and during the hottest hours. The data collected for this publication also enabled some analyses on the rhino habitat use and preferences.

In 2011, the first signs of serious aggression between the primary dominant bull and his closest rival led to the decision to take preventative action and dehorn the adult males to allow time for the younger males to develop without risk of injury or death. The dehorning intervention was not approved, and only after an immature male died as a result of his injuries incurred during a fight with the dominant bull in 2015, was the proposal to dehorn approved. A significant reduction in fighting was recorded in the two years since, and no further injuries or deaths have occurred. To date, this has been the only death occurring in the Ziwa Rhino Sanctuary since the rhinos first arrived in 2005.

Of the six births observed between June 2009 and January 2012, every birth occurred at night, primarily between 23h00 and 02h00. The only indication of the cows approaching calving was the act of chasing away their current calf, between three and 32 hours before the event. There was no change in habitat preferences of the cows prior to giving birth, but all cows moved into thick vegetation at the time of calving and moved into new habitats within three to 12 days afterwards. The “buddy system”, first reported by Shrader and Owen-Smith (2002), was very much evident in the social system and dispersal of the Ziwa white rhino population as new rhinos are born and new associations must be made by the previous calf.

After 56 months of data collection on social interactions, it was determined that the three adult males accompanied adult females for one to three 24-hour periods per month, with no lasting associations. Two of the three cows allowed juvenile and sub-adults to accompany them with new calves, but one remained alone with her calf. All juveniles formed new associations with either a cow and calf pair, or group of sub-adults within two hours of being chased away by their mothers. Sub-adults formed longer associations with each other (22 – 49 months at the time of publication; mean = 32 months), than they did with cow and calf pairs (6 – 17 months; mean = 10.3 months).

In 2016, the monitoring officers recorded a very early calving by a first-generation female, at the age of four years and five months. Given a 16-month gestation period, which has been repeatedly confirmed by the ZRS monitoring teams since 2010, that would imply conception took place shortly after the female turned three years old. The resulting calf experienced a birth defect in the form of a deformed hind foot, which eventually developed into a fully functioning foot. The foot defect could be a result of the early birth and the size of the young mother versus the fully developed fetus. The possibility of age at first calving decreasing in populations with abundant grazing and water and healthy carrying capacities has implications on increasing population growth rates. It is something not often reported as most free-roaming rhino populations are not monitored this closely.

For decades, the white rhino has attracted less attention from behavioral researchers, possibly as a result of being the rhino species of lowest conservation concern, and competition for research grants makes conservation dependent species more popular. This has resulted in our knowledge of the species often referring to original research work and those stemming from captive populations in zoological facilities around the globe. While this research is beneficial and insightful, there are distinct differences between captive and wild (or free-roaming) animal behavior and captive studies can only provide indications of the potential for similar outcomes in wild populations. The detail and volume of the data being collected daily at ZRS allows for a deeper understanding of the natural social and reproductive behavior, in-situ, than is possible in larger free-roaming populations. These contributions to our knowledge of an endangered species facing severe poaching pressures are critical, at a stage where managers are focusing on maximal population growth rates and regular translocations out of areas of highest risk. The successful establishment and safety of the Ziwa Rhino Sanctuary also lays the foundation for the suitability of translocations to areas outside of species’ historical ranges, should this be deemed necessary in the future.