<<< Back to Table of Contents 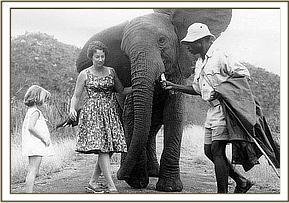 Tsavo National Park was officially gazetted as a wildlife refuge by Kenya’s colonial government in 1949.  It was by no means the best wildlife region in Kenya, but rather the only sizeable piece of country that was largely uninhabited by humans. It was too arid for agriculture, infested by tripanosomiasis-carrying tsetse fly which precluded livestock practices – a hot and inhospitable arid bush scrubland simply know in the early days as the Taru desert.

It was, however, home to a sizeable elephant and rhino population, some 45,000 elephants in the 16,000 square-mile Tsavo ecosystem (twice the size of the park itself which was 8,000 square miles).  It was home to some 8,000 black rhinos as well.

Human population pressures beyond the boundaries of the park deprived elephants of much of their original habitat, so additional elephant pressure was on the park proper, impacting the wooded scrubland which was gradually being transformed to open grassland, that was beneficial to grazing species but not to large browsers such as elephants and rhino. The changes in the habitat adversely affected the elephants who underwent a natural die off in the early 1970’s whereby nature targeted the females and their young creating generation gaps that put the population into further long term decline. (The artificial culling of entire elephant family units as practiced in southern Africa had the opposite effect – relieving pressure on the land but leaving remaining units intact so the breeding rate went up with the result that artificial culling of elephants was accepted as management practice).

Illegal poaching for ivory also exacted a heavy toll and today on some 11,000 elephants remain within the Tsavo greater ecosystem which once accommodated 45,000. (Indeed elephants as a species are facing ultimate extinction -- more being killed throughout Africa on a daily basis then are being born). Rhinos now only exist in highly protected fenced sanctuaries and the price of their horns is five times that of gold per ounce.  The horns are erroneously believed to have magical healing properties in the Far East despite being comprised of the same substance as a fingernail. As long as the demand for ivory persists in the Far East (China and Vietnam being the main culprits), elephants will continue to be annihilated for their ivory teeth and rhinos for their keratin horns.