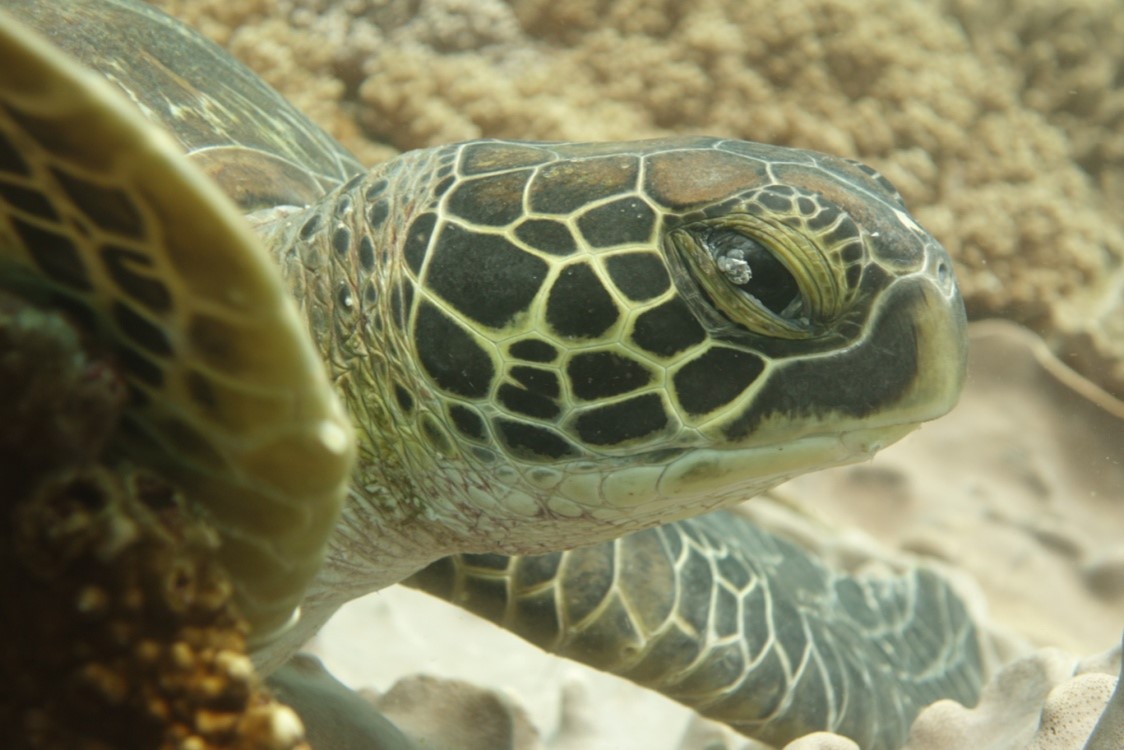 Kenya possesses an extensive coastline that boasts a variety of marine ecosystems, including coral reefs, mangroves, and seagrass lagoons that host rich biodiversity. Beyond these coastal waters are migratory corridors for marine megafauna, including humpback whales, whale sharks, and sea turtles, which are also known to nest on Kenya’s beaches. The lack of data on foraging and developmental habitats of sea turtles along the coast and on turtles migrating out of Kenyan waters is scarce, hindering our understanding of the full extent of threats to these populations. According to Okemwa et al. (2004), fishing activities outside marine protected areas are the biggest threat, with entrapment in fishing nets being a major source of mortality. Despite their importance, marine protected areas cover only 8.7% of coastal and marine habitats in Kenya, and lack of data is hampering the documentation and understanding of their efficiency in protecting marine biodiversity (Francis et al., 2002).

The Diani-Chale National Marine Reserve, located on Kenya’s south coast, was legally designated in 1995 as a result of an integrated coastal management pilot project, but failed soon after due to intense conflict between Kenya Wildlife Service (KWS) and local communities over benefit sharing (Evans et al., 2011). Because its status as a reserve is contested, and thus controversial, the area is currently nominated as the Diani-Chale Management Area (DCMA) by various local stakeholders (McClanahan et al., 2005).

The Marine Education Centre (MEC) in Diani opened its doors in September 2018 as a free, public resource for marine education, and a base for marine organisations working in the area, including collating knowledge of the marine biodiversity in the DCMA.  This incorporates monitoring and documenting the presence of migratory marine megafauna, such as whale sharks, cetaceans, and sea turtles using photographic identification (photo ID). This is a non-invasive, low cost, citizen-science-friendly approach that can be applied to any species whose individuals have unique skin patterns or other features that are stable over time. It allows researchers to obtain discrete information about individuals’ locations at a given time, which is essential knowledge for spatial planning and conservation management of endangered species. Sea turtles move ontogenetically between foraging locations, so photo ID can provide exceptional insights into the connectivity of different habitats. This is particularly interesting to study within the Indian Ocean, where the seasonal monsoon systems and complex oceanic circulation patterns may cause a greater variability of ontogenetic migration patterns compared to other oceans (Dalleau et al., 2014).

In the DCMA, the sea turtle photo ID database is managed by the Olive Ridley Project (ORP), with photos and data collected by the charity’s members, MEC staff, and local residents and tourists that participate in scuba diving or snorkelling activities in the study area. Additional photos are submitted of turtles by-caught in artisanal fisheries and released by the local sea turtle conservation program, Diani Turtle Watch (DTW). With each encounter, a photograph is taken, and data is collected, including the species, carapace length estimation, encounter location and depth, habitat preference, and behaviour. In a two-year period, from July 2018 to June 2020, ORP has recorded 2191 sea turtle encounters, 1935 of which were 441 individual green turtles (Chelonia mydas), and 256 of which were 58 individual hawksbill turtles (Eretmochelys imbricata). Nearly half of the turtles (48%) have been re-sighted, showing strong site fidelity. Two juvenile individuals, one green and one hawksbill, have developed external sexual characteristics during the study period, and a small number of adult males and females of both species (11 green turtles and 1 hawksbill) have been recorded. In-water observations show that green turtle densities are highest in sites dominated by soft coral habitat between 8m and 12m depth. This is expected of hawksbill sea turtles which are usually associated with coral and sponge dominated substrate but is atypical of green turtles, which are expected to feed on seagrass and algae. It is possible that a combination of factors including habitat quality and diversity, food availability, and lower levels of disturbance, may explain the high presence of juvenile green turtles on the coral reefs of the DCMA, regardless of a healthy seagrass meadow adjacent. Another observation is a relatively high prevalence of fibropapillomatosis (6% of identified green turtles), a disease that results in the growth of benign tumours, both external and internal. These tumours may interfere with swimming, feeding, vision, and buoyancy, and can lead to death. While the disease is caused by a herpesvirus, its prevalence appears to be associated with contaminated coastal areas. For this reason, tracking the evolution of this disease in this population serves as a tool to monitor ecosystem health (Aguirre & Lutz, 2004; Jones et al., 2016).

In conclusion, after two years of data collection and analysis, the DCMA hosts important sea turtle foraging aggregations with strong site fidelity. This gives an added value to this protected area as a location to promote in-water sea turtle encounters as a tourism activity. However, the preferences for shallow, nearshore habitats are likely to increase the encounter risk with artisanal fisheries, a problem that is being documented by DTW, and followed closely by ORP, who searches for photo ID matches of these turtles in the DCMA database.  Long-term aims of the project include the use of the data collected through the photo ID program to investigate the size structure, residency, and environmental, spatial, and temporal trends of sea turtles in Kenya’s coastal habitats. Ultimately, as the program is extended to other marine protected areas in Kenya, it will allow the identification of sea turtle movements between sites, within and outside Kenya’s coastal habitats and marine protected areas.