LACA Board of Directors 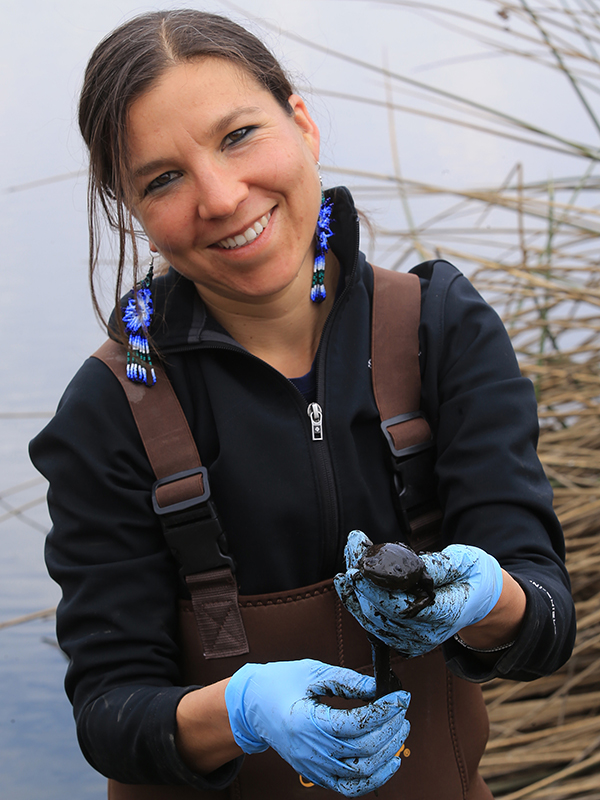 Karla is a professor in the Department of Environmental Sciences at the Universidad Autonoma Metropolita in Lerma, Mexico. She obtained a B.S. in Biology from the Universdad Autonoma de Queretaro, Mexico, a PhD in Natural Resources and Wildlife Management from the University of Arizona. During the last ten years, Karla has worked in wildlife and habitat conservation projects in northwestern Mexico and southwestern U.S., and seen first-hand the degradation of ecosystems to the point which they can no longer sustain native species. This is the reason why she is interested in the conservation and restoration of species and their habitat, and in the identification of important areas for the conservation of biodiversity. Karla has worked in projects for the conservation of the American beaver, black tailed prairie dogs, black-footed ferrets, black bear, and raptors.

Besides her research interests, she is also very interested in the development of new scientists. This is why she has taught different courses to transmit the importance of studying and conserving biodiversity. Teaching courses at the undergraduate and graduate level gave her the opportunity to show students how to generate research projects, how to carry them out and how to communicate their findings. Currently, as a professor at the Universidad Autónoma Metropolitana-Lerma, she have the opportunity to aid in the formation of young conservation biologists with a holistic view of the problems that biodiversity faces today. Karla is interested in conducting research on focal species in Mexico that required immediate conservation actions such as the axolotl, the volcano rabbit, flying squirrels, among others.

Tsitsi McPherson is a Guyanese ecologist with a PhD and M. Sc. in Ecology and Evolutionary Biology from the University of Connecticut (USA) and B.A. in geography and biology from the University of Guyana, Turkeyen  (Guyana).  Tsitsi is formerly an Assistant Professor of Biology, State University of New York College at Oneonta.  Tsitsi's research interests are in landscape scale biodiversity patterns and conservation planning that examines underlying political, economic, and social (socioeconomic and human rights) factors that impact conservation decision making.  Tsitsi's current research builds on her work in examining biodiversity patterns including protection of rare species, climate change and conservation planning.  Tsitsi is also interested in understanding how pro-sustainability behaviours can be leveraged to tailor pro-conservation messages.

She has been involved with the LACA section for over a decade, first as a member the section and later as Director of Nominations as a member of its Board of Directors.  She is currently the Chief Financial Officer and represents the section of the SCB Policy Committee.  She represented the section as the Co-Chair of the Equity, Inclusion and Diversity (EID) committee for the 2017 ICCB and Chairs the EID Subcommittee for the 2019 ICCB, providing continuity as SCB addresses issues of equity, inclusion and diversity. 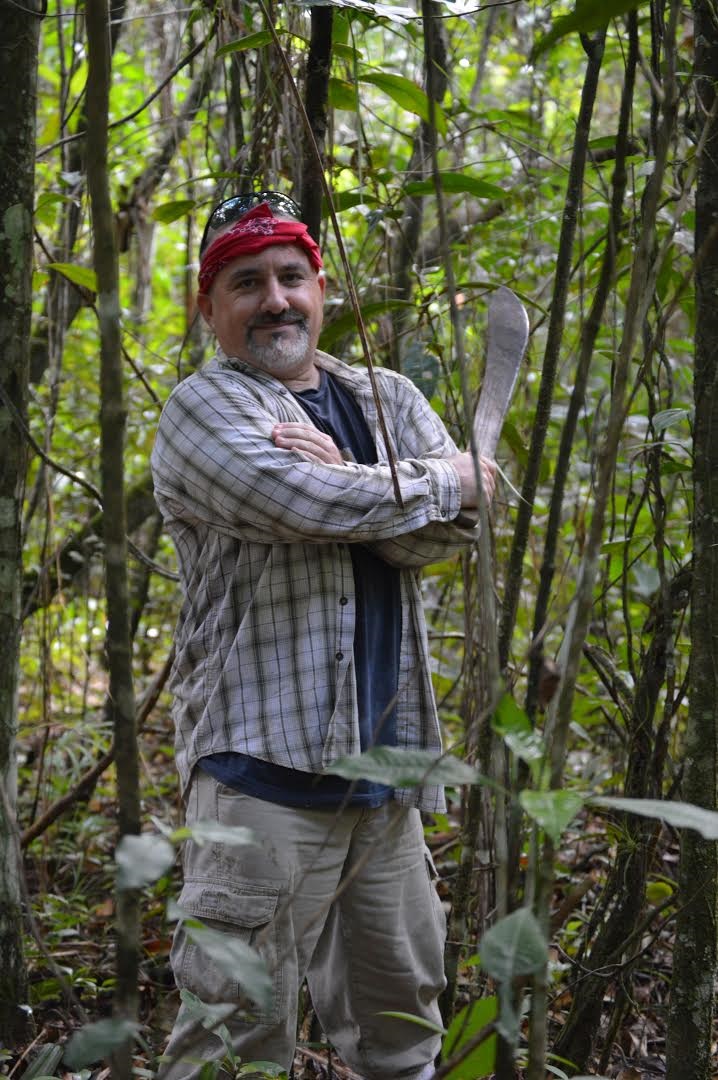 Anthony is founder and director of S.P.E.C.I.E.S. (Society for the Preservation of Endangered Carnivores and their International Ecology Study), the first and only organization dedicated entirely to the conservation of the world’s mammalian carnivores and the landscapes they depend on.  He holds a double B.Sc. (Honors) in Zoology and Environmental Science (Long Island University), an M.Sc. in Applied Ecology & Conservation Biology (Frostburg State University), and a Ph.D. in Wildlife Science and Management (Texas Tech University).  Anthony’s research focuses on all aspects of carnivore biology and natural history, with an emphasis on those topics and issues with direct conservation relevance.   He is also an active conservation practitioner, working to reduce human-carnivore conflict and mitigate other threats to the survival of carnivore populations.  Anthony received a Fulbright Scholarship for his pioneering work in the Gran Chaco of Paraguay, which lead to the first scientific study of jaguars in the country and the most established regional conservation program for the species.  He is also President of the Wild Felid Research & Management Association (WFA), an Applied Conservation Innovations Fellow with conservation technology leader ConservationXLabs  (CXL), and a member of three IUCN SSC Specialist Groups: Cat, Small Carnivore, and Peccary.  Anthony has previously served the members of the LACA Section twice as CFO and once as its President Elect, and chaired the LACA Section’s first Congress in Conservation Biology in 2018 (LACCCB). 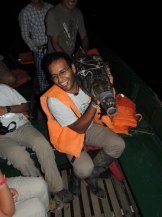 Eric Ramírez is a full-time researcher-professor at Universidad Autonoma de Puebla in central Mexico. He holds a Bachelors degree in biology from Universidad de las Américas, Puebla, a Masters in Natural Resource Management from Universidad Autónoma de Querétaro and a PhD in Biodiversity Management from University of Kent. He has taken several courses on management of endangered species at Africam Safari and Durrell Wildlife Conservation Trust. His research interests cover several aspects of conservation biology, ranging from species biology to environmental education and citizen science. Currently, he directs several projects relating to carnivore conservation, dealing with distribution, ecology and management of otters and felids in central Mexico. He has received funding from National Geographic, Panthera, Durrell Wildlife Conservation Trust and CONACYT. He has published numerous research articles in national and international journals and has given numerous posters and oral presentations in national and international conferences. He is part of the National System of Researchers, of the expert group on “conservation and sustainable use of the jaguar and other wild felids”, of the group on “conservation of tropical otter”, and of several professional groups at national and international levels.

Janeth is a biologist from Venezuela and a PhD student in Ecology at Pontificia Universidad Católica of Chile. She completed her undergraduate studies at Universidad Simón Bolívar in Venezuela, and earned a Masters degree in “Biodiversity in Tropical Areas and its Conservation” at Universidad Internacional Menéndez Pelayo in Spain. Janeth is interested in generating scientific information to guide and support the conservation of Neotropical biodiversity, usually working at large scales. She tackles this issue through spatial analyses, the use of large databases, ecological modeling, and by working together with otherdisciplines. She has also been working in Venezuela, Peru and Ecuador on GIS projects to determine potential threats, levels of biodiversity, and to identify priority areas for conservation. So far, her research has focused on: Systematic conservation planning in regions with extractive resources of high value (i.e. oil and mining in the western Amazon); mapping terrestrial and freshwater biodiversity patterns in the tropical Andes through ecological modeling; evaluating the effectiveness of Latin American protected areas; integrating economic costs with biological, agro-ecological, and human cultural diversities into conservation proposals.

If you are interested in being a member of the Latin America and Caribbean Board you must be a member of SCB and a member of the Section. Generally 2 to 4 board members are elected annually. The Call for Nominations goes out in November or December and the election runs in December or January. Each year section members receive an email about the open positions and the start of the election process. For more information about getting involved with this board, please contact lacabd@conbio.org. 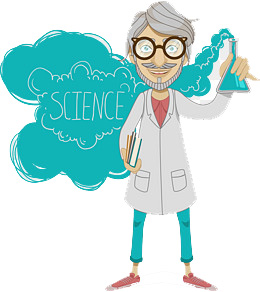 Who are the people behind the LACA Board?