The SCB Religion and Conservation Biology (RCB) Working Group unites academics, practitioners, and other professionals from around the world. It was established in 2007 by Tom Baugh with aims to strengthen the collaboration between faith traditions and conservation, and promote awareness of the importance of this collaboration within SCB and the conservation community, based on empirical evidence.

Welcome to our site! Please fill out the brief Contact Information Form to receive an invitation to join the RCB public listerv and learn more about what we do.

Check out the SCB Guidelines for Interacting with Faith-Based Leaders and Communities!

To join the Religion and Conservation Biology Working Group you must be an active member of the Society for Conservation Biology. If you are an SCB member, simply log into your member profile webpage and follow the “My Society Involvement” link on the right-hand-side of the page to add the RCB to your groups.

If you would like to formally join the Working Group and you are not a member, you can start here.

For any further questions, and if you would like to become more closely involved, do not hesitate to contact us. 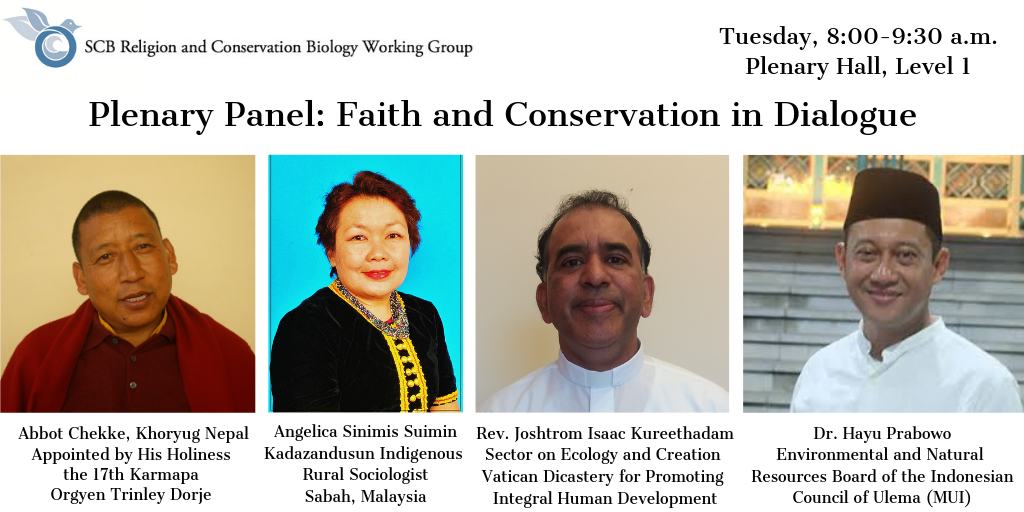 Workshop: Nature and Buddha Nature; Conservation and Buddhism in Asia 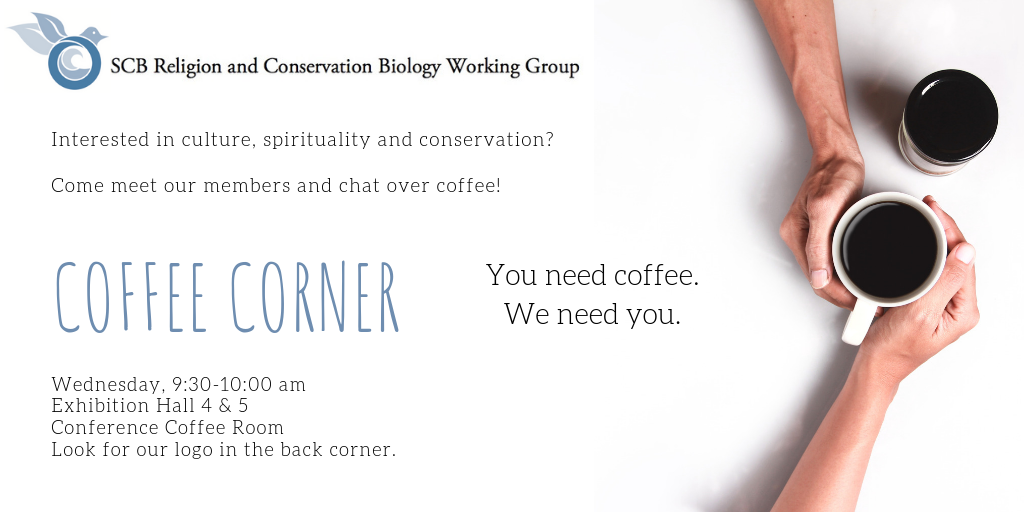 Sacred forests and conservation on a landscape scale in Ethiopia, The Gambia, Japan and Malaysian Borneo

The Assisi Award acknowledges organizations and individuals whose work demonstrates that faith-based conservation is contributing significantly to the common global effort of conserving life on Earth.

The Holy Wisdom Monastery is an ecumenical Benedictine community located near Madison, Wisconsin, with a mission to weave prayer, hospitality, justice and care for the earth into a shared way of life. Their community setting includes restored prairie, a retreat and guest house and a ‘green’ monastery building.

Sister Mary David Walgenbach, prioress of Holy Wisdom Monastery, said, “The Sisters and the women and men who support the Holy Wisdom Monastery are deeply honored to receive the Assisi Award. The Sisters and Holy Wisdom Monastery inherit the 1500 year-old Benedictine tradition of caring for creation. This heritage is lived today in collaboration with environmentalists and scientists in our building, the highest rated LEED (Leadership in Energy and Environmental Design) nc 2.2 Platinum certified building in the U.S. Our Wisdom Prairie Project improves the water quality of Madison lakes, streams and wetlands.”

The name of the Assisi Award celebrates a historic 1986 meeting where leaders of all major world religions made public declarations to protect the environment. The meeting was an initiative of His Royal Highness The Duke of Edinburgh, President of WWF International at the time.

The town of Assisi was chosen as the meeting site due to its connection to St. Francis, a saint ecumenically admired and also respected by non-Christians in virtue of his reverence for nature and close bond with the natural world.

The Assisi Award recognizes initiatives from around the world conceived in the context of major world religions as well as indigenous spiritual traditions.

Frascaroli said, “We hope the award will highlight how the drive to protect the biosphere is not the prerogative of a single philosophy, but rather stems from a variety of worldviews, values and knowledge systems.”

Holy Wisdom Monastery was not the only religious entity to be acknowledged at the opening ceremony of ICCB. A Franciscan missionary, Fr. Hermann Borg, received the SCB Distinguished Service Award for his exemplary work in Kenya, which showcases the true meaning of Stewardship,.

Father Borg explained, “We started to plant trees in Subukia 30 years ago. We did not know what we would achieve, we just started to do it. These 1 million trees have now grown tall and have changed the climate and improved the livelihoods of the people.”

Father Borg hopes that his efforts can contribute to inspiring others and spreading the message of the Holy Father concerning the environment. He commented, “As the Catholic Church is the most globally spread institution, we should not underestimate its potential for influencing people regarding the respect for nature. I think this is a realization of the teachings of Laudato Si’, which motivates so many local, regional and global actions.”

The importance of faith-based approaches to conservation is gaining recognition. On June 19th, religious and indigenous leaders from 21 countries convened in Oslo for the Interfaith Rainforest Initiative, supported by Norway’s King Harald V. Last September, the International Union for the Conservation of Nature (IUCN) World Conservation Congress (WCC) passed Resolution 33, which stated that “effective and equitable approaches to the design, governance and management of protected or conserved areas need to be grounded not only in science but also in cultures, religions, worldviews and co-existing customary practices relating to nature.”

At the ICCB, the RCBWG is hosting a symposium and workshop for its Best Practices Project, compiling a set of guidelines and best practices to support scientists to hone communication and successfully work with faith groups. ICCB sessions relevant to faiths and conservation can be found on the RCBWG website: http://conbio.org/groups/working-groups/religion-and-conservation-biology.

This Franciscan missionary's been planting trees in Kenya for 30 years

A summation of the Religion and Conservation Biology Working Group's (RCBWG) Best Practices Survey of SCB members on engaging faith communities is now available. Conducted on behalf of RCBWG from May 31-September 10, the survey results underscore the benefits to conserving biological diversity when researchers and practitioners relate positively to faith leaders and communities.

Respondents to the survey also shared their approaches to engaging leaders and members of faith communities in ways that might be helpful to other SCB members. Societal support for conservation has become increasingly vital for approval, collaboration, and advocacy of scientific solutions aimed at mitigating threats to the loss of biological diversity on the land and in the water. Results of the survey point to religious and native faith communities as allies in this quest.

Prepared by Jame Schaefer (Marquette University) and Susan Higgins (Center for Large Landscape Conservation) who serve on the RCBWG Board, “Best Practices Survey—Promising First Step toward Developing Guidelines” provides an overview of the responses to ten questions submitted by thirty-nine SCB members who have engaged leaders and members of faith communities in conservation projects. The faith communities represent the major world religions--Judaism, Christianity, Islam, Buddhism, and Hinduism--and a diversity of native spiritualities including Australian Aborigine and Native American.

The Best Practices Survey was launched by the RCBWG as the first step of the three-year Best Practices Project aimed at producing guidelines for SCB members to consider when planning and conducting conservation research and application. During the second step proposed for ICCB 2017, the successful practices of some SCB members who participated in the survey will be highlighted in a symposium followed by a workshop during which best practices guidelines will be drafted. They will be refined subsequently, processed through several iterations, and presented to the SCB Board of Governors for recommending to SCB members.

The RCB Working Group has become aware of practices in which religious communities engage that are causing havoc in biotic communities. Among these problematic practices is the widespread aberration of the Buddhist ritual of releasing animals that was originally intended to show compassion but has since fallen short of this objective. One of the Committees of the RCB Working Group, the Religion and Conservation Research Collaborative (RCRC), was formed to research this problem and to recommend the adoption of policies that appear in a brief endorsed by the Global Policy Committee of the SCB titled "Prayer Animal Release Can Embody Conservation Principles: A Call to Action."

Thus far, religious communities have reacted positively when made aware of scientific facts that point to deleterious effects of their practices. Some ideas for native species to be released in appropriate areas have been shared by Buddhists when interacting with scientists. These collaborative efforts initiated by the SCB to resolve problems bode well for biological conservation, the well-being of people who are involved, and the flourishing of Earth.

Media and others seeking additional inforation may contact Stephen Awoyemi, president of the Society for Conservation Africa Section and SCB's Religion and Conservation Biology Working Group. Kit Magellan at the University of Hong Kong is available for media outlets in Asia.

Applications for 2016 award are currently under consideration

The award is meant to acknowledge organizations and individuals from around the world that demonstrate outstanding successes in conserving the Earth’s biological diversity based on their faith and spiritual understanding. The award will target initiatives conceived in the context of both mainstream religious groups and indigenous traditions, and will be assigned based on evidence of conservation achievements and coherence with the spiritual values that drove conservation efforts. This award will help to strengthen the dialogue between faiths and conservation, and permit to collect important information about faith-based conservation efforts around the world.