Topic: Shark Conservation in India: a story of sharks for and against the fishermen of India: Molecular assisted identification of sharks, rays and chimaeras at landing sites in India.

Sharks (here Sharks = Sharks, Rays and Skates) are one of the oldest and most diverse of vertebrate lineages and they play an important role as apex predators through top-down regulation of trophic cascades in oceanic ecosystems. In this capacity, they are vital to long term sustenance of teleost fisheries worldwide.

Often caught as incidental in the past, sharks have in the last few decades become a target catch in many parts of the world because of the high value of their meat, fins, liver oil, and gill plates. In addition, the depletion of teleost fish stocks in world oceans is driving up demand for sharks, as an alternative source of seafood. India, given its high biodiversity of shark species has emerged as a key player in the global supply-demand chain and is now the 2nd largest supplier of shark products to China after Indonesia. The north western coast of India in the state of Gujarat, has the highest share of shark landings within India.

India is highly data deficient with respect to shark stock assessments and the extent to which shark stocks have been depleted is unknown. Stock assessments and sustainable catch limits for sharks are currently based on those of teleost fishes and species specific catch limits for sharks are not implemented. Although shark survival rate is usually high, if populations are rapidly depleted, their relatively lengthy generation time, small litter sizes and highly restricted habitat preferences can make recovery of shark populations difficult and lengthy. These characteristics make sharks highly vulnerable to fishing related extinctions locally as well as globally. Thus, India’s astronomically high landings share (>70,000 tons/year), may have already decimated many and will continue to drive many shark species to extinctions.

In order to determine the extent of the damage and to prevent further damage to shark species and the oceanic ecosystem as a whole, the Indian coastline, which is one of the most data deficient areas with respect to sharks, needs to be assessed for species specific population abundance with a high taxonomic resolution. In addition, public awareness about the pivotal role of sharks in marine ecosystems and about a possible collapse of the fishing industry in absence of regulatory practices needs to be generated. 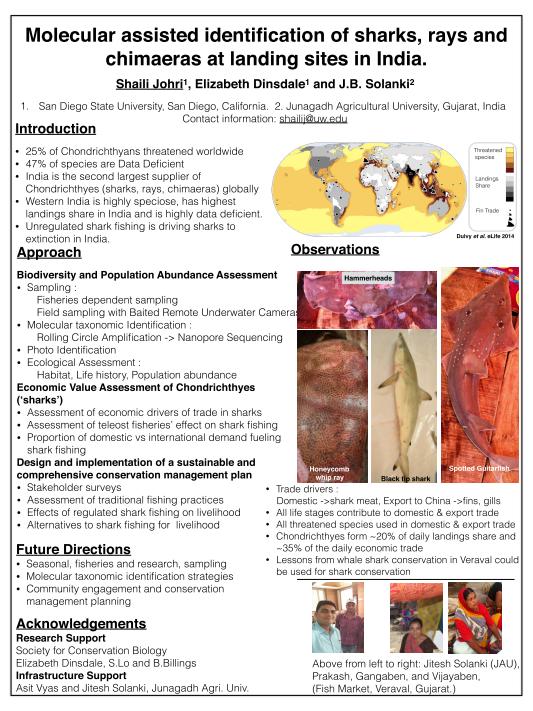 Shaili Johri (Postdoctoral fellow, San Diego State University, CA) is pursuing research on both of the above issues in the western Indian port of Veraval through a grant from the Society for Conservation Biology Marine Section’s small grants program. Veraval has the highest share of shark landings in India and is one of the most species rich areas of India with respect to sharks. Shaili and her colleagues (Elizabeth Dinsdale, San Diego State University, California and Jitesh S., Junagadh Agricultural University, Veraval) are using sampling of sharks at landing sites as well as sampling through eDNA and baited remote underwater cameras to determine shark species and their population abundance and ecology in the waters around Veraval, Gujarat.

Shaili is also collaborating with social scientists and economists to understand the socio economic aspects of the shark trade and to assess stake holder interests, in order to design a sustainable, all-inclusive shark conservation management plan.

Preliminary findings indicate that both a domestic demand for shark meat and international demand for meat, fins, gill plates and liver oil is driving the shark trade in Veraval. The shark fishing industry constitutes the main form of livelihood for fishing communities in Veraval, and is thus a difficult yet very important area for intervention through sustainable conservation management.

As Shaili and her colleagues continue their research and strive towards a sustainable management plan, they welcome suggestions and questions from everyone, but especially conservationists with expertise in socio-economic policy and stake holder assessment and management.

For questions and collaboration proposals please contact us at: