The Unconscious Biases Between People and Nature 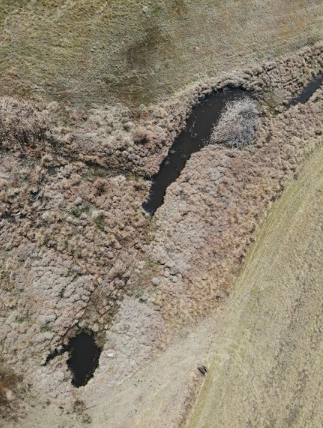 A drone image of a wetland. Credit: Falko Buschke

Last year, the Intergovernmental Science-Policy Platform on Biodiversity and Ecosystem Services (IPBES) released its first global assessment report summary for policymakers (IPBES, 2019). The headline message from this report was unambiguous: “Nature and its vital contributions to people are deteriorating worldwide”. This defies logic. Why would we destroy nature when our own survival depends on keeping it healthy?

It is hard to believe that we would willingly cut off our own life-support system by harming the very ecosystems we rely on. Unfortunately, our research suggests that this is exactly what we are doing. Our self-destructive behavior is partly sustained by unconscious biases in the way we interact with nature and the people around us.

For our research, we surveyed rural communities in the Maputo-Albany-Pondoland Biodiversity Hotspot in South Africa to explore how they interacted with wetland ecosystems (Pantshwa & Buschke, 2019). In this area, less than 30% of inhabitants have access to piped water, so their lives literally depend on clean water from dams, streams, and wetlands. During our surveys, we asked community members - among the poorest in South Africa - whether they benefited from the ecosystem services supplied by wetlands or not. Every single respondent confirmed that they did indeed benefit from wetland services.

However, when we asked them how often they partook in activities that damaged wetlands, we discovered something counter-intuitive. While some respondents admitted to damaging wetlands by doing things like grazing their cattle or planting crops, in general, most people believed that they rarely, if ever, damaged wetlands. On the contrary, these same people believed that their neighbors partook in damage-causing activities much more frequently. This effect was consistent across the community because everyone blamed someone else for damaging the very ecosystems they all depended on.

It is likely that some community members damaged wetlands more than others, but our statistical analysis suggested that respondents were not blaming those few bad actors. Instead, there was a consistent, albeit biased, the relationship between self-reported damage to wetlands and the damage attributed to the group. Nearly all respondents attributed more blame to their neighbors for damaging wetlands, even when they admitted to damage-causing activities themselves. It seems that our survey respondents had an unconscious tendency to blame their neighbors for harming nature.

How can we convince people to preserve the planet when we don’t even acknowledge responsibility for damaging it? The first step is to understand the cognitive biases underpinning this blame-game.

First, people might believe that they are less harmful to nature than others. This is bad news because people's behavior tends to mimic their perceived social norms (Gifford & Nilsson, 2014; van Vugt et al., 2014). Eventually, we tend to act in ways we believe are normal in our societies.

Alternatively, people might be susceptible to cognitive biases that underestimate their own negative impacts (St John et al., 2010). For instance, people might present a social-desirability bias, where they try to project a favorable image of themselves relative to the rest of society; or they might demonstrate an illusory superiority bias, where they harbor positive illusions about themselves. Either way, cognitive biases tend to result in poor decision making because they rely on distorted perceptions, not facts (Campbell et al., 2009).

Lastly, people might be blaming others to cope with an overwhelming feeling of not having control over the worsening environment (Nerb et al., 2008). This would be particularly unfortunate because it implies that people are abandoning their personal agency due to feelings of hopelessness and helplessness.

Even when we are completely aware of the benefits we gain from nature, we can still damage the very same ecosystems we rely on. Our unconscious brains automatically blame others. Although there are at least three possible reasons why blame is our default setting, we need to urgently understand how to overcome these automatic unconscious biases. It is still unclear how we will do this, but in our opinion, it should be a priority for the next decade.

Gifford, R., and Nilsson, A. (2014). Personal and social factors that influence pro-environmental concern and behavior: A review. International Journal of Psychology, 49: 141– 157.

Falko Buschke is a conservation biologist based in South Africa