The role of women in conservation biology and their advancement of the discipline globally are evident to all. Unfortunately, African women are currently underrepresented in the field of conservation science on the African continent. The Africa section of the Society for Conservation Biology (SCB) has identified this gap and created the Young Women Conservation Biologists group (YWCB) in 2005.

We were formed as a vehicle to advance career opportunities for young African women in conservation and to give support and encouragement to our membership. To join this group, send your information to ywcb-africa at gmail.com.

Based on our five core objectives, current efforts aim to:

The YWCB Award for professional African women is a non-monetary incentive award aimed at recognizing and applauding the contributions of early to mid-career African professional women in conservation. The nominees should have demonstrated, during their career so far in Africa:

When possible, the YWCB award is presented at the Africa Section Business Meeting at the Society for Consevation Biology's International Congress for Conservation Biology (ICCB) or the SCB Africa Section Congress. SCB and the Africa Section strive to secure financial support for the recipient to travel to the meeting from their workplace to to receive the award in person, and to present a paper on the recognized work.

Scope of the Award

The scope of the award is open to any area of conservation science directed towards practical conservation action. A nominator of established professional standing should submit the application on behalf of an exceptional nominee. This should be supported by at least two letters of recommendation by additional referees. Under unusual circumstances only, if a highly accomplished candidate works in such isolation that a nominator is not available, the Awards Panel may consider self-nominations.

The application should clearly explain the nominee’s role within the conservation community and evidence of her professional accomplishments, including her ability to work with diverse interests to achieve balanced and pragmatic solutions to conservation challenges. The Awards Panel will not normally make awards to African women working outside the continent, nor to early career students with no outstanding practical accomplishments.

Nominations will be peer-reviewed by an Awards Panel of SCB conservation scientists and managers.

Potential sponsors of the award are warmly invited to contact the Awards Panel via the YWCB email address: ywcb-africa at gmail.com. 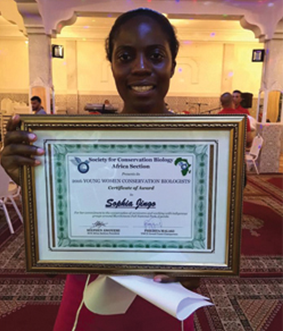 The YWCB Working Group was established in 2005 by the Africa Section of the SCB, based on an urgent need to fill the gap created by the limited numbers of women professionals in the field of conservation science in Africa. It was further mandated to act as a platform for early career African conservation biologists to share experiences (albeit with a major emphasis on women), generating incentives and mentorship opportunities to strengthen female conservation biologists in their careers.

FIND US ON FACEBOOK!
The Africa Section is now on Facebook!
“Like” our page to keep up on the latest communication and exchange of important information and research ideas