In an historic move, the Europe Section hosted the annual International Congress for Conservation Biology by combining ECCB with the global SCB conference on the Mediterranean coast.  We expected that the normal high standard of talks and accompanying events would attract a typical ICCB audience from around the world whilst European delegates benefitted from special events with a regional focus.  In line with the conference theme, “Mission biodiversity: choosing new paths for conservation”, we organised a novel mix of interactive components to facilitate collaborations between conservationists that may not ordinarily cross paths.

The third European Congress of Conservation Biology was held in Glasgow, Scotland (UK) in 2012 with the theme of “Conservation on the Edge” to reflect Scotland’s position on the Atlantic seaboard of Europe. The meeting had a strong policy emphasis including a ‘policy note’ exhibition and the production of the 3rd ECCB Policy Statement which can be read here.

The second meeting took place in Prague, from September 1st to 5th, 2009, focusing on the theme “Conservation Biology and beyond: from science to practice”. It was hosted by the Czech University of Life Sciences. 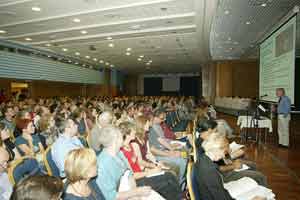 The European Section of the Society for Conservation Biology, and the Hungarian Natural History Museum, Budapest organised the first ever European conservation biology meeting in 22-26 August 2006, in Eger, Hungary. The theme of the meeting was "Diversity for Europe," reflecting the variability of Europe’s biology and culture, and also the diversity of ways nature conservation acts. The meeting had over 1000 participants, representing all but one European countries, and the full range of conservation biology from applied ecology, GMO, climate change to planning and managing nature conservation. The list of plenary speakers included top scientists from Europe and from other continents, like John Lawton and Georgina Mace and Robert Pressey, and prominent EU stakeholders, like Ladislav Miko, director of Nature Conservation of DG Environment. A large number of exhibitors, active media coverage and various field trips and social programs contributed to the success of the congress.