Crises, such as the war inflicted by Russia and Belarus on Ukraine, are not only devastating for society, but also for the environment. It is the newest in an unlimited series of crises of human wellbeing, including economy finances, food provisioning, health, energy, climate and biodiversity . Harmful exploitation of our environment as a quick problem solving during such emergency situations will inevitably provoke new humanitarian crises, scientists warn.

Keep hands off forests as an energy source for increased harvests of fuel wood inside the EU, meant as a replacement of missing imported fossil fuels from Russia and Belarus. Instead, the old-growths forests remaining in Europe must be protected without further delay, and wood harvest levels should be considerably decreased. Forests combat climate change, provide water resources and clean the air, and we need them as protective shields against temperature increases and droughts. Forests are not renewable.

Abstain from opportunistically ‘switching off’ and bypassing well-established environmental checks in infrastructure planning, such as cutting through unfragmented natural areas for wind power installations. Only with scrupulous environmental impact assessments can we avoid the trap of affording wellbeing at nature’s cost. Environmental law should be closely followed, now more than ever.

No border walls: they do not stop people, but dissect nature

Redirect investments in the construction of border fences and walls towards the support of ecosystem conservation in the source regions of human migration. Border fences are proliferating in Europe without any environmental impact assessment, nor compensation or mitigation measures. Data clearly show that they do not hold back humans, but dramatically disrupt animal populations and impact natural ecosystems.

Keep on track towards environmentally sound food production and halting human food waste. Intensification of agriculture through increased use of fertilisers and pesticides, drainage of natural wetlands or cultivating on marginal, unproductive land will lead to only tiny increases in food production, but will instead have large and long-lasting detrimental impacts on the natural foundations of human wellbeing, including climate protection.

On a positive note, it is crucial to recognize that protecting healthy ecosystems is an important contribution to peace-keeping. An intact natural environment allows humans to enjoy wellbeing where they are, without the necessity to compete for natural resources or being forced to migrate to other regions. Likewise, it is stressed that biodiversity conservation provides us with tested tools for peace-making: Transboundary protected areas invite for cross-border collaboration, and peace parks in several parts of the world have successfully pacified violently disputed border regions.

From 22nd to 26th of August, around 700 conservation professionals from 45 countries gathered in Prague for the 6th European Congress for Conservation Biology (ECCB 2022). During four days of symposia, invited plenary talks, workshops and discussion panels, participants reviewed subjects pertinent to conservation science, ranging from biological to societal and political topics. The relationship between biodiversity conservation and peace, as explained above, was discussed during a panel with representatives of conservation biology, sociology and political decision-making from Ukraine, Poland, and beyond. Another important outcome was the adoption of the “Prague Manifesto for Biodiversity Conservation – ECCB 2022” that expresses fundamental concerns about the dire state of European biodiversity, and the urgent need to act for its effective conservation through adopting science-based solutions by decision-makers.

*Link via image below 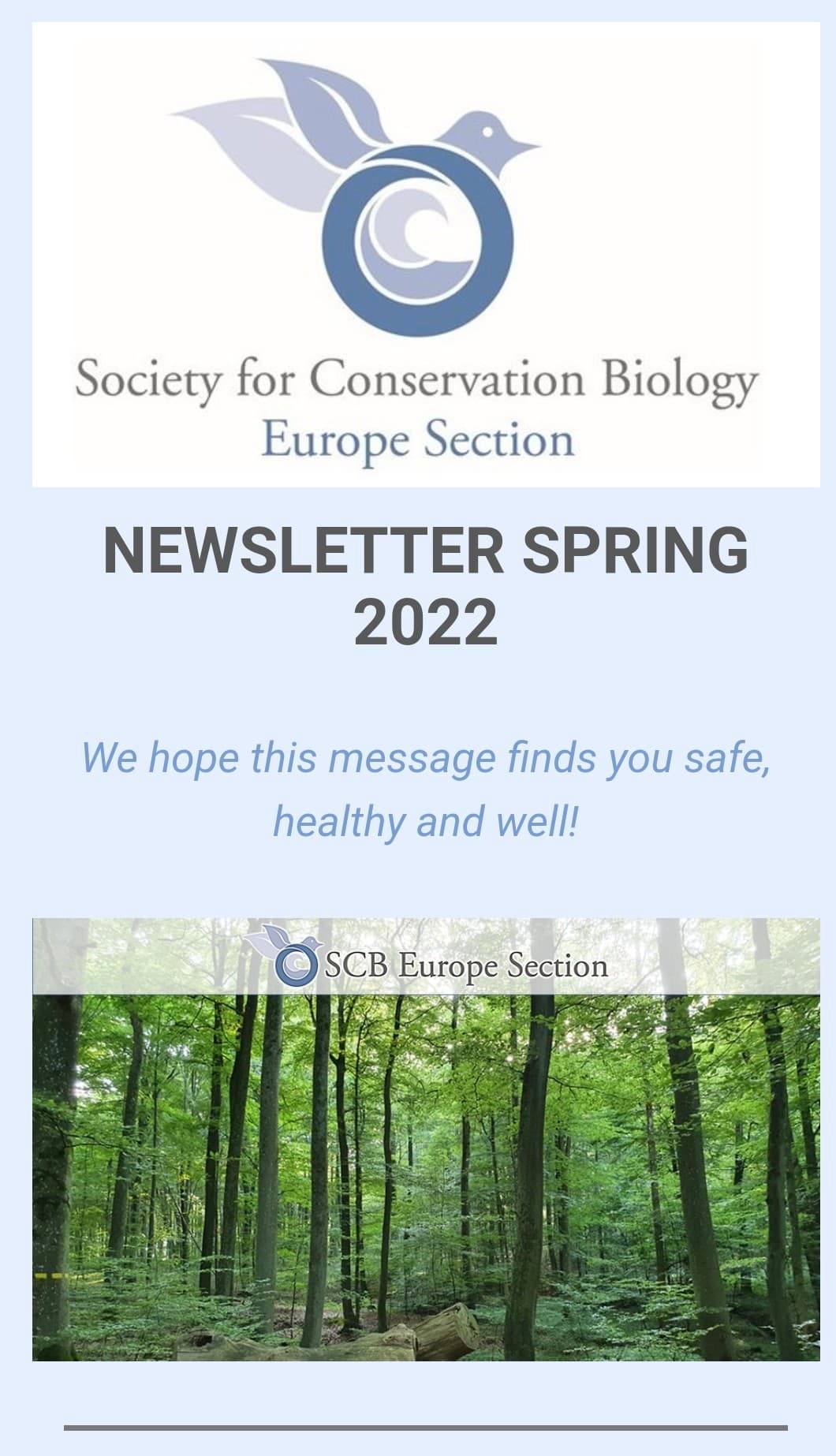 New roads and other infrastructure are banned to protect from further road fragmentation on six iconic mountains in Greece, as a start of a broader national roadless policy. The Greek Prime Minister Kyriakos Mitsotakis announced the conservation program “Untrodden Mountains” at the Climate Change Conference (COP26) and presented it on 21 January 2022 through six ministerial decisions signed by the Deputy Minister of Environment and Energy Giorgos Amyras. The legislation precludes all artificial changes to the natural environment that alter the character of six pristine mountains of the country. This means that 974 km2 of mountain lands will remain unchanged (0.74% of Greek land).

The Society for Conservation Biology-European Section (SCB-ES), an international organization of conservation professionals representing 28 European countries, considers it as a pioneer initiative in Europe and a crucial step to mitigate the climate and biodiversity crises. “We hope this important initiative will continue in Greece and will encourage other European countries to maintain the last wilderness roadless areas in Europe”, says John Piccolo, Chair of SCB-ES.

Europe is the most road-fragmented continent, but still holds large tracts of unfragmented natural lands. Scientists have been calling for halting infrastructure expansion in areas of high biodiversity and for implementing roadless policies for biodiversity and ecosystem function preservation. While roadless areas have been protected for 20 years in the USA under the Roadless Areas Conservation Rule, Greece is the first country in Europe that legally tackles the root of the problem: road sprawl, which is an unstoppable driver of land use changes. The EU’s 2030 Biodiversity Strategy commits to protect a minimum of 30% of the EUs’ land area and to provide strict protection to one third of this. “It is paradoxical that at the same time that billions of Euros will be invested in restoring degraded lands under the EU Biodiversity Strategy, natural and pristine ecosystems remain vulnerable to new roads and land-consuming projects” says Vassiliki Kati, the Greek Professor from the University of Ioannina, lead author of the publication that provided evidence for this political decision. Providing a legal roadless status to the remaining unfragmented lands will be a straightforward and cost-effective way to tackle both climate and biodiversity crisis at the EU. This roadless policy should inspire conservation policies in other parts of Europe and the world.

This is part of the Roadless Initiative of the Society for Conservation Biology.